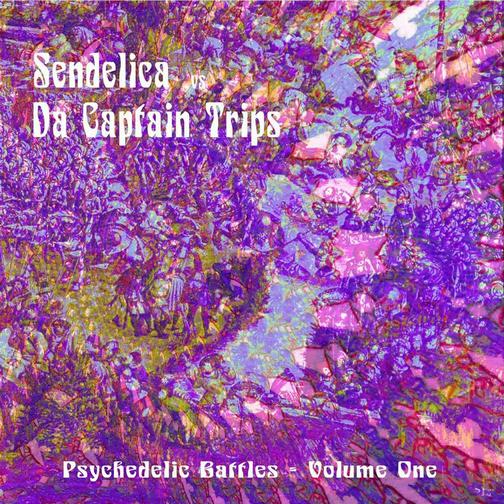 Here we’ve got a split album between Welsh Space/Psych rockers Sendelica and Italian psychsters Da Captain Trips. Sendelia’s side consists of Day Of The Locust, a 23 minute “Geoff Chase mix” of the track that originally appeared on the 2010 Streamedelica She Sighed As She Hit Rewind on the Dream Mangler Remote album. The first half of this epic jam consists of monster heavy spaced out hard Psych rock with a tightly wound bass and drums rhythmic pulse and killer left/right channel guitar action. The band are tight as a knot throughout and the energy and intensity never wane as bass and drums relentlessly propel the musical motion while the guitars solo in acidic space. Though not always prominent there are electronic embellishments, but Pete’s guitars seem to be handling the cosmic factor just fine. The second half is more of the same but becomes a brain searing shock of aggressively harsh acid-noise Space Rock. Wow, what a ride. This sucker will leave you head spinning and drained. Freakin’ awesome.

Da Captain Trips’ three tracks are a considerably milder contrast to Sendelica’s sonic assault. The Repentant Blacksmith gets a steadily funky and slightly Bluesy Psych rock groove going with tasty soloing guitar, hypnotic synth waves and freaky electronic effects. Some of it brings to mind a more Space Rock version of Colour Haze. Horizon is a nicely melodic jam with Proggy keys that gets increasingly intense as it goes on. Ditto for Space Tide, a loose melodic jam that trips along, sometimes quietly and sometimes more heavily in Psychedelic space.

Throughout it’s over two decade history, Alien Planetscapes was headed up by Doug “Dr Synth” Walker, who tirelessly, and often with much frustration, steered the band through countless lineups, from duo electronic pairings to multi-instrumental Space Rock big bands. Doug passed away in 2006, but Alien Planetscapes alumnus Richard Orlando has started making archival recordings available, some of them quite rare. These are no frills packages where it’s the MUSIC that matters, and all proceeds go to Doug Walker’s son Evan.

Official Bootleg #7 is a compilation of live performances, studio outtakes and radio cuts. Love Shack Radio and Gravel are both tracks that would end up on Alien Planetscapes’ 1997 CD album Life On Earth, and features one of the most accomplished, tightest and smoking lineups in the band’s history. Love Shack Radio features Prog and Jazz infused Space Rock that jams authoritatively amidst a bubbling cauldron of electronics. We also get a shorter second version of the song that distinguishes itself from the first with blistering guitar solos that dominate the track. The synths achieve battle in space levels on Gravel, firing on all cylinders alongside a combination of Beat lounge flute/sax Jazz grooves and demonic Rock riffage.

Next we get a March 1990 WKCR radio cut that I recognize from an old Alien Plantetecapes cassette album. This is the band in one of their big band periods, featuring scorchingly intense and absolutely mind-blowing Space Rock with emphasis on the ROCK and monstrous playing from all musicians. If the Mahavishnu Orchestra decided to become a Space Rock band they might sound something like this. It brings a tear to my eye hearing such incredible music and imagining if it got the kind of exposure it deserved. Next is an excerpt from the 1992 Radio Special Volume VIII cassette album and features the heavy rocking with double saxophone dueling with keys Jazz-in-Space side of the band.

The 14 minute Herb’s Dream (dated 2000) is new to me. The musicians are clearly in the formative stages of putting a piece together as it’s a pretty loose jam. The guitar starts out with a Psychedelic Bluesy feel but ends up in ripping fuzzed space. There’s some energetic Jazz flute soloing alongside the guitar which sounds really nice. We’ve got space synths galore and a lo-fi but cool sounding Herbie Hancock styled keyboard solo.

A standout track is the 12 minute appropriately titled Experimental Improv from an unknown date. This is a fascinating piece that features a different side of Alien Planetscapes, consisting of spaced out sound exploration and some downright haunting horror movie soundtrack themes.

Pre-Flight is dated Sept. 2001 so… maybe from the Strange Daze festival? Probably not; I don’t think Doug jammed on flute like this at that performance. Regardless, this is a cool Soft Machine in space jam with intense acidic guitar and ripping solos, flute and electronic effects mania.

Finally, we’ve got a brief preview of the forthcoming Green Mars album, featuring a 1999 electronic Doug and Richard Orlando recording from 1999 which is the follow up to the Blue Mars CD Rich released last year.

If you never had the chance to explore the many 1990s versions of Alien Planetscapes, especially the pre-Life On Earth lineups, then this is an outstanding collection that you should check out. 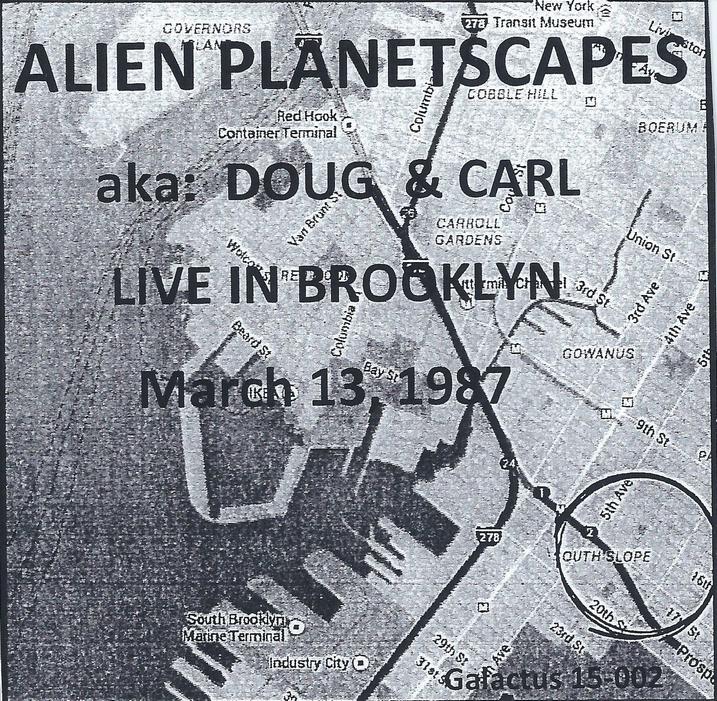 Here we’ve got a duo electronic edition of Alien Planetscapes with Doug and Carl Howard. Carl was quite the energetic make things happen guy in the independent music underground in the 1980-90s. He recorded as Nomuzic, ran the Audiofile Tapes label, and published the short lived but excellent Artitude music paper. AND he was in the late great Space Rock band Born to Go, who sadly left no official recorded legacy and most people only know about if they saw the band perform live.

The sound quality of this live performance (that Carl remembers as being in a dive bar that no longer exists) isn’t great, but certainly good enough to be of interest to AP geeks like myself who can get a sense of what was created. It’s nearly 60 minutes of electronic space excursion with an experimental edge. We’ve got gradually drifting soundscapes and a variety of bleeping, howling and other alien effects, plus sporadic bits of percussive clatter. What I like best is the subtly but ever changing moods and interesting use of effects. The music runs a gamut that includes drugged electronic orchestral ensemble, playful cosmic whimsy, sci-fi soundtrack narrative, haunting drones, effects-laden floating space electronica, and all manner of exploration. The three tracks are titled Selma Freedom March 1965 Parts 1-3. As Doug says near the end: If you don’t know what that means, go back and check your history. 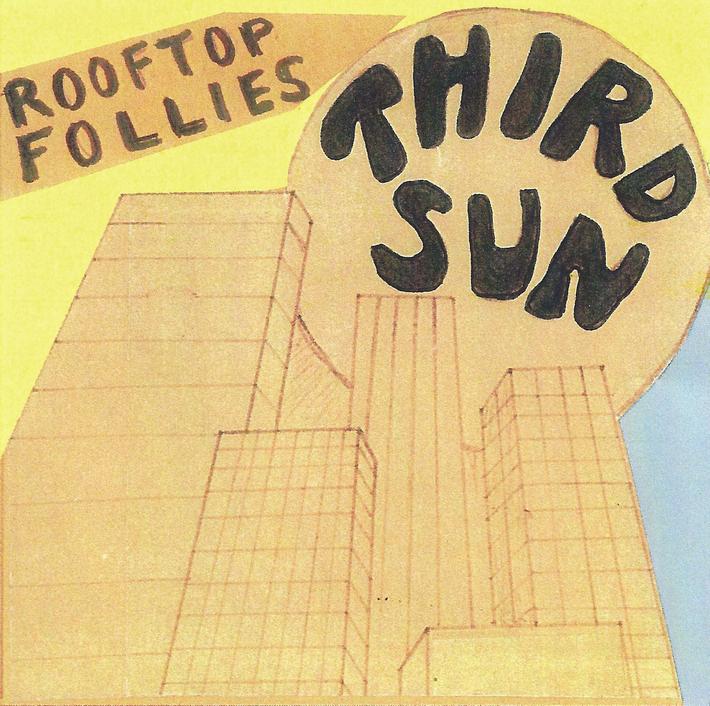 Finally we have a real treasure from Doug Walker’s past. Third Sun was a pre-Alien Planetscapes band that existed from 1971-77, and like Alien Planetscapes the lineup was continually fluctuating. I had previously heard two Third Sun recordings on an old Sound Of Pig label cassette called The Baby M Trial, which featured a 6 piece lineup from March 1976 and a 4 piece from May 1976.

Rooftop Follies consists of a 55 minute July 1976 set by the trio of Doug Walker on alto sax, flute, vibes, and percussion, Pablo Calogero on alto sax, flute and percussion, and Ron McCalla on electric piano and percussion. The music is a blend of Prog-Jazz, Canterbury, Soft Machine, Sun Ra, and a variety of free-form avant-but-accessible Jazz workouts. Comparisons could be made to The Muffins, a regional contemporary of Third Sun who I know Doug was a fan of. I like the jamming sax as the electric piano tinkles a pleasant melody and the percussion sets a tribal grooving beat. The dueling sax and flute with the piano playing mediator is fun. The music is beautifully melodic throughout and the electric piano sound is lulling. Much of it has a narrative feel, like it’s the soundtrack to a children’s theater Jazz production. A real treat for those of us who want to know as much of the Doug Walker historical record as we can get our hands on.