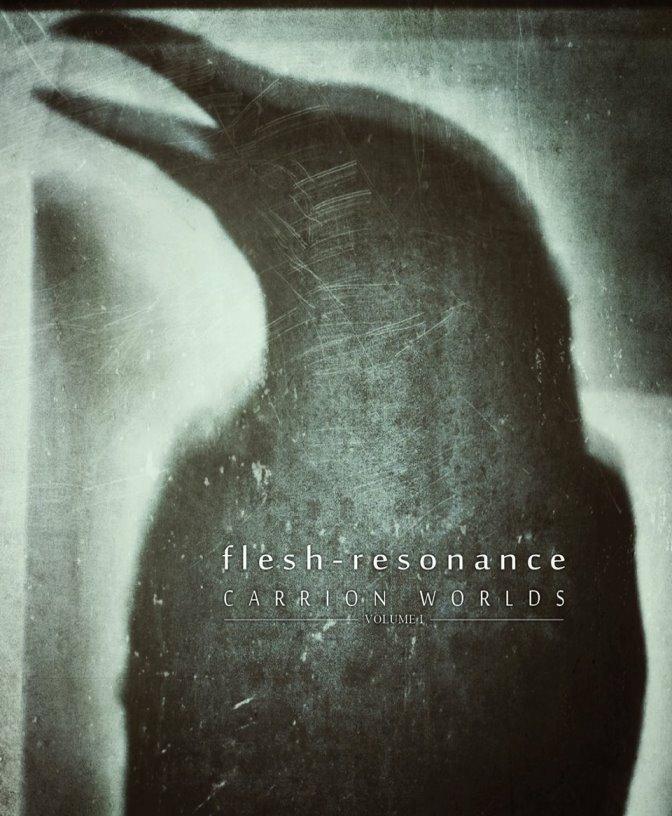 Flesh Resonance is the duo of Keith Hill and Tony Longworth, who are giving the digital reissue treatment to their 2004 released Carrion Worlds Volume 1 album. Hill may be known to many Aural Innovations readers from his Space Rock band Civilian Zen, though he has been in loads of other bands and I even did an Aural Innovations Space Rock Radio special dedicated to him last year (see link below).

The 12 tracks on the album are an intriguing string of themes, where a prevailing Gothic mood and dark romance are joined by spacey ambience and cinematic atmospherics. The album as a whole is characterized by both song and image inducing soundtrack, as rhythmic vocal numbers intersperse with soundscapes, sound collage and voice samples.

The set opens with a Gothic soundscape intro which soon launches into a searing but melodic Rave-Industrial vocal number. This leads to a surreal yet alluring combination of Gothic moodiness, spacey atmospherics and traditional Italian restaurant theme. I like the contrasts that transition seamlessly as we’re next treated to a darkly seductive Gothic song with chunky Metal guitar and robotic electronica elements, which is followed by yet more atmospherics plus strange, spectral voice samples and soundscapes. But just as we’re settling into a dreamy pattern, Flesh Resonance once again leap on the dancefloor for what feels like a blend of Rave-Industrial and Porcupine Tree with Helios Creed guitar. Back and forth we go as the song segues to a dark and spacey Gothic melancholy with piano melody, before developing into a spooky sound collage that strays from Goth to Suspiria styled horror. One of the most jarring transitions of the set jolts the listener as this is followed by a combination of space electronica, looped guitar, futuristic themed voice samples and Dream-Pop song, and, finally, a return to the opening theme which peters out with waves gently splashing against the shore for the finale.

After a few listens it’s clear that Carrion Worlds Volume 1 is a Gothic soundtrack experience that must be experienced in its entirety to really appreciate. Flesh Resonance do a fine job of bringing together Goth themes and cinematic sound collage plus just enough other stylistic elements to keep things interesting.

Carrion Worlds Volume 1 is available for download from Amazon, iTunes, CDBaby and Spotify.
Visit the Flesh Resonance web site at: http://www.fleshresonance.com
An all Keith Hill special is still available on Aural Innovations Space Rock Radio. CLICK HERE and scroll down to show #335