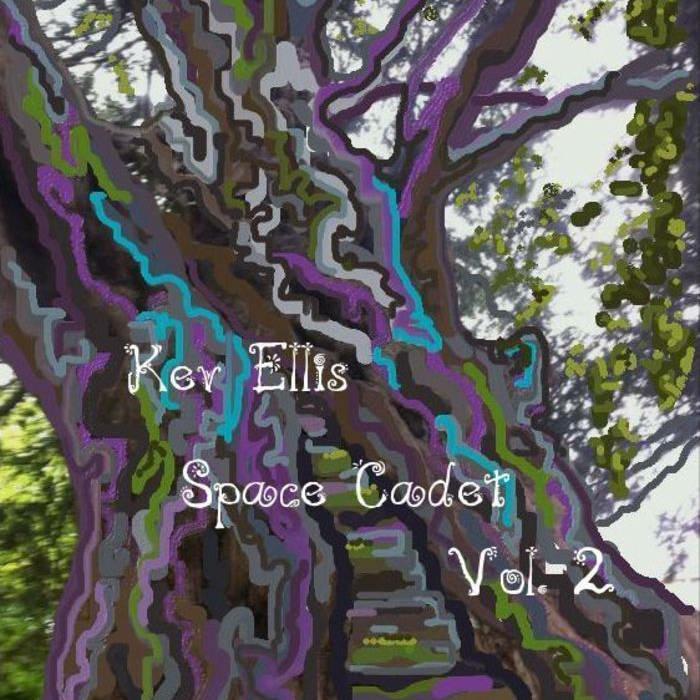 Kev Ellis (Dr Brown, Bubbledubble, Sonic Arcana, Trev & Kev, Spirits Burning) is back with Volume 2 of Space Cadet, the first of which was released last year. Kev plays all instruments except for guest guitarist Grant Macnaughton on two tracks.

The first three tracks, which Kev calls Turkish Sunset, started life as ambient recordings Kev made in Turkey. Slowly Circle The Sun may only be 2 minutes long but it’s an ass kicking opener, combining Hawkwind styled Space Rock with trippy Psychedelic song and a bit of harmonica Blues injection. Turkish Sunset is next and at 11 minutes is far more of a stretch out tune. It kicks off with a spacey intro of bubbling synths, followed by a steadily building rhythmic pulse that develops into an Eastern flavored, hip swaying, Dub infused Space-Trance groove. I really dig the trancey, dancey, deep space hypnotic drift, punctuated by mesmerizing synth lines, gently swirling effects, and occasional shaman chant vocals. Together, Cosmic Dancers is one of my favorites of the set, being a really cool rocking blend of Space Rock, Folk-Psych and acidic Blues. Totally trippy lyrics too.

The remaining three tracks that comprise the Venice Evening portion of the album started as ambient recordings Kev made in Venice. Slowly Sliding Outside Your Mind starts off as a chill-out groove tune with Blues harmonica and lots of samples from the streets, before breaking into a full on Blues-Psych/Space rocker that recalls Kev’s Dr Brown days. It then returns to the opening theme as it segues seamlessly into Creatures Of An Altered State. I could feel the sense of strolling down the street as people chat and street musicians play, and all the while a pulsating electronic pattern weaves its path and soundscapes drift. But soon the harmonica starts to wail, the rhythm section kicks in and Kev breaks into his shaman vocals for more Eastern flavored, Trance steeped Psychedelia. Finally, To Stare From Your Eyes starts off in strumming acoustic guitar mode but quickly becomes an orchestral Folk-Psych song with fun sci-fi synth embellishments. Beautiful guitar solos too. For lyrics and vocal number this is a good pairing with Together, Cosmic Dancers.

Just like the Space Cadet that preceded it there’s lots of tasty variety on the album, bringing together all kinds of Space Rock and Psychedelic influences. Space Cadet Vol. 2 is available in CD and download editions, but if you want the CD you better hurry because there are only 100 of them. 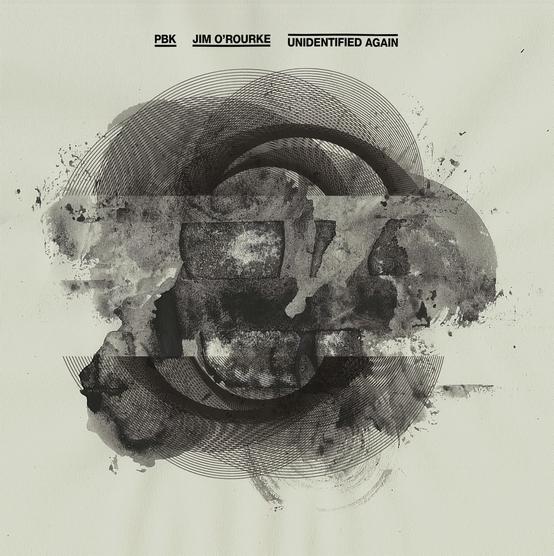 Though veteran electronic musician Phillip B. Klingler (PBK) and fingers in just about everything guy Jim O’Rourke have been in contact since 1989 and periodically plotted a collaboration, it took until 2014 for it to occur and the result is this 2-LP set of four side long excursions.

Fasten yer seatbelts and prepare for liftoff because we’re blasting off into space! The Turning Night opens the set with PBK and O’Rourke combining classic floating space electronica, drones, pulsations, oscillations, and myriad effects to create a space journey meets sound expedition experience. There are elements of early Tangerine Dream, K/Cluster and other electronic pioneers on the one hand, but also experimental sound sculpture, though it’s all within a bowels of the spacecraft, soundtrack for your sci-fi trip setting. The music alternates between busily and intensely harried and more soundscape/ambient, with these quieter moments being laser focused on specific sounds. It’s very well recorded and mixed.

Myths In Translation starts off a bit more aggressively harsh but quickly transitions to a subtly trippy parade of effects. I felt like I was drifting through some dark alien forest as the sundry bleeps, chirps and buzzes of the inhabitants make their presence known. But soon a swirling ambience starts to build in volume and intensity, distorting the mental imagery as nature and the cosmos morph and melt into one another. Later things calm and we’re back in a quieter sound effects realm, though along with the space ambience we also hear more earthly/human sounds, like someone puttering in their workshop, before the engines rev and we’re catapulted into a high intensity and somewhat dense noise and effects dirge. Quite an array of moods and emotions on this one.

End Of The Landscape begins with a whimsical swarm of electronic static and effects that’s like a strangely rhythmic combination of shortwave surfing and robotic insect throng. After several minutes, multiple layers of almost orchestral howls and sound waves join in, along with other miscellaneous blasts of sound, creating a symphony of cosmic noise. But the music doesn’t get overly harsh. It really is like an experimental sound and noise symphony, especially given that each of the many components occupies an audibly distinct place in the sonic milieu.

There are moments on Long Lain In The Stream that are among the most musical of the set. A few minutes in I felt like I was on the high seas of space with a fog horn blaring, but as the intensity fades a pleasant melody tinkles along an ambient drift. Later there’s a dreamy segment with pulsating drones and rolling static plus a sparse melody that sounds like might be guitar produced. But things don’t stay dreamy for long as hair raising, high pitched blasts take over, though amidst the chaos there’s a Space-Prog synth melody that provides a calming counterpoint to the threatening sensory attack. A very cool and creatively confusing combination of song and experimental sound exploration.

In summary, Unidentified Again is a challenging yet accessible blend of space excursion and experimental sound assemblage. There is a LOT happening here, making for a busy but by no means overdone listening experience, which means that there is a lot to digest and new treasures reveal themselves upon repeated listens. Put on the headphones, surrender, and enjoy all the fun imagery the music conjures up.

The LP is available through the Norway based Pica Disk label at http://picadisk.com and in the U.S. through Tedium House at http://www.tediumhouse.com 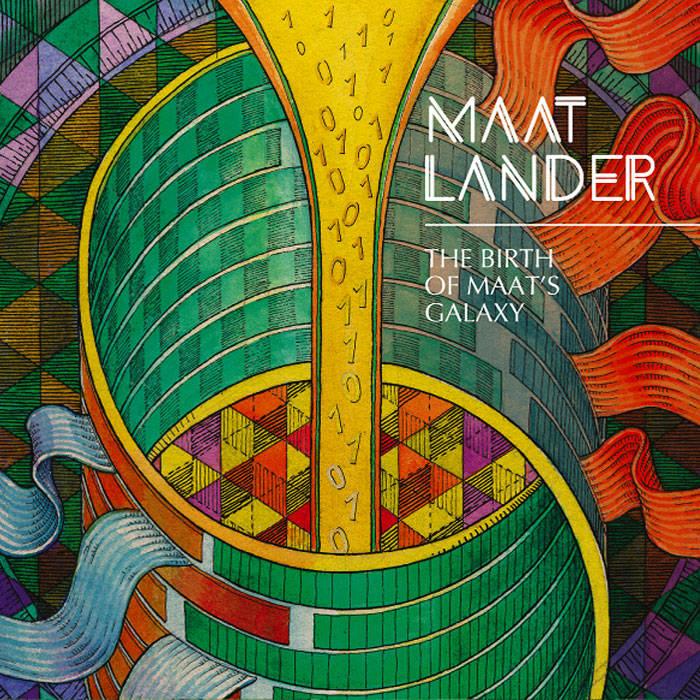 Maat Lander is a new instrumental Space Rock trio that brings together members of two of my favorite R.A.I.G. label bands: Ilya Lipkin of The Re-Stoned (guitar, mandola), and brothers Arkadiy (keys, synths, bass) and Ivan (drums, percussion) Fedotov of Vespero. This 10 track set is a winner from start to finish, with tracks in the 4-9 minute range.

The Comet Rider opens, featuring totally cosmic, tightly wound Space Rock performed with a high level of musicianship like a combination of Vespero, Ozric Tentacles, Hidria Spacefolk, Oresund Space Collective and Korai Orom. Alnilam is an alien ethno-trance blend of mandola, ethnic percussion, soundscapes and oodles of sci-fi effects. Maat Lander inject a pounding rave worthy rhythmic pulse into Spiral Arms, which rocks hard and includes killer ripping and screaming guitar. To Johannes Kepler and Gliese 581 are both beautifully atmospheric and cosmically haunting excursions that you can float and groove along with. Two Keys To The Sky is similar and includes some Bluesy Dave Gilmour-ish guitar. Aquarius is a high energy and sometimes whimsical blend of Space-Prog, Jazz Fusion, the Ozrics at their most rocking, and spaced out atmospherics. Lunar Rocket blasts off the launching pad for some powerhouse Space-Prog with seductively melodic but also dirty rocking guitar solos and a frantically swirling stew of space electronics. Coma Berenices starts off with a combination of sequenced synths, falling star electronic effects, steadily potent drumming, Prog guitar soloing and soundscape guitar, but then bursts into the stratosphere as an in-yer-face, heavy duty Space Rock blast, while always retaining an overall atmospheric feel. Finally, the title track is an electronic heavy track that’s a steadily grooving and melodic jaunt through the cosmos. It’s got some cool Bluesy jamming guitar and classic Prog keys too.

I’ve long known from the Vespero albums what excellent musicians the Fedotov brothers are, but Ilya Lipkin REALLY shines on guitar. We don’t get to hear him play like this on The Re-Stoned albums. Really smokin’ guitar solos. BUT the guitar also contributes to soundscape creation, making for a hot atmospheric combination of guitar and keys/synths. Fans of instrumental Space Rock and rhythmic atmospheric explorations played by smokin’ hot, creative musicians should drop whatever they are doing and get this NOW. Highest recommendation!

For more information visit the R.A.I.G. web site at: http://raig.ru
Stream, download and purchase this and other R.A.I.G. releases at: https://raig.bandcamp.com