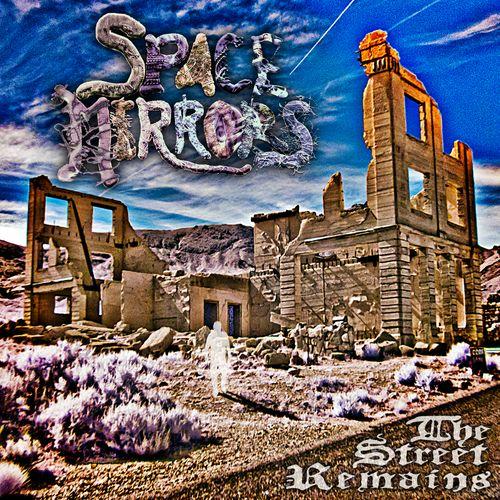 The Street Remains is a mini-album (though over 40 minutes) that is intended to be a teaser in preparation for the next full Space Mirrors album, Stella Polaris, which will be the third and final chapter in the Cosmic Horror series. Stella Polaris is scheduled to be released in August.

In The Blood opens and is an extended version of a song that will be on the Stella Polaris album. It’s characteristic of the unique brand of Prog-Metal with Space Rock influences sound Space Mirrors has developed. Martyr’s vocals are difficult to describe, having a somewhat monotone yet recognizable and elusively emotive quality that occupies an odd point on the singing/spoken word axis, and very much a vocal style I’ve gradually tuned into over the past several Space Mirrors albums. Earth Gods Dance is the same song that was on last year’s Golden Path EP, which was itself an outtake version of the title track from the previous year’s The Other Gods album. The difference with the version on The Street Remains is Alisa made some corrections to the mix.

We’ve also got three diverse choices for cover songs which Space Mirrors give their own trademark sound to. Originally recorded by Morbid Angel, The Ancient Ones is a spacey and high energy Prog-Metal rocker that goes cosmic thrash at times. The Space Mirrors band are really tight and lace the music with some killer chunky guitar. I Breathe was originally recorded by Swedish Pop combo Vacuum. Space Mirrors lay down a bouncy, even dancey beat, but there are oodles of UFO electronics and Martyr’s vocals stray into more purely “singing” territory, though he’s no less darkly threatening than usual. Fans of the American comedy/drama vampire television show True Blood will know the Bad Things theme song. Space Mirrors retain the sultry swagger of the original but inject spacey synth waves and effects, and when Martyr says he wants to do bad things with you it sounds downright scary.

Finally, Rituals of Shub-Niggurath is a 15+ minute epic that is exclusive to this set and includes Nik Turner on flute and sax. It begins with a darkly atmospheric intro and Alisa putting on her demon hat for the spoken word narration. Symphonic Goth keys kick in after a few minutes along with tribal drumming and Nik jamming along on sax and then flute. It’s all very Space-Goth-Prog orchestral, but with a flowing ambient-soundscape drift, and even gets into electronica territory near the end which sounds pretty cool accompanied by wailing Mellotron sounding keys.

Wow, lots of really cool variety on this one. Kudos to Alisa and company for continually exploring new territory and keeping things interesting and exciting. Can’t wait for Stella Polaris!