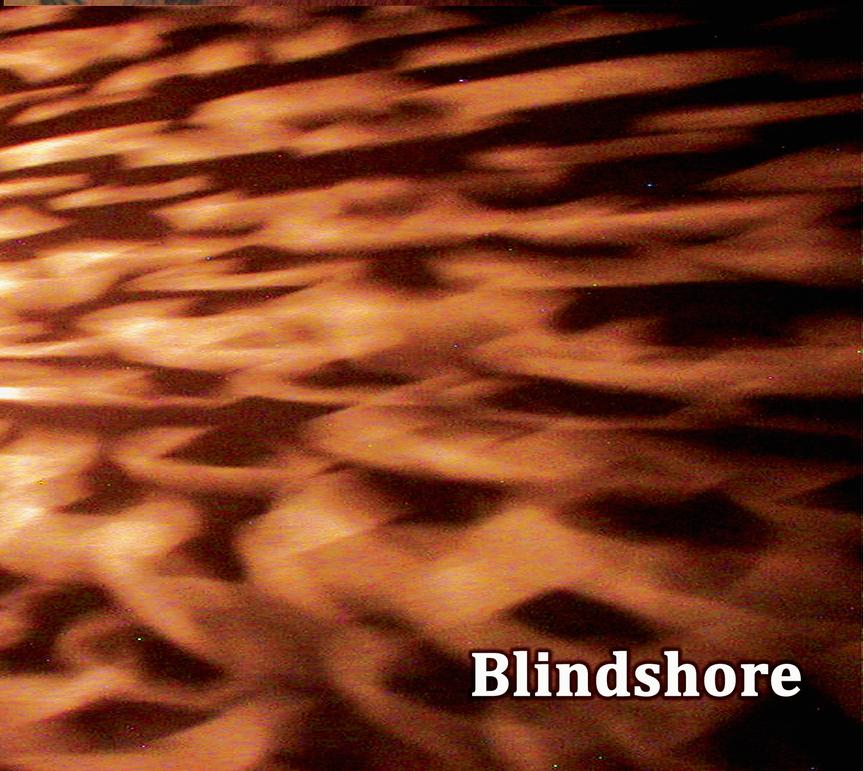 Blindshore is the new solo project by longtime Austin Texas musician James Adkisson. I got to know James in the late 90’s when my band ST37 was playing shows with his band 7% Solution and years later when Book of Shadows played with his band A Five and Dime Ship. He has a new band with longtime collaborator Reese Beeman called Lacuna Incorporated who played a very impressive set with ST37 recently, anyway it’s good to see the old spacerockers still kicking ass!! On to the revew:

CALLING: Yes, it’s very Robert Calvert sounding, and that’s a good thing! Very big clear sound! If it wasn’t illegal to have real music in the Top 40 all of Jame’s albums would be there. Nice bass by David Dreesen (and for all you Hawkheads who’ve never heard of Robert Calvert consider it your duty to track down his stuff with Hawkwind and his solo albums!!!). TEETH OF THE DAY: Slow creepy coolness… nice vocals by James… stays same sub-tempo for whole song. DRIVE: More creepilicious drum machine and tempo with the tripped out vocals!! And more of the Robert Calvert vibe. SOME SOMEDAY: Continued pure goodness, a bit more uptempo on this one but still an almost Cure sound. And the nice bass keyboard by Reese Beeman. GRAVITY: Backward guitar intro and then some keyboard with the big techno drum!! And the noisy/cool guitar along with the big bass and vocals from the universe next door!! The louder the better!! Nice backup vocals by James!?!? Wish there was a lyric sheet (oh, there is at www.wix.com/amjams/blindshore ). DAMAGED: Nothin’ like Blag Flag’s Damaged but that’s prolly a good thing. More Calvert-esque mid tempo cool-space pop songs for those who are plugged in. And the disjointed vocals from a broken radio. FLOWER BIRDS: The big almost metal guitar on this one and more groove drum machine… “these words are birds I cannot catch”. ANOTHER SONG: and more of the same space lovliness… “the story of my life is the story of your life”…. yes, some pretty damn cool lyrics and vocals and everythings. Gemini Suite-ALL MY NIGHTS: Still, late nite instrumental, the first track of the Gemini Suite. Kinda reminds me of Carnage Visors by the Cure. Then some weirded out female? vocals thru a spooked out 1920’s megaphone. Then the James Adkisson vocals, almost a Van der Graaf Generator sound on this one. Very other worldly. Some alien chatter and disembodied radio from the other side. Now, the Elvis “Love Me Tender” from the Outer Limits, not sure what it all means? but sounds cool. There’s some Tim Buckley in here too but I haven’t picked it out yet!?!? Was Elvis a Gemini? TOO FAR: Big heavy rawk drum and riffing, some Chrome like guitar. The hypno road music beat that can go on forever. My wife Sharon says “this is pretty superb music”. HOLLOW SONG: This has a Herbie Hancock meets ST37 feel to it. The snakey Rastaman bass… gets almost frantic. THE MYSTERIOUS BONUS TRACK: A bit of an add on track but still strangely strange and interesting… and it’s over. True treats from outer space.

For more information you can visit the Blindshore web site at: http://www.wix.com/amjams/blindshore