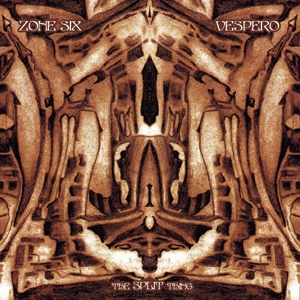 This new split album, which they cut to the chase by calling The Split Thing, brings together two of contemporary Space Rock’s hottest bands. From southern Russia, Vespero have released several albums on the R.A.I.G. label that keep getting better all the time. On The Split Thing they get 3 tracks, each between 7-9 minutes. Nüllus features dual psychedelic guitars and keys that build around a repeating melodic riff. It’s atmospheric, it rocks, it’s spaced out and has a Prog rock quality too. The music trips along for the first 5 minutes or so and then really rocks out for the last couple minutes, with ripping guitars, proggy keys, bubbling space electronics, and flute. Vespero demonstrate their flair for combining Rock and spaced out atmospherics on Clouds, which brings to mind a cross between Korai Orom and Ozric Tentacles. And Lifeless Pillars is a 9 minute Space-Prog excursion that takes several thematic twists and turns, including some interesting rhythmic driven segments.

From Germany, Zone Six have been around since 1998 with several lineups, all including the constant of Dave “Sula Bassana” Schmidt (who also heads up the Sulatron Records label). In the latest version of Zone Six Dave takes the drum seat, with Komet Lulu on bass (from their other current band Electric Moon), plus Rainer Neefe from the Pancakes on guitar and members of Vibravoid. The band contribute a single 24 minute instrumental – Babapapatantramanta, which is dark and doomy and totally spaced out. We’ve got classic Space Rock bleeping and gurgling synths, molten lava dripping acid drenched trip guitar, and a potent rhythm section. There’s an edge-of-your-seat sense of tension and foreboding throughout and I love the deep space Stoner vibe. File under T.F.S.R. (Total Fucking Space Rock)

An outstanding combination of bands. The album will be available sometime between now and the end of April in CD & LP editions.

For more information you can visit the Transubstans Records web site at: http://www.transubstans.com