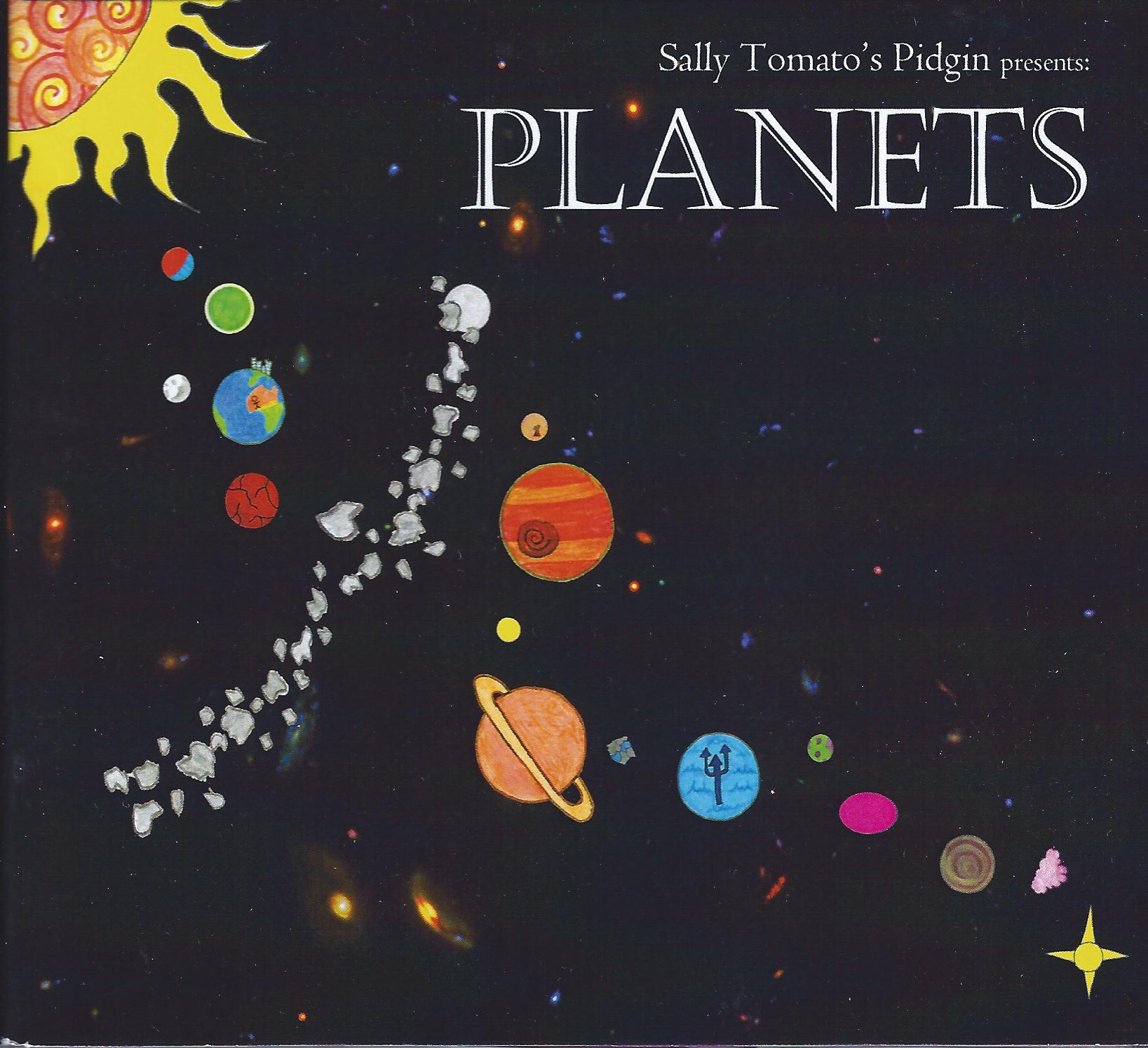 When looking for spacerock inspiration, what better place to start than right here in our own solar system? In the early 1900’s Gustav Holst brought us a musical meditation on “The Planets”, and almost a hundred years later the subject is revisited with Planets by Sally Tomato’s Pidgin (a less spacerocking name would be hard to imagine!). Conceptualist and vocalist Sally Pidgin (who has starred in autobiographical rock opera/movie Toy Room in 2010) is backed up by Eric Flint on drums and percussion, and Carlos Severe Marcelin on “everything else” (Sally’s enignmatic contribution on the CD sleeve is to play “herself”). Although taking inspiration from that same subject matter as Holst, Planets is not a rock adaption of that classical work, but rather an original (or nearly so) song cycle that takes the listener on a trip outwards from the sun and into the void. Not only that, Sally and co have provided an even bigger bang for your buck; Holst worked his way through only seven planets, while she has included all nine of them, plus other heavenly bodies including the astroid belt, sun, dwarf planets and assorted moons across 20 mostly instrumental tracks in just under 60 minutes.

The journey starts with Sol, with Sally’s ethereal whisper floating above gentle keyboards and finger-picked acoustic guitar, swiftly joined by harmonised electrics and stately electronic backing. In spite of its weighty subject matter, the music does not come across like some overblown prog-metal epic, but rather bright and clear moments of pop music, focusing more on melody than heaviness or musical virtuosity. This feeling is continued across Mercury, before some slightly harder-edged guitars kick in. Venus continues in a similar vein, followed by a brief 30 second percussive stopover on Earth’s Moon (here entitled Luna). Arriving on Earth, we are greeted with a rather intentionally-cheesy ’50’s movie voiceover selling us a budget travel tour of the planet, featuring “men and women in unusual positions”, and sound bites from satisfied customers (“They have all the best recipes figured out”). The acoustic guitars recall visions of Steve Howe, and its four minutes make it one of the longer tracks on the album. Mars eschews any of “Bringer of War” heaviness, but does feature some cutting harmonised electric guitars. Main Belt manages to get closer to heavy metal across its two minute duration with shredding guitars and double kick drums, which cut out a little too early, although I guess there is still a lot of space left to travel. Trips to smaller moon and asteroids – Pallas, Ceres, the beatless and purely electronic Io and Titan – are generally compact soundbites, whistle stops between the main destinations. Jupiter has more of a pop/rock fusion feel, and is inspired by Mozart’s Jupiter Symphony No. 41, which predated Holst’s work by over a century; five minutes in length, it feels like one of the more fully realised tracks on the album. The tuneful Saturn sounds like mid-’70’s style Genesis with multi-layered keyboard parts and acoustic strummed guitars, again with a duration befitting one of the largest planets in the system. Neptune” has a precise ’80’s prog feel to it, while Oberon features a rather cosmic voiceover by Sally. The tricky time signatures and jarring voices of Uranus contain elements of King Crimson mathrock as played by a Victorian amusement park roundabout! Pluto features a press statement from the Society for the Preservation of Pluto as a Planet (www.plutoisaplanet.org). The journey ends with dwarf planets Haumea (brief Eno-esque piano notes and wordless keening vocals) and Eris, which features samples from such sci-fi gems as Lost in Space, before the infinite void is reached.

Planets lacks the heavy instrumental jams that have come to be typically associated with the genre known as spacerock; however, its carefully composed and tastefully executed themes make it worthy of exploration by fans of the more dreamier and pop-oriented side of classic progressive rock.

For more information on the band, go to http://www.SallyTomato.com
Visit the Severe Recordings website at http://www.SevereEnterprises.com