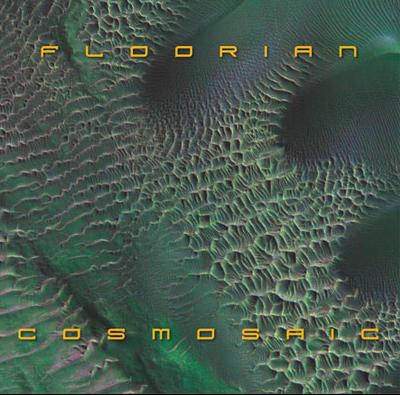 Cosmosaic is Columbus, Ohio based Floorian’s third CD and the follow-up to 2009’s More Fiend. In the interim they have worked slowly but steadily, with perfectionist ears on the new album. A couple years ago they did a short east coast tour, hitting New York City and Cambridge, MA, toured as support for the Brian Jonestown Massacre, in May of this year did a brief tour of the west coast, and most recently (July 28th) did their Cosmosaic release show at Columbus’ Rumba Café, which I attended and heard a selection of songs from all three albums. On Cosmosaic, Floorian consists of founders Todd Fisher and John Godshalk, plus Larry Durica on drums, Jim Chittum on keyboards (previous member Bill Spiropoulos plays keys on one track), and guitarist Alex Lee Mason on two tracks.

The album opens with the 9+ minute Sine Qua Non. Starting off with drones and effects, an eerie but gorgeous mellotron-like keyboard melody kicks in, soon joined by a steady rhythmic pulse, slowly strumming guitar, vocals, and by the 3 minute mark we’re rockin’ hard. I like the combination of guitars and keys on this song. There’s a crushing wall of bashing psychedelic guitars, drugged yet lulling vocals, and an anguished screaming keyboard line. Daymare is one of the most aggressive songs I’ve heard from Floorian, being a heavy driving stoned rocker with killer tripped out dual guitar leads. In the later part of the song the band goes from stoned to full blown stoner rock. But this isn’t the sludgy stuff. The rhythm section goes stoner while Alex Lee Mason cranks out a bubbling liquid psych guitar lead. Trance Mission is appropriately titled, with its steady metronomic pulse, hypnotic drone waves, and quietly exploratory guitar. One Won’t Do Take 2 is another heavy drugged psych rocker with potent wall-of-sound guitars but also winding acidic leads. About halfway through the music descends into a meditative calm, with an intriguing combination of folk, soundscape, psychedelic and even horror flick elements. vs. is a brief sound effects piece with the “instruments” credited as cicadas & birds in the left channel and space echo in the right, and serves as a lead-in to the completely stoned acid-psych mind-melting Take IV. Daze opens with a cool combination of effects, like rushing wind, flittering alien electronics, restrained (but busting to break out) acid guitar, a robotic electro pulse, all anchored by a steady bass riff. Just after the 3 minute mark things go briefly quiet and a flute-mellotronish sounding melody calls in the song portion of the track, a drifting mesmerizing rocker that strikes a delicate balance between heavy and sedate, though in the last minute it blasts off into the space-psych stratosphere. KILLER finale! Daze segues seamlessly into Take X, which is like a space-ambient-psychedelic coda to what for me could have been a single track. The album closes with Cryptid, which at nearly 10 minutes is the longest track of the set. The music starts with an Eastern flavor from the guitars and percussion, soon joined by a ripping guitar lead, giving the music a bit of an acid-raga feel. The band jams along for a while until reaching a transitional segment that introduces the steady, ominously rocking song portion of the track. Lots of cool variety and effects on this strong closing number.

In summary, Cosmosaic will appeal to psych fans of varying tastes and stripes (space rock fans too!). While the music is easy to groove along and/or zone out to, there’s an underlying complexity that will reward attentive listeners across multiple spins.

For more information visit the Floorian web site at: http://www.floorian.com