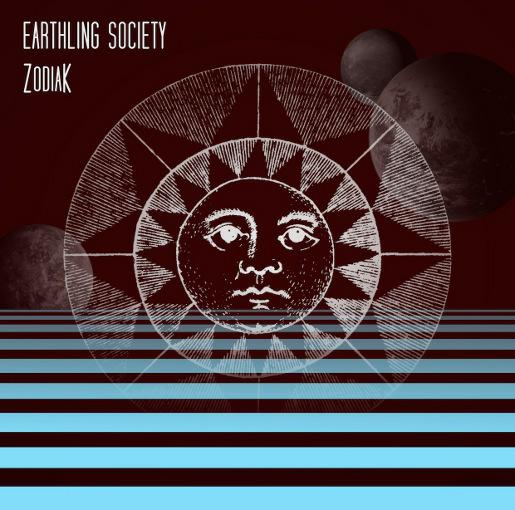 Earthling Society return with their 7th studio album, ZodiaK, a new vinyl only release (it is scheduled to come out in CD format with two bonus tracks sometime in the first half of 2013). Earthling Society have continued to evolve throughout their career, changing directions on almost every album but still retaining a certain core sound that is all their own, and ZodiaK is no exception.

Jettisoning the shorter songs heard on most of their previous albums, this time the band decides to stretch out on two lengthy cuts, the 25-minute title track and the 21-minute The Astral Traveller. In between them is a brief 2-minute instrumental called Silver Phase. It’s not the first time the band has done 20 + minute tracks. There was Plastic Jesus and the Third Eye Blind’s Kozmic Suite No. 2, Tears of Andromeda’s title track and Sci-Fi Hi-Fi’s E.V.I.L.U.S.A. But this is the first time two of them together have made up an album’s worth of material. There’s also a notable difference in sound from previous albums, as these were played and mixed live in the studio all in one day. The music is palpable; it breathes as if alive as it flows naturally from one section to the next. The sound is rawer to, less produced, with a nice gritty edge to it.

The line-up for this album is Fred Laird on guitar, vocals, bouzouki, Moog, Mellotron and syntar; Kim Allen on bass and Jon Blacow on drums. Without a dedicated keyboardist this time out, the sound is a bit less synth and electronics oriented, with more emphasis on guitars, but bandleader Fred Laird does do an admirable job of incorporating a wide range of instrumental sounds into the pallete, considering this is all played live. The title track shifts wildly through deep cosmic ambience; driving riff-based spacerock; Grateful Dead-like jamming and dreamy, psychedelic soundscapes taking the listener on a dazzlingly trip fantastic (apparently through the mind of a serial killer, according to the Nasoni website!). The short Silver Phase seems to be somewhat of a coda to the final part of the previous track. I’m not exactly sure what it’s doing here, but that is perhaps just one of the mysteries of the album that has yet to reveal itself to me. The final track on the album, The Astral Traveller, is my favourite. I found this track to have a bit of a similar vibe to Nektar’s first album, Journey to the Centre of the Eye, as it glides from spacey layers of jazzy guitar and keyboards to experimental echo chamber odysseys. But man, does this one ever catch some serious solar fire in its latter half, as the rhythm section picks up speed and we’re treated to some mind melting, epic guitar riffing and soloing. Truly exhilarating stuff!

This album took a few listens for it to grow on me, but once it did, I was hooked. It’s another excellent release from Earthling Society, a band that seems to be on an endless roll. I’ll be looking forward to hearing the two extra tracks they’ve saved for the CD release, but vinyl nuts will definitely want to pick this one up. Better hurry though, there’s only 400 black vinyl and 100 coloured vinyl copies available, and I’m sure they’ll go quickly!