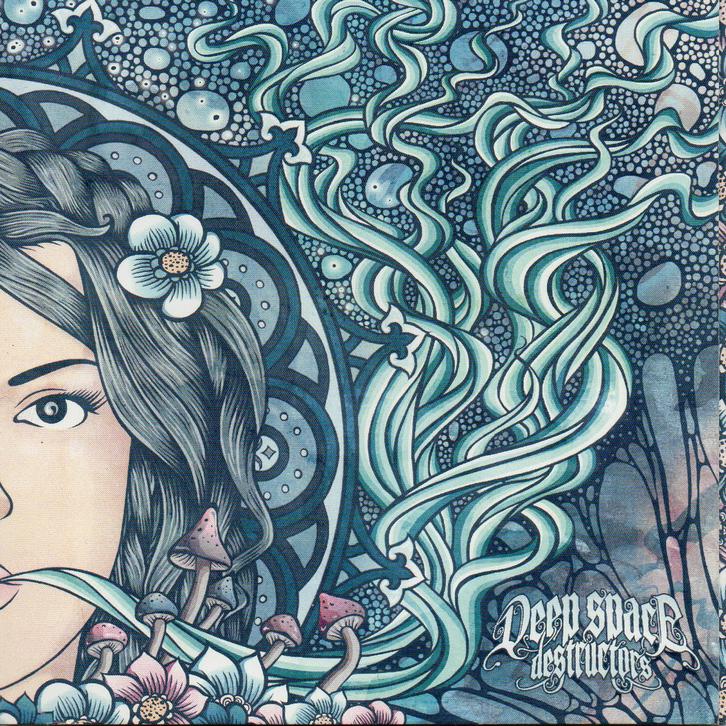 This Finnish trio start off the first of four tracks on this CD somewhat slow and droney and meditatively heavy and instrumental in a My Sleeping Karma fashion, but that is only the opener. The accented vocals sound like Dark Sun’s very similar singer as well. Maybe it’s just being Norwegian, Finland is like an strange language with its nasal accentuation and is distant to Scandinavian. If the singer had been female, it may as well have been a spacey Amon Düül II section from the Wolf City album as well. The track in question is called Beneath A Black Star. It seems from the get go this band is related to the weird kraut-goes-Doom stylings with heapings of drone one hears bubbling up with bands like Astra, with the psychedelicized kraut-goes-Sabbath influence. Deserted Planet 2078 is the next track and is a departure being less heavy, with keyboards reminding me of the first Orange Goblin album’s Star Shaped Cloud, but it does not build to a mind-blowing keyboard and lyrical climax like that song does. Its just kind of low key like Astra often do, and the vocals are present. Spacy Phantasy is next and has a vintage slowed down Fly To The Rainbow feel (Scorpions on Brain label!) but soon doomingly meanders into the Rise Above label bands like Astra or early Orange Goblin again, with heavy guitars and keyboard bits. The song gets progressive after 2 1/2 minutes, with more complex and uptempo changes with spacey vocals. Sykli is the last track, of this short album clocking in under 40 minutes, and is sung in Finnish language. It is slow at first and picks up after 8 minutes to a rockier groove.

Sorry, my Norwegian-Swedish-Danish abilities are 100%. Finnish language has roots, I believe, from an ancient slavic people that wandered north, and they have pirated Chris Cringle since the 50’s from the Norwegians who had him first. Well, not counting the Dutch who created him, before the Norwegians, but never mind. We share the Trolls, at least, and the North Pole. We are proud of Lappland which unites us all even more. Forgetting the bitterness and quarrel within the otherwise peaceful Nordic countries we belong to, in Finland there is, likewise in Sweden, a large amount of Hawkwind-related musicians, though I hear very little Hawkwind in Deep Space Destructors. They play much more like Astra, My Sleeping Karma and old Orange Goblin with smatterings of light prog influences and the Düül krauting out ca. 1973. They mellow out and come crashing in waves back in but never too heavy for the most faint hearted. The CD comes in a beautiful sleeve with titles made to read when stoned, as looking at them straight I barely make them out. The band released two albums in 2012, their debut “I” and this one, “II” at the end of the year. Jani Pitkänen plays bass and sings, Markus Pitkänen is the drummer and Petri Lassila handles guitars and backing vocals. They hail from Oulu, in a country far far far away I can assume. It’s pretty good if you go for this sort of style of Rise Above label/My Sleeping Karma brand doomishness, but it tires me a little, leaves me in a neutral mood. I give them a solid 4 out of 6 points on the dice for this effort. With a title like Deep Space Destructors I expected a fast heavy dose of Spacerock a la Hazard Wings (see other review) but ’tis not. But I like this CD, it seems subtle enough to be a grower.