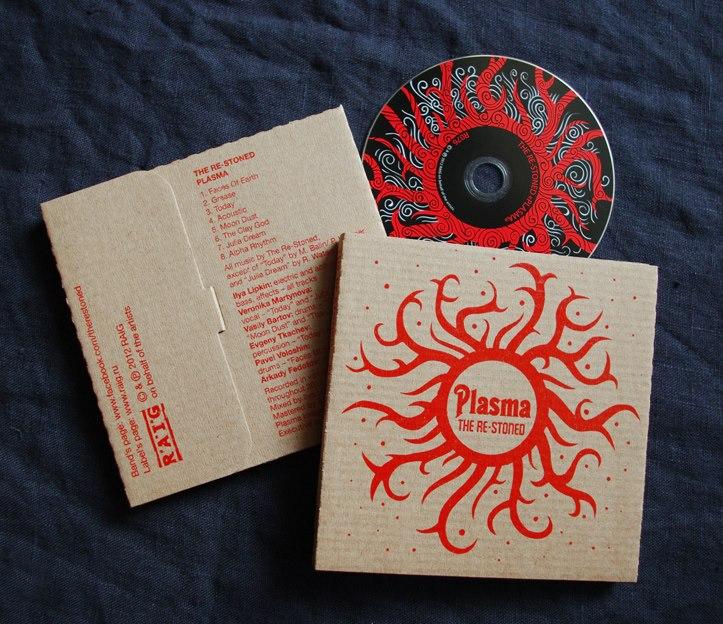 Russian psychedelic and spaced out stoner rockers The Re-Stoned are back with their third album – Plasma. The album opens with the 11 minute Faces Of Earth, starting off with a slow and melodic psychedelic stoner groove and spaced out effects. Then near the 3 minute mark the band launch into a heavy stoned jam, with shimmering psych guitar licks and the space effects sweeping behind like a cosmic wind blowing through. Grease is next and picks up the pace considerably, being a hot and heavy stoner rock ‘n roll tune. It’s got a 70s hard rock feel, but adds a contemporary stoner edge, a combination I like a lot. And they kick it up a notch by embellishing the music with rapid fire alien synth effects. A monster rockin’ tune! The appropriately titled Acoustic takes The Re-Stoned into a very interesting different direction. It begins as an acoustic guitar and simple percussion combo, then adds trippy keyboards and effects, aided by Arkady Fedotov from Vespero on synths. I love the combination of acoustic music and spaced out effects, making this is pleasantly floating experience. But this is just a side trip as The Re-Stoned follow Acoustic with the heavy tripped out psychedelic rocking Moon Dust, another kick-ass rocker with ripping liquid psych guitar licks against a stoned rocking groove. But the band ease up after a few minutes, transitioning to a cosmic soundscape exploration that carries the song to the end. The Clay God is next and has a more classic stoner rock feel, but at the same time not being sludgy, having that mixture of modern stoner and 70s hard rock that I think these guys do so well. And sure enough, after a couple minutes the band launch into a hard rocking segment that includes the trademark Re-Stoned synth enhancements which give it all a spaced out edge. Lots happening on this space, psych, stoner, hard rock trip! The album closes with Alpha Rhythm, the longest track of the set at over 11 minutes. It begins with slowly soloing melodic guitars and synth effects, and just gradually develops from there. This track is all about mood and atmosphere and there’s a subtle freakiness to it all that keeps things interesting throughout.

BUT… that’s not all. The usually all instrumental Re-Stoned include two cover songs, pulling in singer Veronika Martynova to handle the vocals. These guys surprised me when they cropped up on the recently released Fruits de Mer Records compilation of contemporary bands covering songs by the 60s band The Hollies and did a damn fine job of covering that band’s Then The Heartaches Begin and really making it their own. And they do the same with Jefferson Airplane’s Today, taking the Airplane’s 3 minute song and stretching it out to 7 minutes. The band do a good job of retaining the spirit of the original, while taking it into the expected stoned and spaced out direction. Jefferson Airplane never sounded like this before. The other cover is Pink Floyd’s Julia Dream. This is, at the core, very similar to the original, but the liquid psych guitars and flittering synth effects really take the music elsewhere. Very cool.

I must say this is hands down the best Re-Stoned album yet. These guys are really growing and progressing nicely. I’m especially impressed with the variety of music as the band explore acoustic and atmospheric realms and even include creatively interpreted covers.

Note that the R.A.I.G. label (Russian Association of Independent Genres) released the CD version and Nasoni Records released the vinyl LP, and that the LP edition consists of 6 tracks instead of 8, having excluded the songs Grease and Acoustic. Note also that LP edition has different art than the CD image shown.