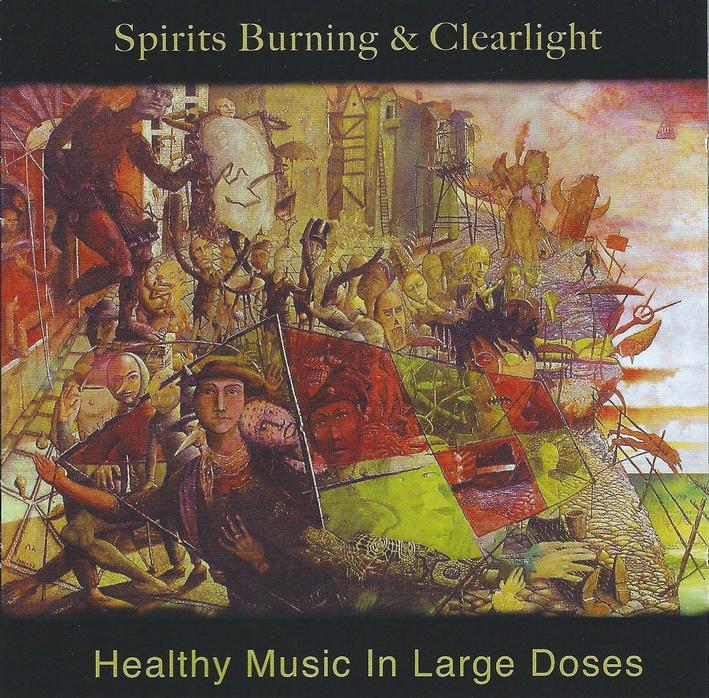 Well, this is an unexpected turn of events, even for someone like Don Falcone, who has built a whole career out of unlikely collaborations. Falcone first appeared on the mid-1990’s U.S. spacerock scene playing keyboards with Melting Euphoria on 1994’s Through The Strands Of Times, before moving on to a variety of projects, including Spaceship Eyes and Spirits Burning, who existed concurrently for a time in the late 1990’s. The first official Spirits Burning album was 1999’s New Worlds By Design, with subsequent releases including the co-credited Bridget Wishart projects Earth Born (2008) and Bloodlines (2009), and 2008’s Michael Moorcock archive-trawl Alien Injection. With their most recent album being 2011’s Behold The Action Man, a collaboration with sometime Hawkwind lyricist Roger Neville-Neil, Falcone must surely be one of the most well-connected pan-generational figures in spacerock, with work blending and crossing a multitude of styles. Clearlight, on the other hand is the vintage 1970’s symphonic progressive rock project of Frenchman Cyrille Verdeaux, a truly gifted keyboard player, around whom congregated an ever-changing array of guest stars (including members of Gong), to release a run of mainly instrumental albums, starting with 1975’s Clearlight Symphony. Verdeaux has continued to use the Clearlight name throughout the ’80’s and ’90’s, while also recording under his own name, to the extent that band and keyboard player have become virtually interchangable. The tragic death of his young son resulted in Verdeaux travelling to India, where he studied yoga and meditation, which strongly influenced his subsequent work on albums such as Ethnicolours, Messenger Of The Sun, Journey To Tantraland, and his most recent release, 2007’s Shamballa – A Journey To The Crystal World.

So much for the back-story. As can be expected then, Healthy Music In Large Doses is an eclectic album, which spans a number of genres. One thing to make clear at the onset is that, despite input from several one-time Hawkwind members, and Falcone’s own space-rocking past, this is definitely not a full-on spacerock experience. Rather, the music on this mainly-instrumental album is rooted in jazz, folk, psychedelic pop and even reggae. The album opens with Treasures At The Dawn Of The Century, a kind of world music piece featuring multiple synths, organ, flute and tabla. Raised On Coal And Oil, strongly features the violin of Stella Fergusson, who appears able to reach notes of such height that only dogs can hear them, interweaving with Verdeaux’s gentle piano arpeggios across seven minutes of floating and bass-driven jazz. Our Secret Cloud is a gentle, almost spiritual, piece which opens with chanted male/female vocals, moving into purely ambient territory, including what appears to be backward guitar, and closing with a reprised choral passage. Verdeaux provides spoken-word vocals – in French – over tenor and soprano sax-flavoured jazz on Infinite City, while Falcone’s percussion duties include marimba, sound eggs, finger cymbals, U.S. kitchen bell and Italian rattlesnake! Unusual percussion aside, this is truly prog rock at its most jazzy, bringing to mind latter day Soft Machine, or Bill Bruford’s Earthworks. Cyndee Lee Rule’s violin weaves its way through the Indian sitars and woodwinds of Hand Signals & Daily Horoscopes, which contains a piano passage strongly evoking the original Clearlight Symphony. The standard of musicianship here is just jaw-dropping, while never being showy. Cool Can Of Cola On The Forehead (one of the few tracks on which Cyrille Verdeaux does not play) is funky reggae, perfectly evoking the image suggested by the title. Healing Power Of Magnets sounds so close to Pink Floyd’s classic Breathe that it is a wonder Gilmour and Waters are not given a co-writing credit; the music suggesting the same feeling of melting euphoria as Dark Side Floyd (and for which Falcone named his first band). Verdeaux again steps back on the dreamy synth-led Travellin [sic] Sideways, while Falcone gets a credit for providing ocean and wind; additional synths are provided by Paul Hayles, who was briefly a Hawk and Sonic Assassin. Kingdom Of Music is another perfectly titled track, with fluttering arpeggios dancing on the wind. Michael Clare supplies dazzeling bass playing on the jazzy In Search Of Friends On The Day Of Masks, with gliss guitars by Gong associate Fabio Golfetti, who provides more of the same on the brief shimmering sound picture that is Italian Lake. The Road To Shave Ice is as baffling as its title would suggest, with Thom Evans (of Hawk associates Melodic Energy Commission) credited with “playing” wrench, umbrella and jaw harps, and Falcone contributing samples of ocean waves, Luau rhythms and chants, and gift shop instruments. Reggae-flavouring is sprinkled on album closer Bring It Down, written and sung by Gong’s Daevid Allen, and certainly sounding like it, with eco-warning lyrics – “Telecommunication sits in castles made of sand” – contrasting with the jolly melodies and tenor saxes of Purjah.

Healthy Music In Large Doses does pretty much what it says on the tin, and sounds much like you would expect from a collaboration of minds that released Found In Nature and Clearlight Symphony. Spacerock it most certainly isn’t, but seekers of a gentle yet funky uplifting panacea will find much to enjoy here, and in most generous doses too!