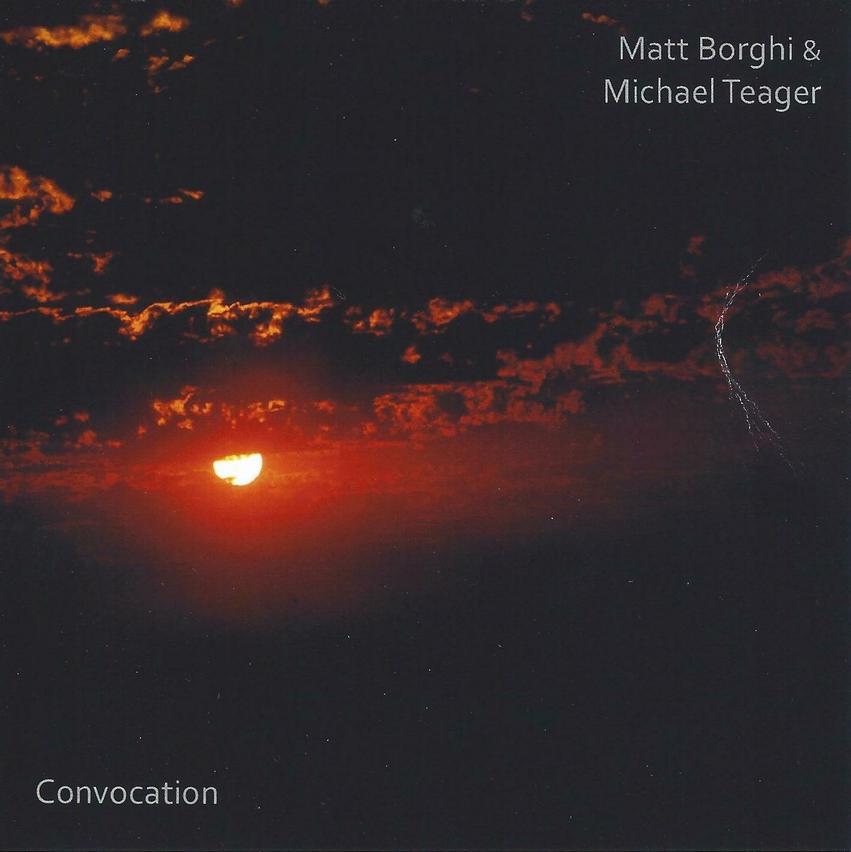 Recorded as a series of improvisational structures in the Spring of 2012, this is the first recording that Matt Borghi and Michael Teager have done after a half-decade of working together. With a background in classical and jazz saxophone, Teager brings a wide palette of influences to the music. Listeners will hear aspects of Jan Garbarek, John Coltrane and Dave Liebman that’s juxtaposed over Borghi’s pastoral guitar sounds that have more of their timbral origins in the work of Claude Debussy or Ralph Vaughan-Williams than they do other contemporary ambient guitarists… so the press sheet says and now onto the review.

CONVOCATION: Majestic and soaring improvisation. The combination of Borghi’s ambient guitar composition with Teager’s classical jazz saxophone is very relaxing and transcendental without being generic or new agey! PRECIPICE: This track is a bit more engaging and varied with pleasant saxophone flourishes. There’s a lot of music on YouTube that is meant to induce sleep and this music is similar but more “music as art” and less “music as sleep therapy”. I don’t know if these guys play out live but if they do they probably thrill their audiences. NEBULA DIVIDE: Magically fabulous and soothing. I’ve never been a fan of the saxophone but Michael Teager places it very tastefully within the music and not over it!! The faint sound of water burbling in the background. CONSTANT APEX: More of the same, the sax is a bit louder, the music more lilting or obtuse than the previous track. It’s probably cliche or very obvious to say this would be good movie soundtrack music but… I can’t hear anything that sounds like guitar but I guess everything that’s not sax is Matt Borghi, which is a meditative tinkling drone. The track builds momentum and gets more and more powerful. DISCERN DESCENT: Moody, ethereal and mysterious. All of these tracks were recorded the same day and you can tell it’s the same instruments and sounds just seperated into different moods. I’m sure it would be very powerful and intense to see/hear these guys play live in a small intimate setting. Nice long piece like I like them…