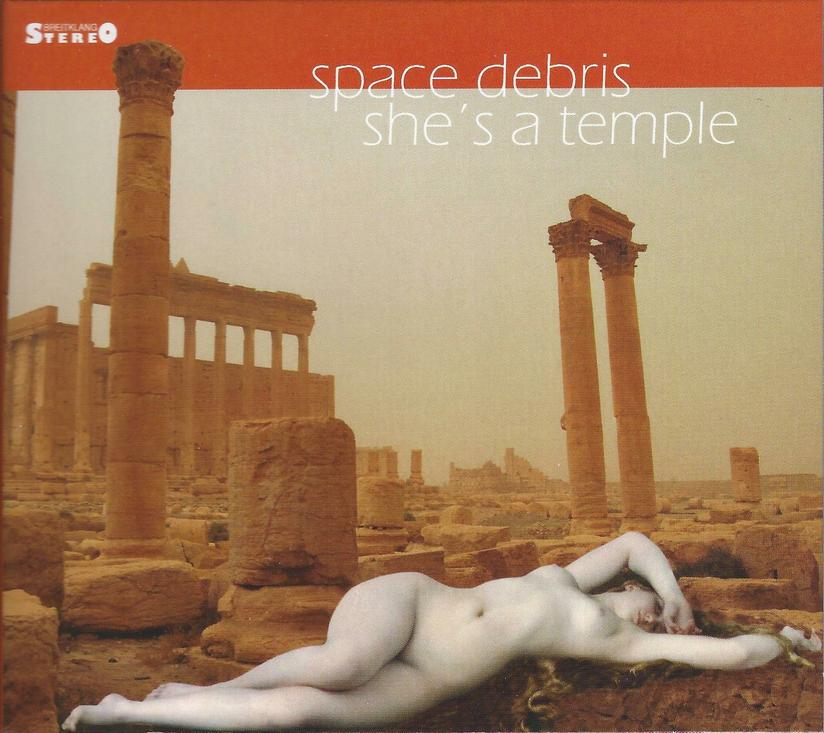 German improvisational ensemble Space Debris return with their 10th album – She’s A Temple, which consists of 8 instrumental tracks and a full 77 minutes of music. The band are the quartet of Tommy Gorny on guitar, Mitja Besen on bass, Winnie Rimbach-Sator on keyboards, and Christian Jäger on drums & percussion.

Space Debris are proudly retro in their approach, mining late 60s – early 70s Progressive, Hard Rock and Krautrock as their inspiration. The album opens with the 15 minute Palmyra, parts of which bring to mind the Jimi Hendrix Experience with the addition of swirling Hammond organ. One of the things I’ve always liked about Space Debris is the way they exemplify Prog infused Hard Rock, with free-wheeling, exploratory jams that transition through multiple musical themes, and Palmyra seamlessly shifts from heavy rocking to gently introspective. Cloudwalker lays down a cool Bluesy foundation for Tommy Gorny’s ripping guitar, which is both spaced out and stoned rocking, as well as Winnie Rimbach-Sator’s electric piano, which traverses Blues and Jazz, and even gets into some tripped out Sun Ra styled efx. This track speaks volumes in less than 5 minutes.

Creation is a 2-part, 18 minute piece. Glimpse Of A Dying Sun is the first part, consisting of spacey soundscape guitar and keys, and subtly intricate drumming. Each musician seems to be operating in his own individual yet communal space, creating a delightfully upbeat Prog-Jazz-Ambient journey. This melts into the second part – Everdrifting Particle, which starts off as anthem fueled heavy rocking Prog, and then veers into wildly swingin’ and groovin’ Soul. KILLER keyboards on this one, and the keyboard-guitar duel at the end makes for a monstrous finale. Skinflight is a brief piece that puts Christian Jäger’s drums front and center. Time Traveller starts off as a shit kickin’ hard riff rocker, with lots of great solos and melodic hooks. After a few minutes the mood calms and we’re treated to some of the most freaked out keyboard sounds of the set, which sounds really cool along with the ambient-Hendrix styled guitar. She’s A Temple starts off with an intriguing blend of Prog-Jazz and King Crimson Red-styled heaviness. The band soon transition to a Funky jam with spaced out guitar leads, before launching into a high intensity heavy rocking Metallic assault that makes for yet another ass kicking finale. The set winds down with the nearly 17 minute Supernova 1604, named after the supernova observed by Johannes Kepler. This sucker jams along nicely, hitting highs of heaviness, meditative yet hard rocking passages, and funky psychedelic segments.

In summary, while Space Debris may be in their usual stylistic territory on She’s A Temple, there is a huge amount of variety, the musicianship is top notch and the performances sweetly inspired.