Space Mirrors – “The Other Gods” (Review and Interview with Alisa Coral) 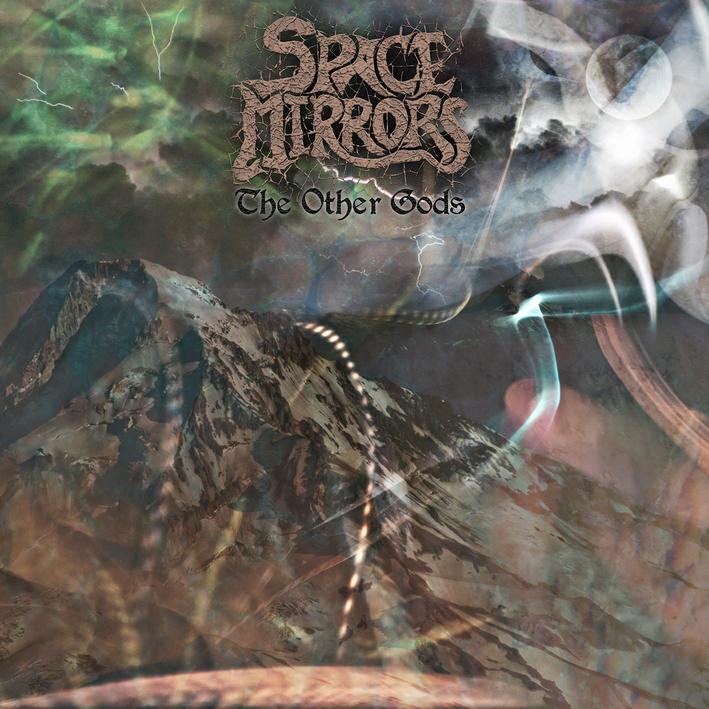 Alisa Coral returns with a new Space Mirrors album, once again blurring the lines between Space Rock, Metal and Progressive Rock. The Other Gods is the follow-up to last year’s In Darkness They Whisper, and is the second installment in the Cosmic Horror trilogy inspired by H.P. Lovecraft’s stories.

The set opens with the power rocking Stranger In The Mirror, kicking off with Goth flavored keys and then transitioning to more spaced out Prog styled keys. Claudio Tirincanti’s drumming is relentless on this song. After a spacey intro, The Nameless City launches into a potent but steady paced Prog-Metal dirge, with a really cool combination of lead and rhythm guitars. Martyr Lucifer’s ominous spoken-sung vocal style is uniquely captivating, on the surface sounding somewhat monotone, yet communicating hypnotic passion, like he’s some kind of singing narrator. She-Devil picks up the pace again, being a steady rocking blend of Metal, Goth and Prog. I like the melodic deep space instrumental mid-section, and we’re treated to some tasty guitar leads from Sparky Simmons. Frozen City Of Cubes and Cones alternates between Prog-Metal and dreamy spacey acoustic sections, constantly transitioning through multiple musical themes, as well as rough and tumble rhythmic paces and patterns. Cyndee Lee Rule is credited with violin string section, which adds a gentle counterpoint to this otherwise heavy rocking song. Nik Turner cranks out a couple wailing sax solos which sound great alongside the whooshing space synths, all underscored by a driving metallic foundation. (The Case Of) Red Hook consists of Prog-Metal with crunchy guitars and atmospheric keys, transitioning between multiple heavy handed and lighter moods. I love the finale, with efx’d spoken word from Alisa accompanied by flittering space electronics. Strange High House eases the pace, being a lighter yet still metallic rocker, with dreamy keys and melodic flute from Nik, plus more rocking sax later in the song.

At over 10 minutes, Times Unknown is the longest track of the set. It opens with a beautiful piano, guitar solo and space synth intro, before launching into a continually evolving Prog-Metal-Goth-Space rocking song. The segments with piano, flute, spacey synths, and searing yet melodic guitar leads are spellbinding, like a Space-Metal-Orchestral take on classic Progressive Rock. This is THE tour-de-force of the album! The Other Gods is a Goth infused Space-Prog tune with alien synths that sound like an invading horde of robot beetles. I like the off-kilter rhythms that flow seamlessly while providing an appealing sense of imbalance. And Doom of Sarnath closes the set on a high intensity note, being a fist pumping slab of rocking Space-Metal. A monster finale, and my favorite of the set along with Times Unknown.

So another solid effort from Space Mirrors, who are combining musicals styles in ways that I’m not aware of anyone else doing. Always fascinated by Alisa’s work, I asked her the following questions via email:

Aural Innovations (AI): Let’s talk about the theme of the album. Your last album – In Darkness They Whisper – was the first in a planned “Cosmic Horror” trilogy inspired by H.P. Lovecraft’s stories. Tell me how The Other Gods fits in thematically relative to the last album.

Alisa Coral (AC): The Other Gods is the second in the “Cosmic Horror” trilogy. It continues the concept of songs based on H.P. Lovecraft stories. Some songs have the same title as the story, like The Nameless City and Doom of Sarnath, some not so you have to guess which story it is.

AI: The Other Gods is being released just one year after In Darkness They Whisper, which I think might be the quickest follow up to an album you’ve produced yet. How did you manage it? Will part 3 of the trilogy follow as quickly?

AC: I was writing, composing and recording new songs for about 3 years in a row. So when the In Darkness They Whisper album was released I had already recorded most of the demos for the The Other Gods. There was no break, constant inspiration. Now I think I need a break and some time before I start working on part three. I have ideas but I didn’t record anything yet. And we need to replenish the financial resources too – you know, the studios are not cheap! I don’t think the third part will be released in 2014.

AI: Though there are guests on various tracks, you’ve got a solid lineup of musicians throughout the album, something I don’t think you’ve really had before. Was it just a matter of good fortune finding people willing to make the commitment?

AC: Yes, this is something I’m very proud of. There were more musicians lined up for this album but some of them couldn’t record. So we (me and Martyr) didn’t want to wait and decided that we really wanted a solid line-up. It all started after we recruited Claudio Tirincanti to play the drums. He is very well known for playing with Blaze Bayley (ex-Iron Maiden) and now he plays with Tim “Ripper” Owens (ex-Judas Priest, ex-Iced Earth). He is the drummer I was looking for and it was immediately decided that he should play on all the songs. So all the drums and percussion you hear is Claudio. No triggers, no programming. Then there was Gabriel Monticello, a professional upright/bass player who is also a member of American Space Rock band Spaceseed. I recorded for their new album and got to know Gabriel really well. I asked him to record bass on several songs, than it was a couple more and in the end the whole album. So we got the same musicians playing bass and drums which gave the solid basis. Now it was time for guitars and Sparky Simmons already joined Space Mirrors as a new permanent guitarist. He recorded on just one song on the In Darkness They Whisper album but got 8 out 9 songs on the new one! I promised one song to Italian guitarist Fabio Bartolini so he recorded for the opening track. But me, Martyr Lucifer (a member since 2007!), Sparky Simmons, Gabriel Monticello and Claudio Tirincanti are the actual Space Mirrors band now. And I hope this line-up will record on the albums to come! We also have such regular guests as Nik Turner and Cyndee Lee Rule. I should say special thanks to Nik for delivering great recordings right on schedule while he was busy on his winter US tour. You can always rely on Nik. Maybe James Hodkinson will agree to add his mellotron and minimoog again on the next albums too. We really like his solos on the song Stranger in the Mirror. So I tend more to having a regular line-up of guest musicians too.

AI: I continue to be fascinated by your unique blend of Progressive Rock, Metal and Space Rock. The Other Gods has some of the most overtly “Prog” sounding music I’ve heard from Space Mirrors yet. Was this intentional or just the way the music found itself? Times Unknown best exemplifies this and is one of my favorite Space Mirrors tracks to date. There’s so much happening in it.

AC: Oh, yes, Times Unknown is my favourite track. It was the first song I composed for this album. I’m not sure how “Prog” it is. These days everything is called “Prog”. So I don’t pay much attention what genre or style it should be. I just compose the music and the lyrics. Follow the concept which inspires me. And that’s it. So it’s never intentional. If you say we have more prog on this album – so be it! I trust you in your definitions.

AI: I never think to ask artists this question, but tell me about the thought and planning that goes into the order of the songs. I love the flow on the album, and Doom of Sarnath ends it all on such an intense note that I was sitting and waiting… waiting for more. A really solid finale.

AC: Thank you. I tried several combinations of the order as I always do to keep the right flow but Doom of Sarnath was always going to be the last one. Can you believe that I almost threw this song in the trash bin? Then I decided it should be completely re-recorded to Claudio’s drums. Gabriel re-wrote the bassline and Sparky did new guitars. And then it was something different, something I really liked. I thought it would be an excellent finale for the album. And when Martyr sent me the demo of the song Stranger In The Mirror (music for which he wrote) I immediately knew it would be the opening track. So I had to determine the order of the songs between those two.

AI: You’ve got two albums now on Transubstans. Have you experienced better distribution for Space Mirrors? Will part 3 of the trilogy also be on Transubstans?

AC: Yes, much better distribution and promotion. I really like how Transubstans works. As about third part of the trilogy we will have to wait and see. Naturally I would like it to be released on Transubstans as two other parts are there too. And how about releasing all three parts as a vinyl box-set then? Something we need to talk about with our record label.

AI: Any other projects in the works? Anything going on with Psi Corps?

AC: I have some sound producer’s work. For example, I will master the new Spaceseed album which is being mixed now by Gabriel. But I don’t have any other of my own projects going on. Only Space Mirrors. About Psi Corps, I don’t know. I think this project is closed. But never say never…