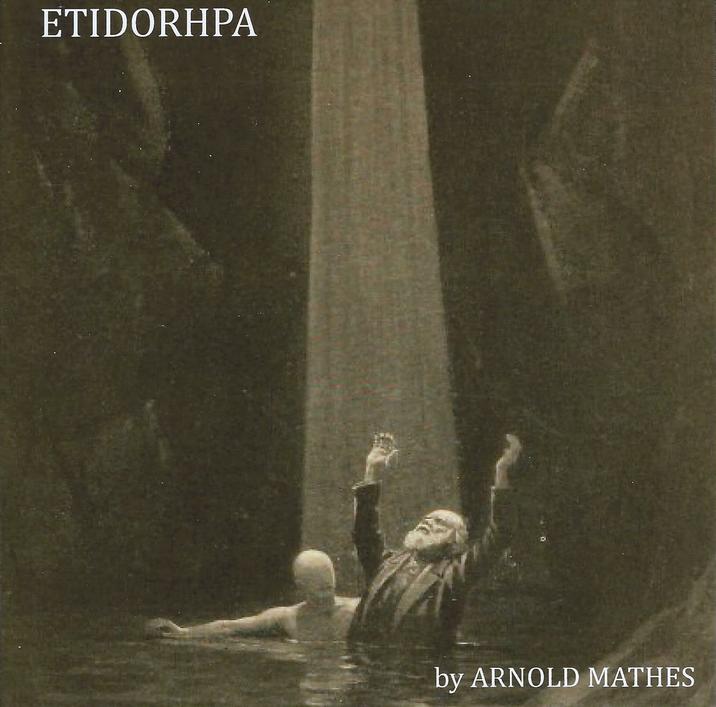 This is the first new set of music I’ve heard from Brooklyn, New York based electronic musician Arnold Mathes in nearly a decade. Etidorhpa (spell it backwards) is based on the 1895 book of the same name written by John Uri Lloyd, a pharmacognocist and pharmaceutical manufacturer from Cincinnati, Ohio. I’ll quote the summary at Wikipedia:

The book purports to be a manuscript dictated by a strange being named I-Am-The-Man to a man named Llewyllyn Drury. Drury’s adventure culminates in a trek through a cave in Kentucky into the core of the earth. Ideas presented in Etidorhpa include practical alchemy, secret Masonic orders, the Hollow Earth theory and the concept of transcending the physical realm.

Pretty interesting stuff for 1895. The album consists of 6 tracks at 57 minutes. A Zone Of Light opens the set, featuring classic floating, exploratory electronic space. But after a 3+ minute buildup, Mathes kicks in the rhythms and we’re in cool grooving, deep space mode, with a nifty combination of head boppin’ beats and meditative space. It’s like a mixture of Phaedra/Rubycon Tangerine Dream and more overtly beat and melody driven Kraftwerk. Vitalized Darkness is next and starts off as a darkly moody sound and atmosphere exploration, with lots of soaring synth lines and colorful bleepy blurby electronics. About halfway through a slowly developing space symphony begins, and I like the combination of robotic marching rhythms, angelic ghostly chants, and drones. Near the end it all gets nicely freaky, with a wild mish-mash of electronics that get increasingly frenzied until it transitions smoothly into The Fungus Forest. I like the multi-layered, playful alien electronics and rhythms alongside space-prog styled keys on this track, including a mellotron-ish orchestral melody, and Mathes finishes on a spaced out avant-garde note. The Fathomless Abyss begins with a variety of sounds and ambience, before introducing a syncopated rhythmic pulse that gets the slow but steady groove going. Mathes does a great job of keeping the beat while maintaining a sense of hypnotic drift, but never allows the listener to get snoozy as the parade of ancillary sounds and effects adds to the mood and character of the piece, as well as being powerful theme developing tools. Hearing Without Ears is pure deep space bliss that will make you feel like you’re drifting through the cosmos, strapped to your favorite lounge chair. And The Last Farewell is a brief, peaceful finale to the set.

In summary, if you like classic 70s space electronica along the lines of Tangerine Dream and Klaus Schulze, but also with elements of cosmic Progressive Rock, then Etidorhpa is for you. Mathes does an excellent job of maintaining a compelling thematic flow, making for a powerfully image inducing set of music that must be heard from beginning to end.

Arnold Mathes doesn’t currently have a web site but can be emailed at: amathes.1@netzero.net
The entire text of the Etidorhpa novel can be found online at: http://www.sacred-texts.com/earth/eti/