Sendelica – “The Kaleidoscopic Kat and Its Autoscopic Ego” (self-released 2013, CD/DVD/LP/Digital) 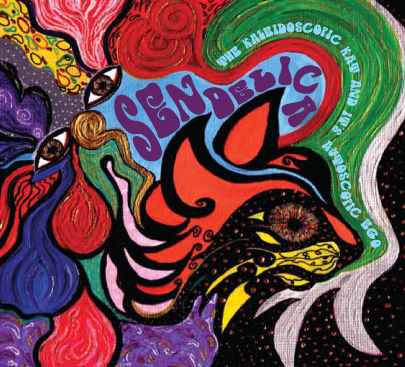 After being super blown away by Streamedelica She Sighed as She Hit Rewind on the Dream Mangler Remote (which I reviewed back in Aural Innovations #41 (October 2010), I was eager for more of this Welsh instrumental psych/spacerock band. The Pavilion of Magic and the Trials of the Seven Surviving Elohim (2011) unfortunately failed to make the same impression on me as Streamedelica did, but The Satori in Elegance of the Majestic Stonegazer (2012) was a terrific album of psych rock that definitely put the band back on the map for me. And now we get to their latest, The Kaleidoscopic Kat and Its Autoscopic Ego. This is the first album they’ve released on which they don’t have a regular drummer in the band, and in fact, there are live drums credited to only two of the tracks on the album. But this time out, Sendelica has absorbed a cool electronica vibe into their sound. It works very well, better than most experiments of this sort, precisely because amidst the programmed drums and pulsing synths, Sendelica never forget that they are still a psychedelic rock band.

The titularly truncated title track, The Kaleidoscopic Kat, is stylistically all over the place, but the band pulls it all together in quite a nifty way. It starts out with a slow and droney guitar, weaving a gentle melody. Piano and synths soon join as the piece evolves into a dreamy, psychedelic ballad of sorts as distorted guitar noise slips in underneath, building to a Phil Collins In the Air Tonight type drum explosion. The piece becomes a jaunty acid tinged ride from there, buoyed by a funky, 80’s style synth bass riff. It totally sets the tone for the eclectic album to come. Tinsel Tears, for example, combines a jazzy baseline with a killer, over the top classic rock guitar riff whereas Something in a Grain of Sand ushers in that electronica vibe I mentioned, in its use of ambient and rhythmic elements of that genre, combined, of course, with the lysergic guitar sounds that the band is well known for. It Happened One Sunday Afternoon in Wales is a long, slowly building 11+ minute piece reminiscent of Screaming and Streaming into the Starlit Night from Streamedelica. The soft guitar, sound effects and sax here take on an easygoing, mellow morning atmosphere (as suggested by the title) rather than a late night jazz club sound. That’s of course before it builds into a mid-tempo, heavy spacerock outing in its latter half. The sax definitely lends a nice jazzy feel to the proceedings throughout, but I kind of wish the guy playing it would perhaps occasionally step outside of melodic Dick Parry-esque soloing and maybe put a little squonk or torture into his playing, a la Nik Turner, for example (who guests on a later track on the album, but playing flute). On the other hand, it does set a nice counterpoint to the wild chaos going on around it. Set the Controls for the Heart of the Buddha brings back the electronica sensibility, with a drum machine style rhythm leading into a dark and languid odyssey utilizing a riff from the similarly titled Pink Floyd number, but building an entirely different song around it. Clever Meat is 6 1/2 minutes of pure spacerock, replete with catchy guitar riffs, bubbling synths and powerful drum rhythms. It’s a knockout track, and one of the best on the album! 21st Century Autoscopic Ego Man (these guys are starting to sound like Acid Mothers Temple in their plays on classic song titles!), starts out as a surprisingly bluesy rocker, but after a few minutes, it turns into a dark and weird space voyage. There’s no surprise, of course, that It’s the Neu! Kosmiche Disko has a strong Krautrock influence. For me, it’s the standout piece on an already excellent album, and represents Sendelica’s will to grow and keep exploring new sounds with each album. It’s a bit like Kraftwerk meets Can, as it twists and turns through funky, pulsating electronics, motorik rhythms, swirling sax, brooding, ambient guitars and oodles of effects on everything. After that epic 14-minutes of krautrocky goodness, the album ends quietly, with a reprise of The Kaleidoscopic Kat, this time without drums, but including some beautiful, spacey flute courtesy of the aforementioned Mr. Turner.

The Kaleidoscopic Kat and Its Autoscopic Ego has a really nice balance to it. Not just in its similarly themed bookends, but in the way the whole album is put together, the way the early, middle and later electronica influenced tracks are surrounded by tracks in the heavier, psychedelic rock vein of Sendelica’s earlier works. But every piece is distinctive, each adding its own ingredients to the mind bubbling soup that makes up the entire album. And it’s a tasty soup, indeed! Another great release from this band!