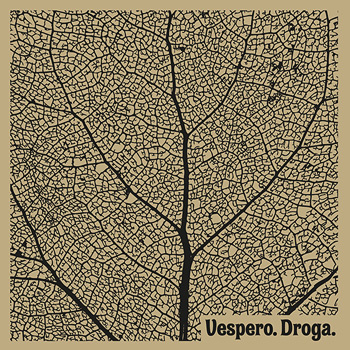 Vespero are on a creative tear. I described last year’s Subkraut: U-Boats Willkommen Hier as a cross between Korai Orom and Ozric Tentacles, and at one point made a reference to a classic Prog sound. Their new album, Droga, draws much more heavily on the Progressive Rock influences, planting it all in the band’s trademark Space Rock grounding.

The album opens with Steppe. A Middle Eastern flavored intro conjures up images of a desert oasis in space, with screeching yet seductively melodic violin, a steady drone and flittering electronics. Around the 4 minute mark the band launch into a blistering Space-Prog rocker that brought to mind a marriage of King Crimson and The Spacious Mind. The rapid-fire and angular Maul includes Robert Fripp styled guitar patterns, melodic violin, and classic Prog keys, nicely elevated into space by the darting alien synths. It’s like each musician is playing lead and it all gels wonderfully. Red Pitfalls consists of soaring gliss guitar, bubbling liquid psych guitar, monster rocking leads and more King Crimson references. There’s lots of variety, all congealing into a lusciously rocking whole. In the last few minutes the music transitions to a blissfully dreamy cross between Shoegaze and spaced out Jazz. Thymus is similar, rocking out like a Hell-brewed firestorm, and then shifting to an intriguingly dissonant yet pleasantly melodic segment. We’re treated to lots of seamless thematic shifts and a mercury bursting intensity level that keeps the action zipping along. Oboo goes in a different direction, with funky, tribal, rhythmic floating Space-Jazz, grooving electronica and mind-melting Rock. I love the King Crimson inspired guitar patterns accompanied by wailing guitar leads and pulsating electronics. I also dig the high powered intensity and whimsical meandering explorations of Halo. Marine benefits from the addition of acoustic instruments, plus a killer combination of percussion, guitar and keys. The first half of Frozen Lillies (Melt in Heaven) is like a deep space take on the early Genesis sound, and for the second half Vespero switch to frenetic drumming, tempered by cosmic keys and intensely rocking yet lulling guitar leads. The title track is an electronic and soundscape driven mood piece, with haunting scat-chants from Elena Belozyorfova, Steve Hackett in space guitar, and astral sax, making for a mind-bending finale to an outstanding set.

Droga has got to be the most compositionally sophisticated set of music I’ve heard from Vespero yet, and the musicians have the chops to execute it. Imagine a cross between King Crimson, Djam Karet, Ozric Tentacles, and early Genesis, and you might get something like Droga. Vespero continue to be one of the most exciting, interesting and compelling instrumental bands on the contemporary Space Rock scene. Highest recommendation.

Note that the CD comes housed in a thick cardboard folder with silkprinted artwork. There is also a limited edition 2-CD set that includes the Liventures bonus disc, featuring alternative versions of the band’s live favorites, cover songs, and compilation exclusives.

For more information visit the R.A.I.G web site at: http://www.raig.ru
Streams and downloads of all R.A.I.G. releases are available at their Bandcamp site: http://raig.bandcamp.com
Visit Vespero on Facebook at: https://www.facebook.com/Vesperomusic