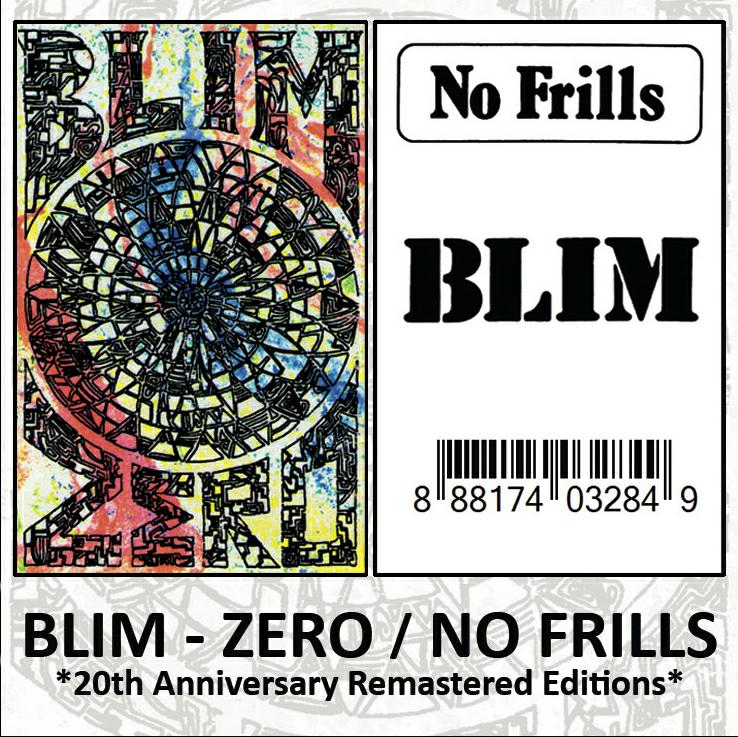 BLIM were a UK based band who released two cassette albums in 1992 and 1993, which have been reissued as a 20th anniversary re-mastered 30 track 2-CD set (includes 7 bonus tracks not on the original cassettes). Formed by the core of Andy Read, Tony Child, and Neil Spragg, BLIM played an eclectic blend of Space Rock, Prog, Jazz, Psych, Ska, Punk, and miscellaneous you-name-its. A huge number of bands emerged from the 1980s so-called festie psych scene in the UK, but like The Great Imperial Yo-Yo, Krom Lek, and Omnia Opera (of which Spragg was/is a member), BLIM were crack musicians playing mind-boggling rock that could be simultaneously intense and fun.

The first album, Zero, features the 6-piece lineup of Read on guitar/vocals, Child on keyboards/FX/samples, Spragg on drums/vocals, plus Ben ‘BJ’ Garniner on bass, Phil Cook on sax/vocals, and Nigel Pugh on flute/keyboards. Among the highlights is Derangement, a space-prog instrumental that starts off rocking with Hawkwind alien synths, flowing classic prog keyboards, swingin’ sax, and the spirit of Gong looming, but then shifts to a higher intensity space rocker with an almost metallic crunch to the guitars, before changing gears once again to a dreamy, flute driven melodic segment, and then steamrolls over the listener for the finale. F features turn-on-a-dime transitions between cool grooving lounge-jazz in space and Omnia Opera styled guitar intensity, plus the tripped out whimsy that I recall from The Great Imperial Yo-Yo, as well as another mind-massage flute led bit. Yeah, these guys are all over the place, but space rockers who are also progheads will love the compositional gymnastics and now ya see it, now ya don’t arrangements. Synchromesh is a similarly varied spaced out power-prog instrumental that includes a guest synth solo from Omnia Opera’s Ade Scholefield (both albums were recorded at Ade’s studio). The guitar on all these tracks is monstrous and I have to say that… move over Ed Wynne… Andy Read is one of the 80s/90s space rock era’s great guitarists. The nearly 12 minute Disappearance starts off quite sedate, with drifting acoustic guitar, flute, sax, and throbbing fretless sounding bass, then shifts to a threateningly moody King Crimson-ish feel, before launching into the BLIM brand of blistering full frontal assault power rock, and then shifts back… you get the idea. The mood lightens with Country & Eastern – I smoke a little ganja, I smoke a little hash, wheeeeeeeeeee!!!

For No Frills, BLIM paired down to the quartet of Read, Child, Spragg, and Robert Illesh on bass/mandolin/keyboards/vocals. The space rock elements are by no means gone, but this album is more about prog infused heavy rock (plus other fun stuff) and tight-as-a-knot performances. Standouts include The Noup, which puts the spotlight on Read and some serious guitar shredding plus a killer bass sound from Illesh, and includes dead on riffage from Gong’s Master Builder. Junk is a head-spinning space-prog workout with more monster guitar. Sparsely & Much is a schizophrenic, whirling ride, transitioning between jazz-funk-psych-rock, funky Discipline-era King Crimson, and throbbing spacey Reggae/Dub grooves. I love it. Ditto for Vector, which see-saws between a blend of Red-era King Crimson and punk, to hyper-kinetic Ska, and includes spaced out meteor shower electro oscillations. Plop starts off as a cool grooving rocker, which reminds me of the jazzier songs on Snakefinger’s Manual of Errors album, and then launches into a blistering high intensity hard rock/jazz/metal exercise. Wet Potato is a hard rock carnival that will throw your equilibrium completely off. These guys are fucking TIGHT! And Ocean and Beejayone are surprisingly pastoral (for BLIM), the latter dishing out some of the most tastefully rocking guitar licks of the set.

So… wow, what a roller coaster ride. Can’t believe I’d not heard of these guys, though I see now that Neil mentions BLIM in Doug Shaver’s Omnia Opera interview published in Aural Innovations #8 back in ’99. Summarizing “quote” descriptions of these guys are impossible. But what the hell… let’s have some fun… imagine Ozric Tentacles, King Crimson and Frank Zappa at an Allan Holdsworth backyard BBQ, and you might get something like BLIM. You want this. That is all.

For more information you can visit the BLIM web site at: http://www.blimmusic.co.uk
Stream and purchase at: http://blim.bandcamp.com