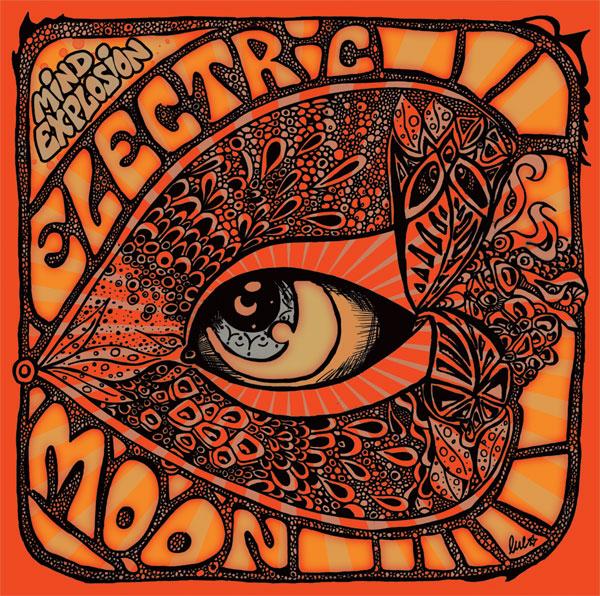 German cosmonauts Electric Moon have been mighty busy. Their latest effort – the appropriately titled Mind Explosion – documents a performance in Austria during the band’s 2013 tour. These folks are 100% about extended jams, and Mind Explosion consists of a tasty quartet of excursions in the 17-22 minute range. Electric Moon are the trio of Sula Bassana on guitar, FX and Casio Orgel, Komet Lulu on bass and FX, and Marcus Schnitzler on drums.

It all starts with Trip To The Moon, which begins like Pink Floyd at their most exploratory, creating a steady rolling groove, over which Sula plays liquid fuzzed, acid searing guitar notes. The mood is doomy and intense and doesn’t take long to build up to Teutonic powerhouse levels of acid-space fervor. Marcus and Lulu are like a rhythmic launch pad, propelling the rocket into space while Sula’s guitar rips off corrosive licks that signal all the obstacles that are broken through on the journey to their lunar destination. A monster stoned, Psychedelic Space Rock expedition. Kaleidoscopeephole is similar, roaring out of the starting gate with a legion of tanks rhythm section. I like how the guitar alternates between playing slow, sustained, cosmically majestic leads and rocking out hard in space. And once we’re beyond the halfway mark the intensity level is gloriously punishing. Stoned, acid drenched improvisational Space Rock at its best. Electric Moon go totally Blanga for The Picture, a sludgy, stoned to the gills Space Rock dirge that’s like the most jamming, hypnotically droning moments from Hawkwind’s Space Ritual. Damn… this one left me bruised and bleeding. So I wasn’t disappointed when the final track, Mind Explosion, was easier on the intensity and even a wee bit whimsical, like some kind of robotic dance party for space cadets. Oh, it does indeed get intense. But the overall vibe is lively and even festive.

In a nutshell… it’s all about the journey friends, however rough and tumble it may be. If you dig extended instrumental Space Rock excursions that just take off and explore, with a focus on mood, image inducing sounds and effects, and brain frying levels of cosmic intensity, Electric Moon are among the best; the progeny of the pioneering greats like Guru Guru and Amon Düül II, readymade for the contemporary stoner generation. The freak flag is flying high.

The album is available in CD (500 copies) and 2-LP (1000 copies) editions, and vinyl junkies should note that the LP is pressed on marbled vinyl and house in a foldout cover with artwork by Komet Lulu.