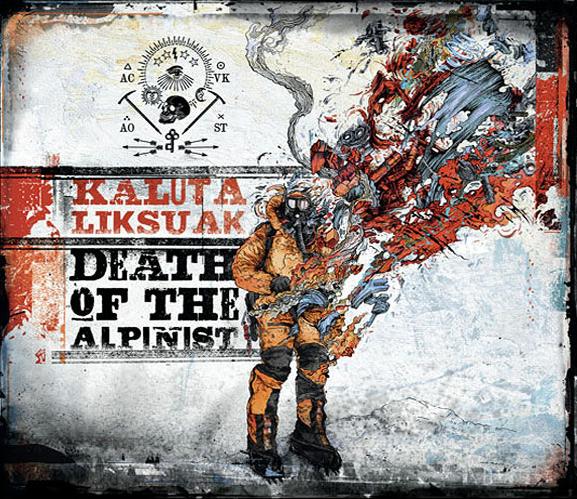 Kalutaliksuak began in 1993 as the Moscow, Russia based duo of Vladimir Konovkin and Alexander Chuvakov, who performed live with various musicians but produced little in the way of quality recordings. The duo disbanded in 1997, with Konovkin going on to study tube-organ at the Moscow Conservatory of Music, and performing with Rick Wakeman at a 2001 concert in Saint-Petersburg. Chuvakov graduated from the Russian Academy of Fine Arts and went on to become a professional painter and book illustrator. In 2006 the duo regrouped as Kalutaliksuak and at this time are the quartet of Konovkin on keyboards and synths, Chuvakov on guitars, flutes, percussion and voices, Alexei Ohontsev on bass, and Sergei Titovetz on drums and percussion. Their new album is titled Death Of The Alpinist and is a conceptual work based on a story from The Aged Tales, though I’m not quite clear on whether that’s a book by a particular author or a collection of some kind.

The set opens with the 21 minute Hard Climbing, which traverses through various interesting realms. The music is instrumental except for periodic theatrical spoken narratives in what could either be Russian or a made up ranting language. It starts off like a psychedelic blend of 70s Jazz-Fusion a la Herbie Hancock’s Headhunters and early 80s New York “Downtown” Avant-Funk like Material. I love the combination of ripping guitar licks, deep grooving Bill Laswell styled bass, flowing flute melody, and soundscapes. As the music grooves and jams along I’m also reminded of the contemporary Psych-Jazz-Prog of San Francisco band Mushroom. About halfway through we transition to a darkly grooving Acid-Stoner-Funk-Prog-Jazz vibe that I really dig. The overall feel of the piece is loose and jamming, but in a controlled way that is always clear of its direction. Shambhala follows and is a shorter 7 minute nicely flowing melodic rocker that’s just as heavy on the atmospherics as the funky grooves.

At 20 minutes, Buried Horizons is another Kalutaliksuak epic. The first few minutes are loosely trippy and grooving and then go into the cosmos when the spacey keys join in. Around the 5 minute mark the band take off into a steadily rocking Space-Prog theme, with razor sharp guitar licks and spacey effects. But things quickly quiet down with a quiet ambient flute led segment, which slowly but surely starts to speed up again, and as it does I’m reminded of Porcupine Tree’s The Sky Moves Sideways. It’s got that same bass pattern and deep space aura, though there’s also a Psychedelic-Jazz feel, and an intense but heavenly ambience. And our freaky narrator is back! Finally, we have the nearly 10 minute Not a King, which is spacey, tribal, atmospheric, and darkly Psych-Jazz-Fusion rocking with a bit of an ethnic flavor. I love the ambient but rocking guitar solos played against the screaming soundscape keys and bubbling freaky effects.

In summary, I’m really impressed with the way Kalutaliksuak bring together so many styles and influences, because ultimately they are a band that defies description and just have to be heard to get a sense of what they’re about. Highly recommended.

For more information visit the R.A.I.G. web site at: http://www.raig.ru
All R.A.I.G. releases are also available for streaming and download at: https://raig.bandcamp.com