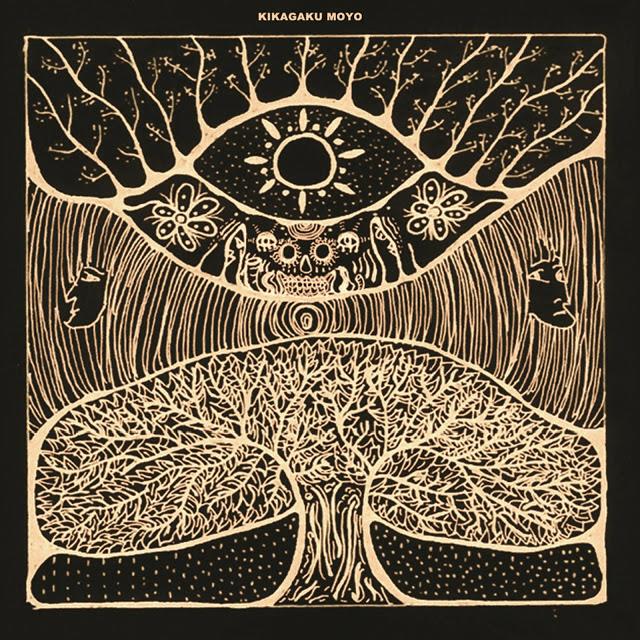 Kikagaku Moyo, which is Japanese for “geometric patterns”, is a Tokyo based quintet who formed in 2012 with the intent of recreating the spirit of the early 70s Japanese Psychedelic underground. Their first self-titled album was released as a download in May 2013, and co-released later in the year on LP by Cosmic Eye and Sound Effect Records in a limited edition of 350 (150 colored and 200 black).

The album opens with the totally trippy and pagan Acid-Folk-Psych Can You Imagine Nothing?. The combination of acoustic and electric guitar and sitar on this tune will make you swoon. Add in the light tribal percussion, high pitched wind melody and female vocals and you’ll be dancing slow motion through a paisley colored forest with the birds chirping, woodland creatures pattering about, angelic maidens, and… ummmm… sorry, got a bit caught up in it. But don’t get too relaxed because the next song – Zo No Senaka – is much heavier, setting down the acoustic guitar for some spaced out Psychedelic Stoner rock ‘n roll. I like how the sitar jams along with the electric guitar, even as the guitar is whacking out searing fuzz lines and acid-wah’d leads, and the alien Theremin zipping about is a nice touch too.

Tree Smoke returns to more mellow territory, with a mesmerizing combination of lovely liquid Psych guitar and flowing sitar leads. Near the halfway mark the pace picks up a bit and the guitars start to rock out harder and we’re treated to some melodic acid leads. I like how we’re spirited back and forth between the harsh stoner blasts and the warm comfort of the trippy hypnotic flow. Lazy Stoned Monk feels like a 5 minute buildup to something that never comes, though I do like the schizophrenic sensation that’s both mellow and tension laden. Finally, Dawn is a cool combination of Folk-Pop-Psych, harsh Acid-Stoner riffage, and cosmic grooving Indian influences, ultimately blasting off into a totally stoned but trippy rocking jam.

In summary, I like the way Kikagaku Moyo bring together mellow Folk-Psych and heavier Stoner-Psych influences into the same songs. The contrast between the meditative and harsher elements is strange, welcome, and it works. I see that they’re touring the US soon but the shows are all to the West. I’ll be keeping my eye on this bunch.

For more information visit the Cosmic Eye Records web site at: http://cosmiceyerecords.blogspot.com
The e-shop is at: http://www.musicbazz.com/products
You can stream and download the album at: http://geometricpatterns.bandcamp.com