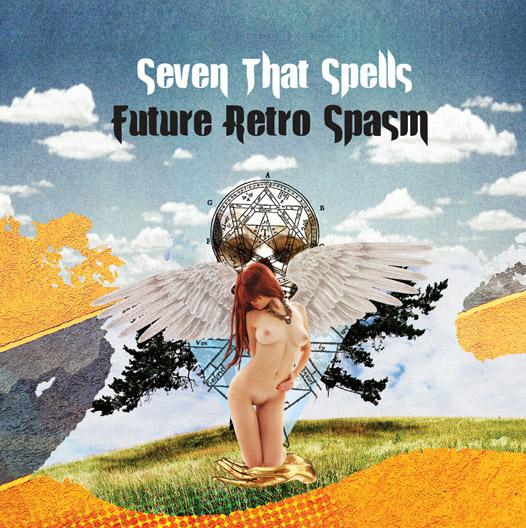 Future Retro Spasm, by the great Croatian band Seven That Spells, was originally released on CD in 2010 by Beta-lactam Ring Records. The Greek label Cosmic Eye has now reissued it on vinyl (with 5 of the 6 original tracks) in a limited edition of 150 color and 150 black. For this outing the band are the quartet of Stanislav Muskinja on drums, Narantxa on bass, Lovro Zlopasa on sax, and, as always, guitarist Niko Potocnjak.

The saxophone takes the lead on Olympos, wailing away as a propulsive rhythm section supports to create a Psychedelic Prog-Thrash dirge. Near the 5 minute mark the bass asserts itself, laying down a wildly syncopated pattern while the sax continues to wail. In the last couple minutes the band maintain their relentless assault, soaring into space for the finale. G (yeah, just the letter) kicks off with a Punk-Funk groove, around which the sax and guitar wail, sail, flutter and fly, and Niko soon steps out to the forefront in Psychedelic freakout mode. This is seriously intense and brings to mind Acid Mothers Temple with sax. Niko has collaborated with Kawabata Makoto in the past and Seven That Spells played shows with Acid Mothers Temple and these two bands really are like two peas in a pod when it comes to multi-styled Prog infused freakouts. Terminus Est continues the ferocious Acid-Punk-Funk-Thrash no quarter offensive.

The 14+ minute The Abandoned World Of Automata goes in a different direction, starting off as the most laid back piece of the set. It’s slowly rockin’ Psychedelic drift, with Niko playing a nicely trippy and only gradually changing melodic guitar pattern. And when the sax joins in, Lovro and Niko are soaring along in tandem to create an easy paced but still high powered dream rocker. Even later when the guitar and sax devolve into lysergic mind-fuck territory there’s still a sense of introspective drift to the proceedings. And the luscious last minutes sound like a swirling Psychedelic marriage of Soft Machine and Van der Graaf Generator. Wrapping up the set is Quetzalcoatl, a 3 minute monster that’s like a coda to everything that came before. Freakin’ awesome…

Much of Future Retro Spasm is a bit different for Seven That Spells, but no less wild and intense than any of their other albums. The guitar and sax are a dangerous combo, and supported by an equally threatening rhythm section, Seven That Spells come in for the kill.