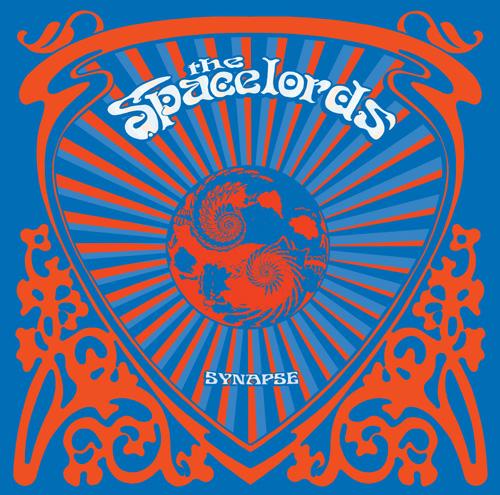 The Spacelords are the German trio of Hazi on guitars and FX, Klaus on bass, synths and FX, and Marcus on drums and voice (Marcus is also the drummer in Electric Moon). I’d not heard the band before but Synapse is their fourth album and consists of 4 tracks and clocks in a just over 40 minutes.

The title track opens the set and in the first moments sounds like it might be a Hawkwind Assault & Battery cover. The music does indeed flow with that kind of vibe. It’s dreamy drifty Space Rock, with melodic guitar, deep space symphonic and soundscape synths, and bits of freaky electronic effects. Later the music transitions to heavier Space-Prog rocking mode that carries us through to the end. Sitarguitar kicks off in a similar style, jamming along in dreamy Hawkwind friendly spaceland. Again I’m reminded of Assault & Battery, specifically the feel of Assault & Battery/Golden Void from Hawkwind’s Palace Springs. At 12 minutes it’s the longest track but pretty much stays in the same groove, though like the last track it gets more chunky rocking in the last minutes. I would have liked to hear more transitions. In fact, I think this music is screaming out for a vocalist.

No 2 opens with a groove that is steadily rocking and has a hypnotic droning quality. I really dig the slowly tripping Dave Gilmour in space guitar leads. After about 6 minutes the music gets heavier, creating a majestic symphonic Space Rock sound that I liked a lot. Finally, we have Pyroclastic Monster. Right out of the chute the rhythm section is rocking while the guitar is spewing soaring acid-space licks. Then after a couple minutes it shifts to a Space-Prog theme that reminded me of Ship of Fools, with a heavenly combination of guitar and synths that’s both heavy rocking and dreamily atmospheric. There’s also sporadic spoken word narratives that sound pretty cool. Then in the last few minutes the band explodes into a high intensity jam that approaches Farflung or Litmus territory. Lots more variety on this one and it’s easily the strongest track of the set.

In summary, The Spacelords play pretty cool instrumental Space Rock, though I’ll repeat that they would benefit from the addition of a singer. I enjoyed the album but only the Side 2 tracks really excited me. I need to check out their previous albums. Note that the LP is limited to 500 copies.