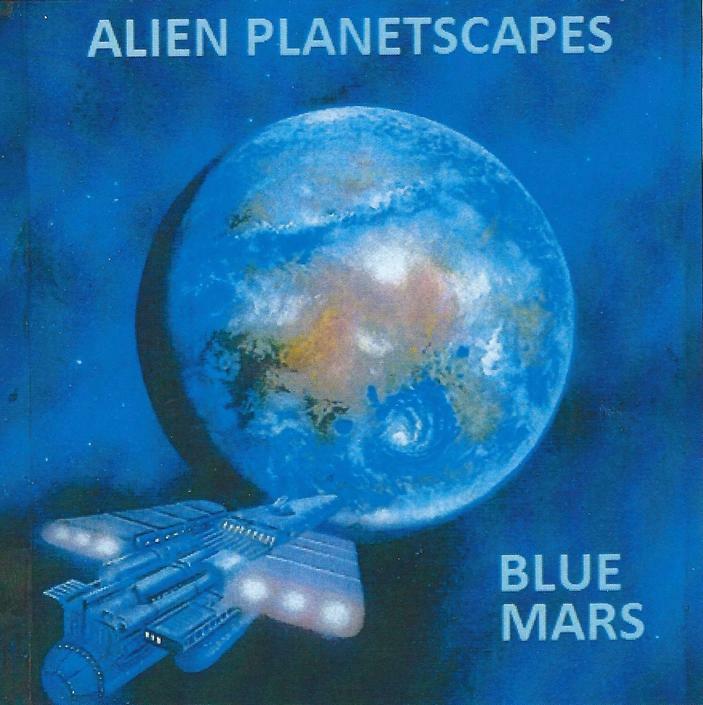 In 2000, a duo version of Alien Planetscapes (AP) – founder and ship commander Doug Walker along with Richard Orlando – performed Red Mars at the Quarkstock Space Rock & Avant Prog festival in Columbus, Ohio. That being my town, I had the pleasure of experiencing this performance. Red Mars was inspired by the first of Kim Stanley Robinson’s Mars trilogy – Red Mars (1993), Green Mars (1994), and Blue Mars (1996). Doug, sadly, passed away in 2006, but his legacy lives on. Richard Orlando recently discovered some sessions that he plans to turn into a trilogy of CD releases, the first of which, Blue Mars, is available now.

The 46 minute set features Walker on flute and Orlando on guitar, plus both utilizing an arsenal of synths, electronics and effects – EMS VCS3, ARP 2600 w/ARP sequencer, ARP Odyssey, SCI Pro One, EMU Classic Keys, Roland JP-8000, CMS MR-2… fun, huh? The set opens with dark, windswept planet atmospherics, engine room rumbling and swirling alien electronics, and builds from there. Like the best of the early era AP duo albums, Blue Mars features a cosmic banquet of electronics that come together like a meteor shower, falling stars, comets, and battle in space all occurring at once. We’re also treated to psych Bluesy, Fripp/Pinhas, and rocking freakout guitar leads, and trippy pied piper flute, both of which sound great amidst the alien invasion electronics. I like the heavy guitar presence, which is what mostly sets this apart from the early AP duo electronic efforts. Like the best soundtrack music, we’ve got some seriously image inducing stuff here, and the intensity level is predominantly high throughout, though there are plenty of soundscape and spacey sound experimental segments, as well as mellow moments like Claybourne’s Dilemma, which is a pleasantly dreamy guitar and flute piece.

The set is comprised of 18 tracks, mostly in the 1-3 minute range. I noticed a couple comments on the Alien Planetscapes Facebook group that wished there were fewer, longer tracks, that took more time to develop. I’m sympathetic to this, but while so many short tracks is unusual for Alien Planetscapes, after a few listens I found myself mostly oblivious to the gaps and hearing the entire album for the concept piece that its intended to be.

NOTE that all proceeds outside shipping will be given to the late Doug Walker’s son Evan.
To order Blue Mars, Paypal $12 to Richard Orlando at porcupinejones@yahoo.com. That covers shipping in the U.S. Anyone outside the U.S. should email him first.
Check or MOs can be sent to Richard Orlando, 19908 32 Ave #3R, Flushing, NY 11358