Spiralmaze – “Back To The Center” (self-released 2014, CD/Download) 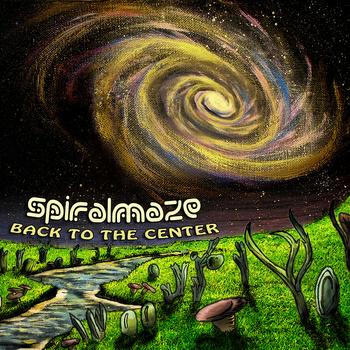 Spiralmaze are a Greek quartet who play a heavily Ozric Tentacles influenced brand of instrumental Space Rock. They evolved from a band called Soundtrap, which played an eclectic mix of Space-Prog, Metal and Electronica. Spiralmaze consist of George Arestis on guitars and synths, Aris Terzakis on bass, Eftihis Chelioudakis on drums, and Jon Mor on guitar.

Multiverse opens the set with rocket fueled, Ozric inspired electronica and blistering guitar that is like Ed Wynne at his most rip rocking and most melodic. Yes, this is VERY Ozric influenced, but Spiralmaze really do it GOOD. This is powerhouse Space Rock and a potent album opener. Hwang Ho is a mind-bending blend of Trance and melodic but high power Space Rock, with swirling electronic patterns, tastefully ripping guitar leads and a steady paced but commanding rhythmic pulse. Spiralmaze veer into different territory on Remipede, with its Eastern influenced chants plus heavy Prog and Metal alongside rapid fire synth patterns. Myriad Small Creatures is a cool grooving, magic carpet ride Dub-in-space tune with speak-in-tongues Mullah chants. The Longest Day Parts I and II comprise one 13 minute track, with Part I being the dreamy soundscapes intro. Part II is a Trance whirling atmospheric Space Rocker with a cool sounding Space-Prog synth melody, deep space synth patterns, Reggae grooves, heavy driving Space Rock and more. It’s like a summation of everything this album is about. The album closes with the title track, one of the heaviest rockers of the set, featuring monster Ozrics styled Space Rock fused with crunchy Metallic rock, but is also tempered by more laid back accessible Prog melodic segments.

In summary, this is one hot smokin’ album. Spiralmaze are crack musicians and a tight-as-a-knot unit. The Ozric Tentacles influence is overt, but Spiralmaze do it so damn good and they do take a number of interesting detours.

To stream, download and order the CD visit: http://spiralmaze.bandcamp.com