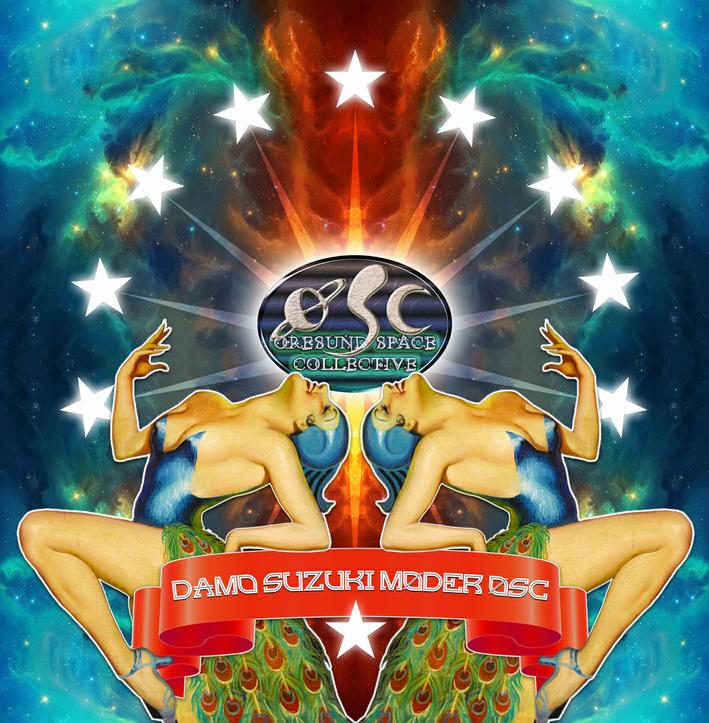 Recorded Valentine’s Day 2013 at the Dragens Hule club in Copenhagen, Denmark, this live set consists of the entire concert in the order it was played. On this night the OSC lineup was Nick (The Univerzarls) and Nicklas (Papir) on guitar, Mikael (SKL, Agusa) played guitar on two tracks, Pär (Sgt. Sunshine, Carpet Knights) on bass, Birk on drums, Dr Space, Mogens and Rasmus on keyboards and synths, and the great Damo Suzuki on vocals.

Damo has been a prolific performer over the years and what has kept him interesting is that he always performs/tours with different musicians, and the merging of his trademark vocal style with a particular group of musicians results in a different experience each time. The possibilities are even more interesting with a band like OSC, whose fluid lineup results in something a little different of their own across albums. And being an all-improvisational ensemble, OSC are a perfect marriage for Damo’s freeform avant-scat-chant vocal style.

We’ve got 6 tracks, all in the 14-24 minute range, spanning 6 sides of 3 vinyl LPs (or digital download), for over 2 hours of improvisational space rock jamming delights. Damo’s Forste OSC Flyvtur is a slow steady burn, with the band tripping along in space exploratory jazz mode as Damo vocal jams. It’s got a cool combination of rolling rhythms, ambient/soundscape guitar licks and cosmic electronics. Nothing intense or heavy on this one, though the band rock harder near the end, sounding at times like a more overtly space rock version of the San Francisco band Mushroom. The whole piece is like an extended buildup in which OSC and Damo converge and meld. Energisk Reaktion 1 is next and right from the beginning the pace is lively, grooving along like a space rock Grateful Dead, soon veering into a sometimes Gong-like brand of jazz-in-space (think Hillage!). I can’t emphasize enough the importance of the bass/drums rhythm section which keeps things rolling along at a steady rocking, tightly knit pace, and that is a consistent characteristic throughout the set. This segues smoothly into Energisk Reaktion 2, so together they are really a single 30+ minute piece. This one gets more ambient space jamming, though still jazzy rocking, and includes some killer guitar effects and cool cosmic Prog keys. Later in the piece the mood gets more acid-space rocking intense, though the band come in for a gently ambient rocking landing.

And on we go throughout the set. Imagine Gong, Ash Ra Tempel, space rock Grateful Dead, space rock Allman Brothers, Mushroom, and Ozric Tentacles all rolled into one, AND with Damo Suzuki on vocals, and you’ll get something like this thoroughly enjoyable set of improvised space rock. I like all of OSC’s albums but this has quickly become one of my favorites, and not just because of Damo’s participation. These are some of the best jams I’ve heard from OSC and Damo is icing on the cake. The band and Damo take off and explore, finding that ideal medium between freeform improvisation and a sense that the spacecraft is headed down a clear, goal oriented path. Note that the 3-LP set is available in an edition of 500 copies, 100 color and 400 black, hand numbered.

6-20-14 UPDATE: When I published this review I just had the digital promo. The 3-LP set arrived today and it is freakin’ BEAUTIFUL!! Triple fold-out, band photos, and killer artwork with colors that leap off the jacket. And it’s so thick you could put it on your bookshelf. Simply gorgeous.