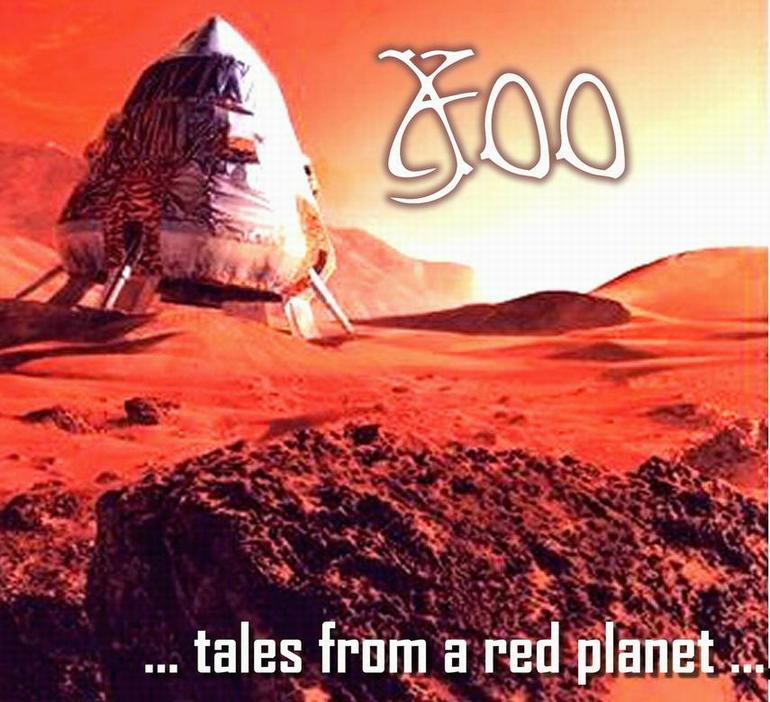 It’s been a long time since we’ve had new music from Xoo. I believe the Brain Tattoo EP was their last release and that was in 2009. Well Xoo are back and in stellar form with a new full length album, Tales From A Red Planet…. This is… hold on to your hats… a CONCEPT album! Here’s the scoop:

The year is 2073. Mars has been terra-formed. There are colonies. There are cities. There is agriculture. There are frontier towns and there is freight and mining. But there are problems too. The same old issues are arising: pollution and Martian global warming, crime and social problems, psychological isolation and political unrest.

Sound familiar? The album opens similar to the beginning of Pink Floyd’s Wish You Were Here, only far spacier and with lots of UFO electronics. But we quickly settle into a spacey, drifting and gently rocking intro with a mission control voice announcing a landing on Mars. Throughout the album we alternate between songs, space-ambient interludes, and various types of announcements, adverts and radio. Like the narrative that speaks (“sells”) positively to the prospects of this new life on Mars. A Word from the Martian Tourist Board is a humorous ad for shopping and touring on Mars. “Have a nice, red day!”. Radio Free Mars is a station you can tune into. And I got a kick out of the announcement for Zephyria, the mistress of Martian erotica, appearing at the Cafe Elysium.

The album has lots of killer songs too. ReGenesis is a Space-Prog tune about new life on Mars. I like the combination of deep space orchestral keys and potent Alan Davey styled bass. Space Trucker’s Lament and Blues For A Red Planet are both immediately catchy space rock ‘n roll songs that are like Hawkwind with an 80s pop feel and a symphonic Prog edge. Yeah, I know, sounds strange, but these are excellent melodic songs. The finale on Space Trucker’s Lament is more overtly Hawkwind sounding, rocking hard amidst multiple swirly synths and mellotron-like freakiness. And Blues for a Red Planet includes blazing alien electronics, melodic guitar leads and robust bass leads. Other highlights include Lost, a pastoral but ultimately intense space-orchestral song with vocals by Canadian singer Heather Dale, and has a kind of Hawkwind Golden Void feel. We kick into high gear on Frozen!, a space rock ‘n’ roller that’s like Hawkwind with metal edged guitars and spirited dance grooves. Zephyria is a thudding slab of 70s hard rock, symphonic Prog and dance infused Hawkwind. And State of Emergency is a spirited space rock ‘n’ roll song that closes the album with Mars in a state of repression and rebellion.

Damn, I sure do enjoy this album. Xoo do a great job of blending Hawkwind styled Space Rock with Progressive Rock influences and good old rock ‘n’ roll with catchy melodies. And they do a fine job of telling their story with various narrative and instrumental transitions. The album is available as a download purchase only. The artwork is beautiful and will make those with turntables dream of gatefold vinyl.

For more information visit the Xoo web site at: http://www.alien8.co.uk