Seven That Spells – “The Death And Resurrection Of Krautrock: IO” (Sulatron Records 2014, CD/LP/Download) 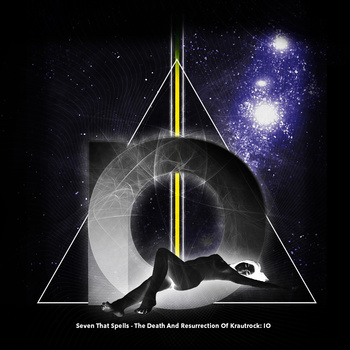 In 2011, Croatian monster Psych rockers Seven That Spells released the first in a planned trilogy of The Death And Resurrection Of Krautrock albums. That was titled AUM. Now they’ve unleasehed the second in the series: The Death And Resurrection Of Krautrock: IO. The band are the trio of Niko Niko Potocnjak on guitar, Jeremy White on bass, and Niloa Babic on drums, with assistance from Albin Julius on synths, Hammond and kazoo, and Nikola Uroševic’ on throat singing.

The first of the 5 tracks is In II, which consists of high energy Prog infused Hard Rock with a cosmic edge provided by the supplemental alien electronics. We’re also got two extended workouts. The 18 minute IO starts off with trippy, passionate chanting vocals and Eastern styled Psych guitar with an early Amon Düül II flavor. The band jam along in this mode for several minutes before falling into a quietly floating meditative interlude. Niko’s guitar plays slowly bubbling licks against a shamanic atmospheric aura, before launching into a heavy rocking Eastern flavored jam that’s like Black Sun Ensemble on steroids. The band rock hard and Niko blasts off with some killer solos. Overall a nicely ass kicking blend of Eastern Psych influences, early Amon Düül II flavor, Acid Mother’s Temple, and intricately played Hard Rock. The 14 minute Burning Blood has a similar blend of influences and includes some monstrous Prog-Psych jams with whirling dervish levels of intensity and cool rocking guitar and solos. One is quite different, being a 2 minute combination of romantic solo piano and noise-drones. And Out II sounds like it would have fit neatly on one of the first few Amon Düül II albums. These guys never disappoint and can always be counted on for a killer set of heavy Psych rock.