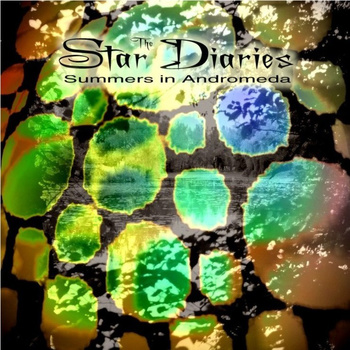 The Star Diaries are the Canadian duo of Jeff Fitzgerald and Dean Marino. Between them they play an array of instruments including electric and acoustic guitars, bass, keyboards, synths, ektara, harmonium, percussion, and ghopi-chand. I’d never heard of a ghopi-chand and Googling it just turned up some Bollywood actor. When I asked Fitzgerald about it he shared that the ghopi-chand and ektara are single stringed instruments he purchased at an Indian music store in Toronto and these are the names they were given. I found that interesting.

Summers in Andromeda is a concept album that tells the story of a space traveler, though it could be any traveler, or even just a life journey, who takes a step beyond what he knows. That’s the core theme. Transit Through the Alamak System opens with deep space atmospherics, effects, rocking percussion and an acoustic guitar twang that gives the music a cosmic Spaghetti Western vibe. This is followed by Deepest Sleep, which starts out as pure soundscapes and atmosphere, with light tinkling and drones, before introducing a somber yet catchy keyboard melody.

Both these tunes set the stage for the epic 23 minute Summers in Andromeda. The feeling of melancholy continues, though it’s not altogether sad, as the melody is uplifting and the music has a Pink Floyd feel though with far more cosmic keys and the effects inject an alien sensation. Then around the 4 minute mark the music transitions from somber to pure joy as we launch into a strumming acoustic guitar and spacey keyboard driven groove. The theme continues to evolve and the entire feel is that of Psychedelically pastoral Prog Rock. The acoustic guitar is quite beautiful and I like the way it combines with the spacey effects, and later a lovely flute/mellotron sounding melody. We also traverse through extended soundscape and effects segments, my favorites being one that includes chirping birds, creating the feel of a dark cosmic forest, and another that has a classic early Tangerine Dream sound.

Some of the melodies seem to be screaming out for vocals, and indeed one of the key melodies is revisited on the following song, One Summer in Andromeda, which is the sole vocal track of the set and a beautifully flowing, bucolically spacey Prog-Psych tune. Long Gone August is a short, spaced out and trippy melodic piece that leads into the 14+ minute Mind of Ptah. Ptah was the Egyptian creator god and sure enough, right away the music consists of Eastern influenced Psych, courtesy of ethnic percussion and the one stringed ghopi-chand, ultimately launching into a spaced out dance of the Pharaohs realm with acidic guitar, cosmic Prog keys, and intense spaced out electronic effects. In search of ancient astronauts indeed. Naturally the music evolves through multiple themes. I especially like the Space-Prog jam with cool rocking Dave Gilmour styled guitar solo, which sounds great along with the grooving tribal percussion and alien effects. Finally, In the Fragile Light closes the set on a spiritually uplifting note, with acoustic guitar that has a George Harrison My Sweet Lord feel, and is accompanied by wah’d Psych guitar, symphonic keys and a rocking beat. A happy ending.

In summary, Summers in Andromeda is an enjoyable and well done set of Space Rock inspired Progressive Rock. I like the solid melodies and Fitzgerald and Marino do a good job of thematic development on their extended tracks. That said, while the album holds up admirably being predominantly instrumental, I do think it could have stood for more vocals, especially given the strength of the singing and lyrics on One Summer in Andromeda. But that’s just something for our dynamic duo to consider for (hopefully) future albums.

To stream and download visit The Star Diaries Bandcamp site at: http://thestardiaries.bandcamp.com
Note the invitation to “Name Your Price”, which allows you to make a contribution or simply help yourself.