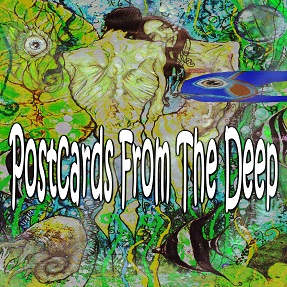 Fruits de Mer Records sure come up with fun ideas. Postcards From The Deep is a box set with ten square flexidiscs… that’s right, FLEXIDISCS… each with a cover song by ten contemporary artists, and each including a square 7″ postcard. The theme was originally going to be Freakbeat, but ended up all over the Psychedelic thematic map. Here’s the rundown…

The Luck Of Eden Hall do a rip roaring rendition of the Count Five’s Psychotic Reaction, with gnarly psych guitar and freaked out electronic effects. The Thanes retain the Garage-Psych tone of The Pretty Things’ LSD but add a number of twists, from trippy Indian ragas to Bluesy harmonica. Brainticket’s trio of early 70s albums are favorites of mine, often being lumped into the Krautrock label even though the leader was Dutch Belgian. Astralasia take their namesake song Brainticket and add a funky rolling groove, soulful rocking organ leads, monster guitar solos, and lots of spaced out craziness that nicely ups the ante on the original. Icarus Peel takes The Avengers’ Theme and turns it into a high intensity Psychedelic guitar monster showcase. It’s a real Hendrix on steroids rockin’ SMOKER!

Making this set even more fun is several obscure songs by bands I’ve never heard of (I got quickly acquainted by visiting the Psychedelic research scientist’s archive – YouTube). Dragonfly were a Dutch band who released one EP in 1968. The Loons take their song Celestial Empire and add a chunky rockin’ kick to it, along with ultra cool rapid-fire wah’d guitar and ripping licks, plus intense alien oscillations. The Calico Wall were a Minneapolis band who released the Garage-Psych song I’m A Living Sickness as a single in 1967. The Crawlin’ Hex, which is Fred Laird from Earthling Society’s new band, take the core riff of the song and give it a dark, cavernous, feel, and get pretty wild and spooky with the vocals and effects. Satori were a Texan band who released Time Machine b/w 1000 Micrograms Of Love as a single in the late 60s. The Blue Giant Zeta Puppies take on Time Machine and turn it into a steroidal, spaced out Surf-Punk Psych rocker. The Hippies were a South African band whose funky, soulfully Psych rocking instrumental Soul Fiction was released in 1968. The Past Tense are largely faithful to the original, but inject a space age vibe and a slightly robotic twist to the rhythmic pulse. The Sorrows’ Take A Heart is a 1965 song that sounds like it could have been the Yardbirds with a different singer. Schizo Fun Addict blast the song into space, blending a dirty garage vibe with swirling cosmic effects and mucho alien freakiness. You Just Gotta Know My Mind was written by Donovan for Dana Gillespie, whose 1967 recording of the song was classic 60s Pop. Crystal Jacqueline quickens the pace and really Psychs it up with killer dual trip guitars. She has done some of the best cover songs I’ve heard in the past couple years.

The set will be available late November and is limited to 700 copies. Each box set comes with a CD that compiles all ten songs, though apparently some of the bands submitted slightly different versions for the CD, which is even more fun, right? If interested you better hurry because Fruits de Mer releases sell out QUICK!