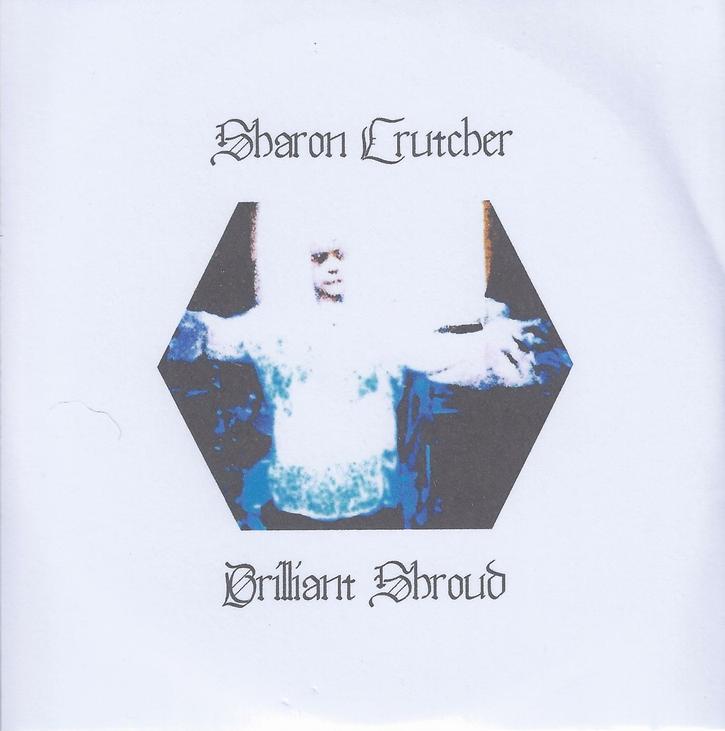 Sharon Crutcher is the space whispering and equal parts bewitching/angelic vocalist in Austin, Texas band Book of Shadows. I heard last year that she was working on a solo album and it’s finally been completed and released on CD by the Reverb Worship label. Brilliant Shroud includes a dozen songs, some featuring Sharon solo, some with hubby and Book of Shadows co-member Carlton Crutcher, and some with assistance from members of Book of Shadows and ST 37.

Set opener Smoke and Mirrors consists of floating, Gothic, lightly symphonic synths and a pulsating robotic electronic pattern that lay the foundation for Sharon’s whispery half sung/half spoken vocals. It’s haunting, yet strangely uplifting, like some kind of New Age cosmic Wicca ceremony. Namaste goes deep into space, with Hawkwind spacecraft engine room and whooshing/swirling effects providing the backdrop for Sharon’s earth mother spoken word message: “A light came down through the top of my head. I floated out of my body. I was pure energy. I found my true self in the stillness of the space between my thoughts”. Elephant Tree No. 1 and Love Is A Seed feature a unique brand of Psychedelic Space-Folk. Elephant Tree No. 1 is especially strong, with Sharon’s spectral songbird vocals amidst a bubbling miasma of drugged acoustic guitars, slowly soloing guitar and bass, soundscapes and effects. I like the melodic alien-Dub of Where Do We Go From Here?, with its odd but cool combination of dreamy flowing song, Dub groove, and off-kilter freaky electronic patterns. Radiant Childe is a playful adventure in sound effects and experimental space exploration, wrapped around a mystical song. Old Sweetie and Shifting to the Vth Dimension are inspiring songs that bring to mind something Enya might have recorded after taking a Space Rock master class. Sun Dog is an alluring and disorienting blend of Folk-Psych, trippy dissonance and soundscape experimentation. Krisna Mantra is a darkly cinematic experimental Space-Punk-Goth rocker. Green Briar is the sole instrumental track, consisting of moaning and howling electronics and a repetitive guitar pattern that sounds like a traditional Folk style with an avant-garde Psychedelic twist. The mixture of sci-fi and traditional elements has a strangely alluring and difficult to describe appeal. Finally, Sharon’s dreamily haunting vocals on Call to Victory float like a ghost through a mechanic sea of bubbling, pulsating and percolating alien electronics.

In summary, Brilliant Shroud grabbed me on the first listen, though I had to spin it more than most albums before I could write about it, perhaps due to the unusual blend of styles, as well as the mixture of emotions it induced. There is no simple description for this music where Space Rock, Folk-Psych, Goth, electronica and plenty of cosmic undefinables coexist. Sharon is an enchanting vocalist and has created one of the most seductively off the beaten path albums I’ve heard this year.

If all this has aroused your interest you’d best hurry because the CD has been released in a numbered edition of only 40.