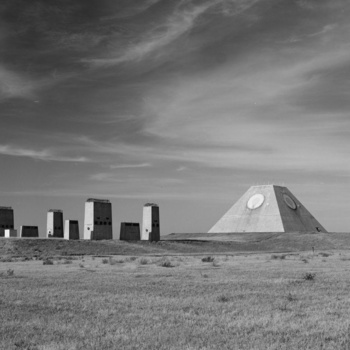 I’ve been following guitarist Jason Kesselring’s work since the early Aural Innovation days, starting with the late great Minneapolis based Space/Psych/Kraut Rock band Skye Klad (who I also got to see live at the 2000 Strange Daze Space Rock Festival). Kesselring went solo with Satyrswitch, a vehicle to explore his interest in Jansch/Graham/Basho guitar styles and other acoustic music. Now based in North Dakota, Kesselring’s solo project of recent years has been Comets ov Cupid, which across his first three albums covered textural Ambient/Drone explorations and blistering Space Rock for the alchemically inclined.

The album consists of 4 tracks in just under 40 minutes. All the pieces were played in one take with little to no overdubs. Acoustic and electric guitars are the main instruments, as well as theremin and a Micro Korg on the opening track, Sein Und Zeit, which starts off with expansive yet minimal soundscapes and spartan guitar patterns. Multiple guitar parts are gradually introduced until it sounds like a cosmic symphony of repetitive chordal arrangements and spaced out solos which brought to mind a Cluster enhanced duet between Manual Gottsching and Robert Fripp. This bleeds into the 15 minute title track, which begins with a dark, lightly symphonic drone and strange voice samples that repeat “Eko Eko Aradia”, which I learned from good ‘ol Wikipedia is the opening phrase to a Wiccan chant. The guitar adds to the drifting, cosmically orchestral feel, creating a doomy impression and lacing the atmosphere with swirling and soaring waves of caustically Psychedelic strikes and screeching runs of what sound like an acid damaged violin. The music soon settles into a sweeping yet disorienting minimalist orchestral exploration that straddles the line between intense acid-noise and cloud floating, atmospheric drone. As the finale seeps into Fly By The Comet, we sail along with lightly jamming acoustic guitar and hovering efx’d guitar that’s like a soundscape generating, gliss-like banshee violin, which becomes darkly intense and even a little rhythmic rocking as it morphs into The Infernal Star. And sure enough, the multiple guitar parts start to rock out like some kind of avant-Psychedelic Branca guitar symphony. The intensity increases to apocalyptic levels, with smoldering stoner doom surges and a sense of sheer cosmic corrosion. Yet despite the high intensity skirmish, the music never loses a general perception of meditative drift.

As an artisan/constructor of aural landscapes, Kesselring nimbly blends his classic Kosmiche and ambient/minimalist influences to create a journey into the furthest reaches of Psychedelic color and texture. And he does so without always so heavily drenching his guitar with effects that it’s beyond recognition.

The cover photo is worth a mention as it aroused my interest. It’s a futuristic ruin known in Fortean Folklore as the “North Dakota Illuminati Pyramid”. It’s a relic from the height of the Cold War though many conspiracies still abound as to its real function. When I questioned Jason about it he pointed me to a web site which explained that it was situated on a missile site radar complex used to locate missiles fired from foreign powers at the USA so that they could be destroyed. The base was armed with 30 Spartan anti-ballistic missiles with thermonuclear warheads and sixteen short-range Sprint missiles. How fortunate for the North Dakotans to play host to all that Cold War fun.