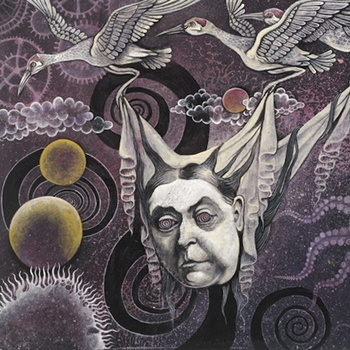 If Syd Barrett were an 80s Goth he would be Edward Ka-Spel of the Legendary Pink Dots. At first the album did not strike me as anything great, but after several spins the album both nods toward the 25 year old Legendary Pink Dots classic LP The Maria Dimension (which is getting a 5LP box treatment from the Soleilmoon label very soon) and 80s Edward Ka-Spel albums like his China Doll series of LPs from the 80s. The vocals are cryptic and dark and gothic, a strange piano, odd finger drums and the intro to the first song called Limburgia has a Indian raga like beat. All the 8 tracks flow like a single sequence of interworked songs, though they are all different and separate tracks. Here we do not have the Noise sculpture and abstract Industrial splatter like on Dream Loops or Ghost Logik from a few years ago, nor the electronic madness of Edward’s Dream Logik trilogy. The third track, The Border Beyond, has ominous police sirens in the distance closing in and leaving again, fading in and out again like a spectre on the “force”. Edward sings very low key. It takes either great concentration to follow his lyrics, or you can do like me, imagine the darkwave ramblings of a 80s Goth Syd Barrett, though as a lyricist Edward and Syd do not share any similarity, just the voice and the beatnik whimsy style. I ordered the double disc Deluxe set and got a second CD with two tracks, one song is etched as vinyl on the CDR and plays perfectly on my turntable while the other song is there next to it as a digital track, and they both share the same side of the disc. Those two tracks are very analogue and Victorian style forms of musics, maybe after a little Opium and Absinthe…

Overall this is a great grower of an album. It will take me a year to fully absorb all its layered and cryptic meaning, but the melody and song and moods are there. Get this CD if you like 80s The Legendary Pink Dots, and the Chyekk / AaAazhyd / Eyes! / Lyvv China Doll Ka-Spel LPs. They have been remastered by BLRR and sound very nice. Let Edward paint your soul Victorian and prepare yourself for a dose of Barretesque Steampunk Darkwave.