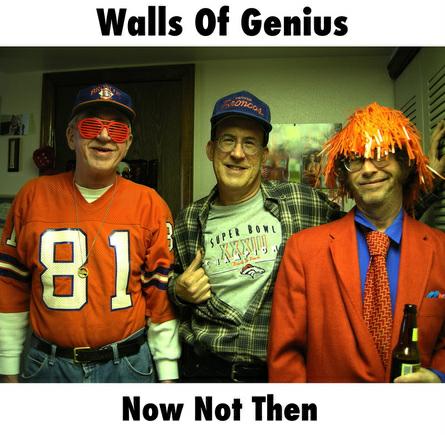 From 1982-1986, Walls Of Genius (WOG) represented everything that was totally twisted and creatively cool about that era’s homemade music cassette culture underground. These guys were all over the map, recording songs, acid rock, spaced out excursions, avant-Prog, sound collage and abstract experimentations. And nobody did cover songs like WOG. Their lovingly art damaged assault on songs by Steppenwolf, Creedence Clearwater Revival, the Beach Boys, Captain Beefheart, Chuck Berry, The Beatles, and plenty more was akin to The Residents’ treatment of the Stones’ Satisfaction. Now Not Then consists of the first WOG reunion of Ed Fowler, Evan Cantor and Little Fyodor since 1986, and across two discs offers up heaping doses of pent up creative muscle flexing that has been lying dormant in the intervening years.

Disc 1 launches with the 16 minute Oh Yeah, a funky rocker that’s like a marriage of sci-fi New Wave and Krautrock. We’ve got a B-52s gone Goth keyboard, quirky Funk, wildly soloing acid-fried Industrial-Psych guitar, jack-in-the-box popping alien electronics, and Fyodor’s distinctive loony bin vocalizations (Ed. Note: Turns out the vocals are Evan Cantor. Had me fooled). The music chugs along at a funky robotic pace, being strangely dance grooving and interstellar exploratory. Next up is a cover of the 1970 Temptations song Ball Of Confusion. WOG succeed in maintaining the song’s Soul/R&B core, while injecting it with a raw rocking, good time Blues-Psych rock ‘n roll edge. The covers continue with WOG’s rendition of the 1970 Chairmen Of The Board song Give Me Just A Little More Time, which is faithful to the original but done totally carnival asylum WOG style. We’re treated to soloing guitar in heaps on Geezers On Steroids… or is that some kind of Mike Ratledge Soft Machine keyboard? In any event, it’s a crazed combination of screaming acid-Psych mind-fuckery and two left footed dance grooves. A Flying Cluck follows and is like an atmospheric but still completely weirded out wind down to Geezers. Warning System Test is a humorously whimsical mock on old emergency broadcast system tests. I like how the guitar strums along while the freaked out Psych guitar (or keyboard) blazes and a slide whistle loop-de-loo flitters as a voice chants the warnings. And Beer Beer Beer is a totally raw yet shit kickin’, roadhouse stompin’, good time Blues rocker that closes Disc 1.

Disc 2 draws heavily on late 60s/early 70s Hard Psych Rock influences, though with WOG there is nothing straightforward about the results. I like the raucous Psychedelic Country Boogie-Woogie with killer freakout guitar and a stern message for America on New Amerika Futura. The monster guitar continues on All Hail Great Cthulhu, which is like a dirty Psychedelic garage version of Santana. Telescopic Array features jazzy, soulful rock and Psych guitar jamming with a zany and endurance challenging slide whistle leading the way. WOG go hard Psych Rock on Indecent Compulsion, a heavy 70s styled rocker with yet more ripping guitar solos and a propulsive rhythm section. Unrestrained By Discipline travels a similar path as Great Cthulhu but blasts off into space, being a freeform jamming rocker with a Krautrock meets Woodstock experimental edge. And more awesome guitar! It’s really nuts, coming across like Jorma Kaukonen, Helios Creed and Snakefinger all rolled into one, if you can imagine that. WOG continue warming to this theme on the appropriately titled Brainfracking, which once again has a strong 60s west coast feel, but blends it with the type of spaced out jamming excursion that Krautrockers like Guru Guru were known for, plus some good ‘ol trademark WOG zaniness. Wow, heavy heavy stuff. These two are my favorite tracks on Disc 2. And how do WOG follow these and close the set? They do a ukulele strumming cover of The Beatles’ All My Loving.

In summary, this will be completely recognizable to anyone who heard WOG in the 80s, but is a step beyond anything they did back in the day. Chock it up to all those years of individual experience. BUT… there’s more!

Along with the reunion album, homemade music veteran and energetic make-things-happen guy Hal McGee has put a tremendous amount of work into constructing a WOG tribute site that is accurately labeled, A Comprehensive Online Archive: 1982-1986. This is no cursory overview but a seriously detailed history. There’s lots of biographical info, interviews, reproductions of old WOG catalogs, flyers, posters, and loads of photos. There’s a 37 minute live performance video from 1985 with detailed notes. AND… joy of joys… all the old WOG cassettes digitalized and available to hear online, including detailed notes for all albums. It’s a model of what the web should be about. No stinkin’ Flash or any of that crap. Just INFORMATION driven and lots of it, with the goal being to paint a comprehensive picture utilizing the simple ingredients of words, photos and sound. Check it out.

For more information visit the HalTapes web site at: http://www.haltapes.com
CLICK HERE to purchase Now Not Then
The web site is a goldmine of information for Hal McGee history and projects but be sure and click the Walls Of Genius link at the top of the screen for the information and music packed tribute to WOG.