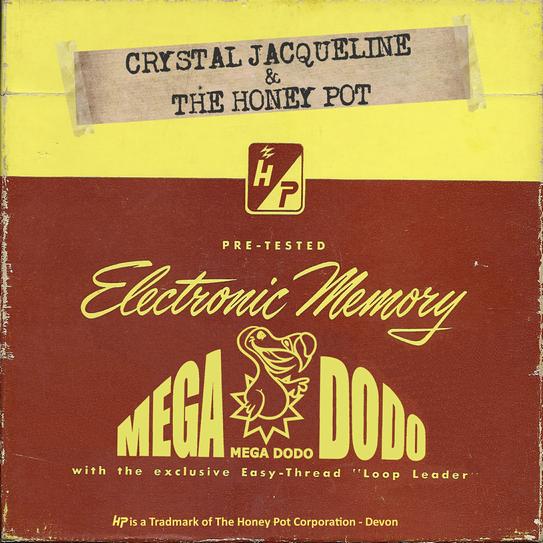 The album opens with upbeat, lusciously melodic and soon rocking orchestrated Psychedelia, with freaky and sometimes Beatle-esqe effects, and a child’s voice repeating the line, “Crystal Jacqueline did not wake up in time. I don’t mean that she was late for a meeting, or even her breakfast. The truth is, she simply didn’t wake up when she was supposed to.” The child is the “storyteller” and these various music and narrative segments consist of surreal and rocking music and fun trippy effects which suggest a kind of Alice in Wonderland theme that loosely strings the album’s songs together. (The child reciting “The White Rabbit lay down and placed Crystal Jacqueline on his tummy” is a great line.)

In additional to the transitional segments we have two excellent Icarus Peel originals. It’s Raining is a high energy Pop-Psych rocker with a catchy melody, awesome spaced out guitars and powerhouse drumming. And The Swan Necked Spider is a sultry slice of cool grooving and soulfully funky Psychedelia.

Rounding out the set are 7 killer cover tunes. Pink Floyd’s trippy-spacey-tribal Remember A Day is amped up with a fuller rockin’ Prog-Psych sound. The Honey Pot’s rendition of White Rabbit is a one-two punch knockout, starting off very much like the original, but then about halfway through blasting off into a monster rocker with symphonic keys and ripping guitars. Fleur de Lys’ garage-pop freakout song Tick Tock is given a wah’d dose of funky grooves, which sounds great combined with the stratospheric guitar solos and classic 60s organ. Mighty Baby’s Egyptian Tomb is similarly rocked up and includes more ripping guitar, which sounds fantastic within a bouncy Pop-Psych grooving context. Great vocal harmonies too! Hole In My Shoe, written and sung by Dave Mason, was probably the most un-Traffic like song Traffic ever recorded, being something of a surreal nursery rhyme ditty. The Honey Pot are faithful to the core of the song but inject a punchy rocking edge, killer psyched out instrumental segments and guitar solos, and great vocals from both Peel and Jacqueline. For Curved Air’s Puppets, Crystal is faithful to the spirit of the original, but injects an orchestral feel that’s both flowing and quirky, and dispenses with the jazzy piano, and in my opinion is overall better than Curved Air. Finally, Crystal cranks out a cool rocking cover of The Electric Prunes’ I Had Too Much To Dream.

I love Jacqueline’s vocals, which achieve a difficult to describe blend of potency and lulling calm. And the more acquainted I become with Peel’s music the more I realize what a great guitarist he is. Add in solid production and arrangements and we’ve got a damn fine set of Psychedelia. Recommended.

Note that the CD will be available in March as a boxed set that includes the CD, a 12 page booklet, two postcards, a badge, and… get this… a packet of Mega Dodo patented vinyl simulator (i.e., “space dust”). Better hurry because there are only 100 of them.

For more information and to pre-order order visit the Mega Dodo Bandcamp site at: https://megadodo.bandcamp.com