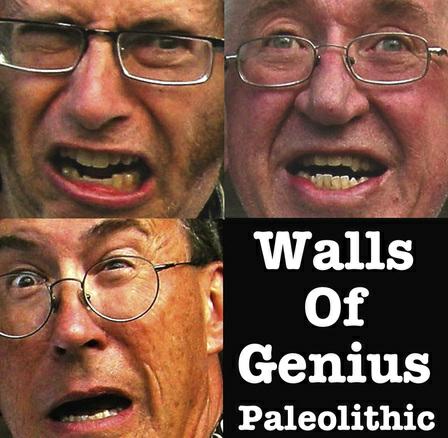 Hot on the heels of their Now Not Then reunion comes the follow up album: Paleolithic. Walls of Genius (WOG) were active from 1982-86, releasing oodles of cassette albums and marking out their own unique spot on the Post-Punk homemade music/cassette culture era. Recorded in Spring 2014, Now Not Then consisted of the first WOG reunion of Ed Fowler, Evan Cantor and Little Fyodor since 1986, and Paleolithic is the love child of a subsequent session recorded this past November.

The set opens with the marching band Psychedelic-Metal inspired Restless Army, which includes fun freaky slide whistle and spaced out alien effects and overall sounds like the inmates from some kind of Rock ‘n Roll “home” imposing themselves on halftime festivities. Rehab Is An Eternal State is a hip-shakin’ rug cutter that lays down a jazzy rhythmic pulse and showcases jamming Psych guitar and whimsical slide whistle on dueling leads, which makes for a fun combo and cool grooving freakout. Provocation is a rhythmically off-kilter but steady paced chunky rocker that recalls the noisy Psychedelic-Punk industrialism of Chrome. The acid fried your-brain-on-drugs fun continues on Paleolithic, for which WOG lay down a tightly wound beat with cool percussive bits and pieces, plus relentlessly jamming and totally awesome guitar leads that sound like an atomic structural mingling of John McLaughlin and Helios Creed. WOG blast off into space on In What Houses Dwell The Wicked?, with guest drum machine and synthesizer by Hal “Captain Mission” McGee. The pace is nervously frantic, punctuated by equally tense guitar, bass and slide whistle leads and lots of groovy spaced out electronics. WOG retain the core jamming theme throughout, while deftly morphing and varying the individual parts, resulting in a skittishly high voltage 15+ minute jam. And wrapping up the set is the 10 minute Astonished Worm. WOG set a frolicsome Funk groove, over which jamming Acid-Psych and lysergic hillbilly guitars duel, along with more slide whistle and effects, the whole being a schizophrenic wig-out that is completely crazy and absolutely freakin’ COOL!

Of course no WOG album would be complete without at least a couple cover tunes. Evan takes lead vocals and ukulele on Donovan’s Mellow Yellow, with Little Fyodor providing nutty vocal responses. Similar treatment is given to The Cat Came Back, the Harry S. Miller Folk type children’s song, which was already strange to begin with, and given the WOG treatment with Evan singing lead and Little Fyodor doing the screechy cat calls.

After a 30 year break these guys are kicking ass, creating music that is crazy, challenging, and imaginatively off the beaten path.

For more information visit the HalTapes web site at: http://www.haltapes.com
CLICK HERE to purchase Paleolithic
The web site is a goldmine of information for Hal McGee history and projects but you MUST click the Walls Of Genius link at the top of the screen for the information and music packed tribute to WOG.