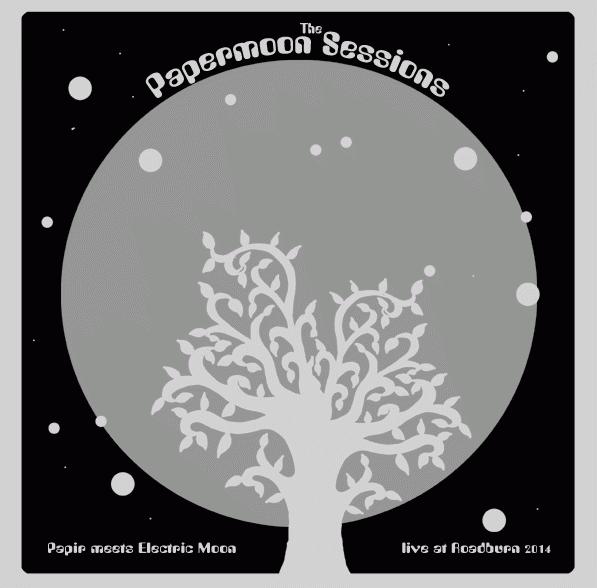 In 2013 Electric Moon met up with the Danish band Papir for some jams that ended up on the excellent Papermoon Sessions album. Sula Bassana and Komet Lulu from Electric Moon met up with the band again along with Mogens from Oresund Space Collective to perform at last year’s Roadburn festival, which produced this new live document. In fact, Sula and Lulu also played at the fest in a live version of Sula Bassana and that performance is yet another new album on Sulatron.

The live Papermoon Sessions includes the complete concert which consists of two stretched out 20+ minutes tracks. Powdered Stars starts right off the bat hot ‘n’ heavy rocking in space. The dual guitar, dual bass, drums, synths and effects 6 piece lineup makes for a powerhouse assault of Psychedelic intensity. We’ve got ripping guitar solos, searing acid laced and bubbling trippy licks and loads of other guitar effects. The quieter moments are among the best, with the musicians maintaining an edgy anxious feel. The guitars and effects trip along ominously and the rhythm section creates a dark, expansive atmosphere while the organ plays an eerie melody. Of course this cosmic narrative ever so gradually builds back up to levels of acid drenched, deep space potency that rocks increasingly harder as if it were one big extended supernova explosion. Blazing Milky Way begins in a much more trance-like state, though the magic is that it manages to be hypnotic while simultaneously acid spaced out intense and even a little doomy. But it doesn’t take long before we blast off once again into soaring through the cosmos, Psych rocking space. I love the feeling of sonic rocking assault as an acid snake guitar weaves a corrosively soloing path amidst a sludgy firestorm of densely packed drone. This is seriously heavy and intense but feels oh so rocking good.

In my review of the Papermoon Sessions studio album I noted how well the musicians from the two bands intuitively gelled with one another and that’s even more the case in this absolutely smokin’ live set.

Note that the CD is available at the time of this posting and the vinyl is scheduled for April 17th.