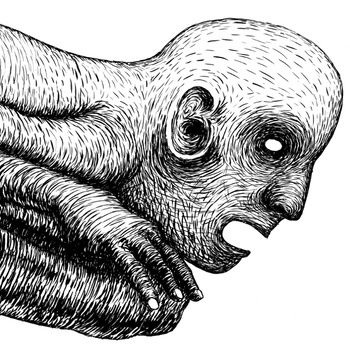 Viaticum are a Swiss dual guitar, bass, drums quartet and Kosmikrock is their second album and my introduction to the band. The set consists of 8 tracks and a full 75 minutes of music.

There’s lots of variety here. Colonize Me Gently is a slow and sultry song with grungy Psych guitars. Entity picks up the pace, being a high energy Stoner Rock ‘n’ Roll tune with cool spacey lead guitar. Fat Heart is a 13 minute spaced out Stoner jam, alternating between trippy soloing and dense wall-of-sound rocking. During its best moments the one guitar is focused on grungy but lulling melodies while the other is exploring deeply efx’d space, including a still grungy but quietly cosmic Space-Ambient interlude that eventually bursts like a thunderclap into sonic assault Space Rock that’s like a multi-guitar and more spaced out version of Colour Haze. Viaticum’s two guitarists really work well together, both as individual soloists and full frontal rocking assault collaborators. In fact, the credits list a guest guitarist on this track so there may be three. The vocals stand out on Hintergrunderfullung, which are backed by rapid-fire marching band drumming and stretched out chasmal guitar licks that gradually take on a searing acidic quality, with it all culminating in a high intensity rocking finale that allows itself to slowly and peacefully peter out. Viaticum return to killer guitar jam mode for the 11 minute Fgy. The first half is psychedelically stoned and heavy rocking. But then the music transitions to a jazzy ambient vibe as the band slowly increase the pace with more interesting dual guitar interplay and bringing the piece to a majestic and beautifully melodic spaced out Stoner-Psych conclusion. Shittle-12 Hates People features 13 minutes of Stoner jazzy vocal number and spacey melodic Stoner-Psych jamming. I don’t see it in the credits but I think I hear a wailing Free-Jazz sax in the background near the end. I also like the extended rumbling acid-drone, alien efx’d, soundscape fade that closes the piece. Beyond The Blue continues in both Stoner-Psych jam and vocal song modes, and while it has its grungy rocking heavy moments (especially the intense finale) the focus throughout is more on pleasantly melodic ambience. Finally, Orbit Island closes the set, being a diverse blend of soaring space guitar, densely crushing licks, and Psychedelic grunge that is both noisily harsh and pleasantly melodic.

In summary, Viaticum excel at blending Stoner, Psychedelic and Space Rock, though they are way off the average every day and brutally beaten Stoner Rock path. The band pack a serious dual guitar punch that kept me on edge throughout and provides lots of interesting variety that bears up to repeated listens.

For more information visit the Viaticum web site at: http://www.viaticumband.com
Stream, download and order the LP at: https://viaticum.bandcamp.com