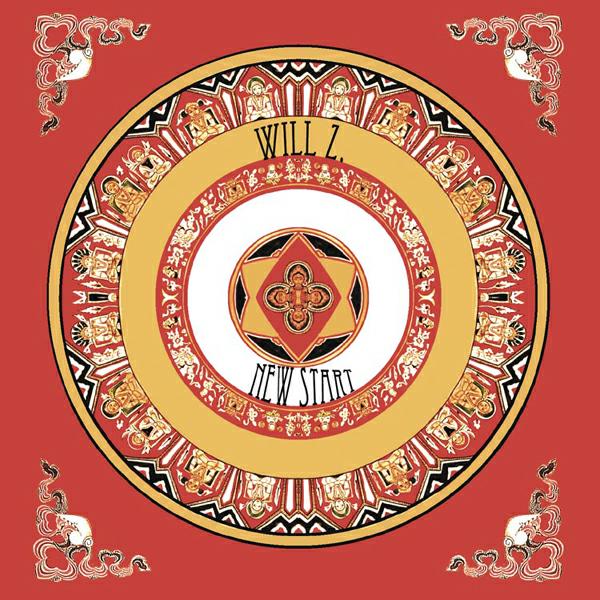 My first acquaintance with Belgian musician Will Z. was through his previous band, Cosmic Trip Machine, who played a 60s/70s influenced brand of heavy Prog-Psych. On his latest album, New Start, Will plays acoustic and electric guitars, sitar, bass, piano, keyboards, synths, Mellotron, percussion and vocals, with guests on percussion, flutes, oud, vocals, and the late great Daevid Allen contributes gliss guitar to one track.

Inspired by Jain philosophy, New Start is an almost non-stop exploration from start to finish. The set opens with the 13 minute Jain Devotion (Parts I-III). After a few minutes of freaky noodling effects, a lazily grooving and nicely melodic Psychedelic tune begins, with sparse tribal percussion, flute, and spacey keys. When the vocals kick in it’s got a beautiful trippy 60s feel, though it’s also embellished with strange soundscapes and staticy drones, as well punchy spaced out synth lines. This melts seamlessly into Namo, which quickly shifts to a more energetic pace, propelled by concert piano and bass and led by choral chanting and spoken word vocals. It’s darkly trippy and the searing sitar wave cuts through the proceedings like a mild acid burn. When the music bleeds into Evil Namo we find ourselves in a firestorm of orchestral madness, with anguished howls, crashing percussion, wind tunnel drones, and general fire and brimstone chaos. For the first time things actually come to a momentary halt and then Greek Loop starts fresh, starting off with a Psychedelic Oriental theme. But it quickly transitions to a chaotic spaced out effects melee that preps things for the rhythmic Nefle, which combines wildly wah’d fuzz licks, pulsating and totally tripped out alien synth waves and ghostly effects, and carried along by a hypnotically thrumming bass groove. Wrapping up the set is the 11 minute Jain Devotion (Parts IV-V), which returns to the seductively Psychedelic album opening theme, though we’re now far deeper in exploratory space, with the music tripping along into a Psychedelic dreamland that is part acoustic, part orchestral, and with an edgy acidic sear. It eventually settles into a jam that powerfully recalls early Amon Düül II at their most freeform and spaced out. VERY intense and my favorite track of the set.

In summary, there’s a lot going on here. The album as a whole is quite a journey with all kinds of thematic twists and turns and really has to be heard in its entirety to be appreciated. The opening and closing Jain Devotion tracks hold their own as stand alones but the shorter tracks they bookend really need the strung together sum total to make sense.