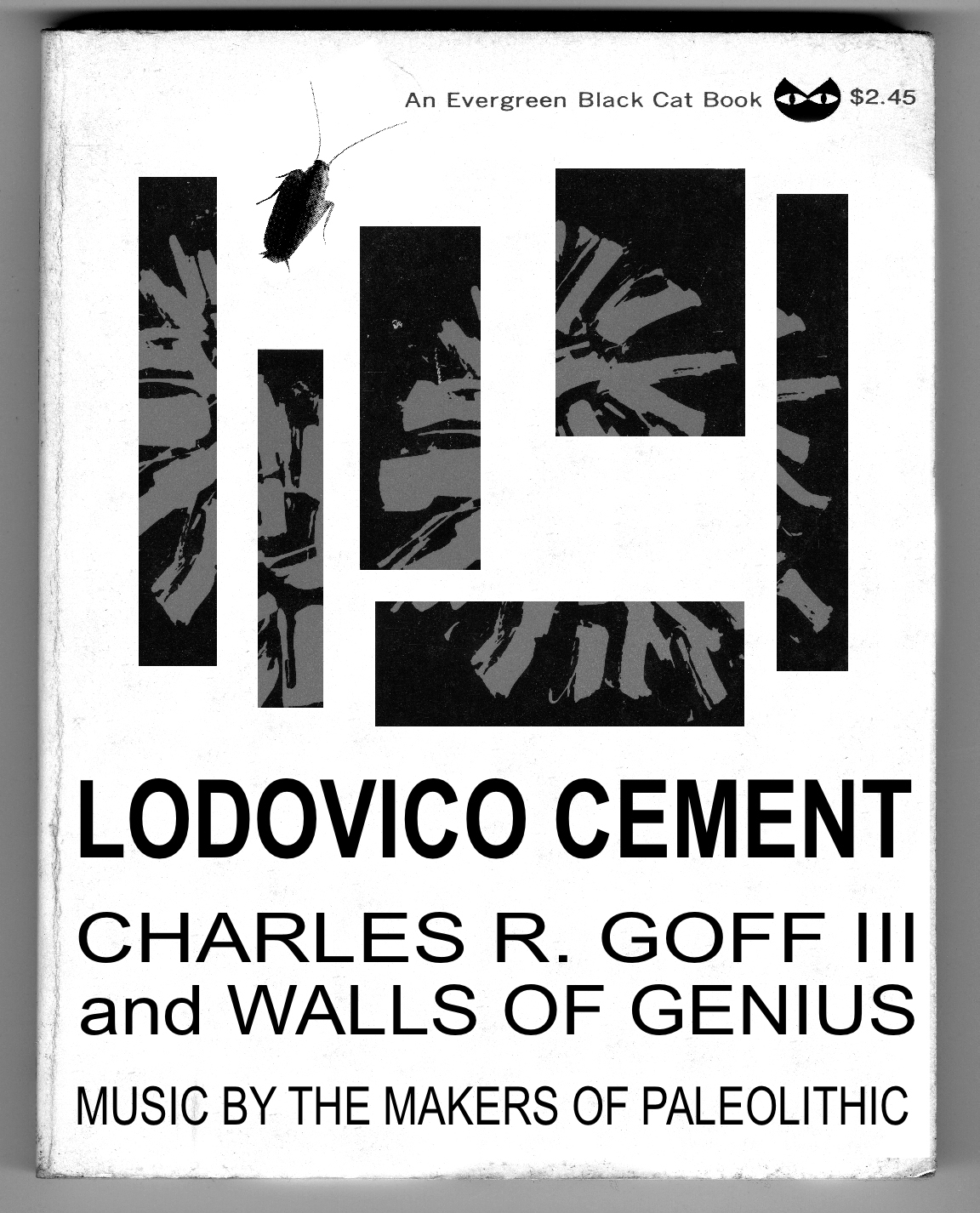 A little background: Earlier this year, 1980s homemade music/cassette culture veterans Walls Of Genius released their first new recordings in 30 years, one album of which was Paleolithic, released on the HalTapes label. There was also an outtakes album titled Paleolithic Rejects which Charles Rice Goff III contributed guitar to. Lodovico Cement consists of Goff’s improvisations with Walls Of Genius which he then reworked into the interpretation we hear on Lodovico Cement, which is quite different from the music heard on the Walls of Genius albums and just as art damaged interesting and fun.

Beautiful Music combines merry shimmering slide whistle with drones, keyboard and guitar to create an oddball moody piece that is just as whimsical as it is darkly foreboding. This theme continues on Mathod in Medness, though it becomes increasingly spacey sound collage oriented and valium paced free-form psychedelic. I like the contrasting moods and sounds that come together to construct a bubbling stew of atmospheric soundtrack and ambient driven, mind-fucked acid jam. Capstan of Industry features sci-fi rhythmic electronic patterns and aggressive but not overly harsh noise waves which are like a strangely musical bowels of the spacecraft engine room soundtrack, but also brings to mind a bee swarm shot backwards across the shortwave radio spectrum. Nova Express is a schizophrenic blend of melodic instrumental ditty and chaotically coordinated alien sound collage orchestra. I like how the guitar jams its repetitive podunk melody as the alien throng impressively attempts to march in step with the melody. The oscillating bevy of sound fun continues on the nearly 30 minute title track, which soon transitions to a dreamy yet frequently intense ambient, sound/drone-scape excursion. It’s quietly introspective for a while, with plenty of haunting moodiness, but also the kind of opposing freakish sounds that made for such a strange but intriguing concoction on the earlier pieces. Things get a little crazier when what sounds like looped acid guitar and other miscellaneous sounds drift through like a topsy turvy whirlwind alongside the principle theme, with the whole mash-up eventually melting into a deep space surrealistic acid rock jam that soon evaporates into an avant-soundscape ether.

As usual, Goff does his creative magic with the Walls of Genius recordings, resulting in an hour of psychedelic, soundscape and sound collage fun that can only be fully digested and absorbed over repeated listens.

For more information (LOTS of it!!) you can visit the Taped Rug Productions web site at: http://tapedrugs.com
Email Goff at: padukem@sbcglobal.net if you would like a CDR or Cassette of Lodovico Cement.
Download Lodovico Cement for free from Archive.org: https://archive.org/details/LodovicoCement
Visit the Walls of Genius Bandcamp site at: http://wallsofgenius.bandcamp.com
Hal McGee put a tremendous amount of work into creating a detailed history of Walls of Genius, including all their 80s cassette albums available for online steaming. Check it out at: http://www.haltapes.com (Click Walls of Genius from the top screen menu)