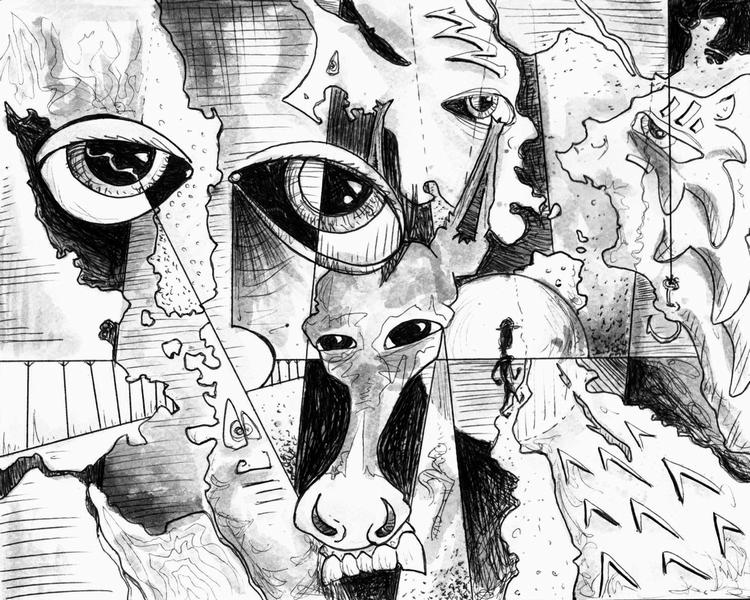 Founded in 1985 by Charles Rice Goff III and Killr “Mark” Kaswan, Disism has been active in fits and starts over the years, including a kick start in 2012. That same year, Goff found several cassette tapes of Disism improvisations and collages that had been recorded between 1988 and 1995, which resulted in the Disism reDIScovery series, of which Bay Side Story is Volume Seven. Goff has taken these recordings and edited them into the form heard on these reDIScovery sets.

Introducing Freddie And Donkey opens the set with a child improvising the introduction to a variety show as cello and electronics warm up, finally inspiring the child to sing along. Talk Of The Town consists of music stumbling along in drugged, surreal fashion like a 78rpm record struggling between 33 1/3 and 45rpm, accompanied by a whimsical party band at normal speed and includes intermittent narration about murder in Oakland and other less than pleasant area news. Eliminate Panic Eliminate Fear is next, featuring a fun combination of jolly guitar and alien electronic melodies jamming away and accompanied by freaky scat-like synth effects, choral chanting female vocals and documentary voice samples. The Extruding Of Golden Grain is a creatively goofy children’s tune (that would seriously confuse the kiddies) enhanced by a variety of sound and percussive patterns. Navigating The Nimitz is a melodic and rocking guitar rumination, including some cool Frippoid and Beefheart styled bits. N Judah Muni is another fun tune, feeling an like an acid fried and Residents imbued meditation.

A shorter version of Walk Into The Sunset was originally released by EE Tapes of Belgium in 1998 on the cassette album Remnants From Magic Carpets. It’s a sprightly chamber duo of impassioned cello and chipper synth, with the cello handling the Classical chores and the synth adding a kind of alien hoedown element. The result brings to mind a lysergic interpretation of a Carl Stalling soundtrack (though I’m convinced Stalling and all those Warner Bros. guys had to be on acid themselves). Finally, the 17 minute The Tenor Of Temescal is like a roundup of everything we’ve heard prior, which I would describe as Psychedelic music for the experimental set. This is seriously dosed stuff, featuring freeform jamming guitar solos, electronics, and cleverly fucked up tape manipulation. At times I was again reminded of an artistically fowled, acid rock take on a Stalling soundtrack, but we’ve also got space electronic freakouts and general good fun sound collage mayhem.

There’s lots to soak in here, which is a comment I could make about most offerings from the Taped Rugs label, and from one spin to the next I know my descriptions would be altered at least a bit. But you get the idea. Note that Goff has threatened to unleash a brand new Disism set of recordings. I’ll be looking forward to those.

For more information (LOTS of it!!) you can visit the Taped Rug Productions web site at: http://tapedrugs.com
Email Goff at: padukem@sbcglobal.net if you would like a CDR or Cassette of Bay Side Story.
Download Bay Side Story for free from Archive.org: https://archive.org/details/BaySideStory