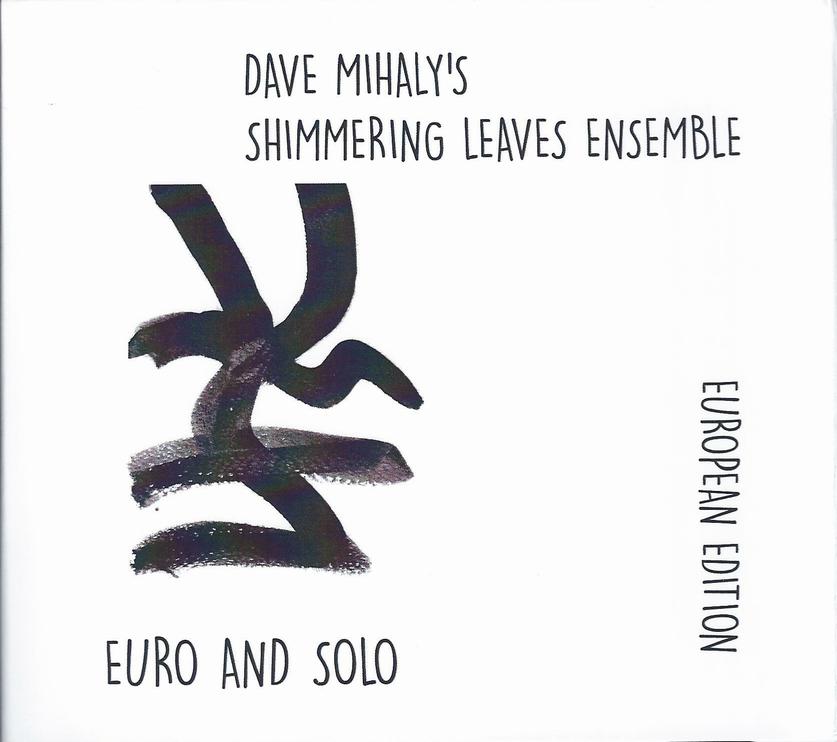 Multi-instrumentalist and songwriter Dave Mihaly will be known to Aural Innovations readers as a percussionist on a half dozen Mushroom albums. Euro and Solo is the follow up to his 2013 Rivers album and serves up an equally varied and genre challenged set. Eight of the 12 songs were recorded in Antwerp, Belgium with the trio of Mihaly, Jon Birdsong (another Mushroom alum), and Belgian musician Tim Coenen. The remaining four were solo pieces recorded in San Francisco where Mihaly is based.

Mihaly explores Jazz with bits of Americana on T’ai, which is like an acoustic mix of Mushroom and later period Soft Machine. A repetitive bass riff and sparse percussion are accompanied by a cool Jazz “cornetto” lead, lightly pleasant guitar, and an occasional intriguingly jarring zither strum. All The Time is a simple but oh so luscious guitar and vocals song that is given an added dimension of instrumental interest with an accompanying marimba. I like accessible songs that have an underlying not-so-normal “something”. And Mihaly is clearly unconcerned with normality as this is followed by the briefly cool and strange Eyebrow, which I won’t attempt to describe, though it acts as a fun “what’s this guy up to?!” bridge between All The Time and the aptly titled Blues For Izu, which demonstrates how meditatively Jazz flowing a basic combination of guitar, cornet and drums can be. Dig that light touch brush and sticks work on the drums. It’s like a Fred Astaire soft shoe. I like the rug cutting Salsa meets Bossa Nova groove on A Midnight Train. Altriciality is a drums and vibraphone solo piece that features light as a feather yet elusively smokin’ Jazz drumming and spacey melodic vibraphone. Mihaly adds a few logs to the drum fire on Antigoon, Brabo, And The River for some amped up energy level rhythmic gymnastics, soon joined by saucy cornet and ambient Jazz-Psych guitar which makes for a very cool Jazz-Psych-Prog-Ambient narrative excursion. I have to quote the track notes which describes the piece as “Method acting via sound: A sonic telling of the mythic origins of Antwerp, Be. The drums are Antigoon, the cornet is Brabo, and the electric 12 string guitar is the river”. Every Day Is Labor Day is a Mihaly singer-songwriter tune with a humorous edge to the lyrics – “Every day is Labor Day, and you’re my Jerry Lewis telethon” (maybe not intended to be humorous as the notes say “with the utmost respect”). Overboard is an energetic Jazz instrumental that once again has an ambient and even Psychedelic edge. We’ve got fiery drums and cornet jamming along with trippy bubbling electric guitar. I love the contrast between these elements that somehow come together so well. Midnight Dance is Mihaly’s rendition of a traditional Tohono D’Odham (Arizona based Native-American tribe) melody. The bass provides the tribal groove as the drums and cornet do their cool Jazz melodic jam which ebbs and flows in intensity. Petaluma Chan Chan is a light Jazz vocal number with lyrics in Spanish. Finally, Healing is a drums and ocarina (a type of flute) solo piece that ends the set on a freeform improvisational note.

You have to have cross genre tastes to appreciate Mihaly’s work. He could understandably be accused of being too all over the stylistic map. But my response to that would be to relax, put on the headphones, and give Euro and Solo a few close listens, because the whole is truly the sum of its singularly compelling parts.

For more information you can visit the Dave Mihaly web site at: http://www.davemihaly.com