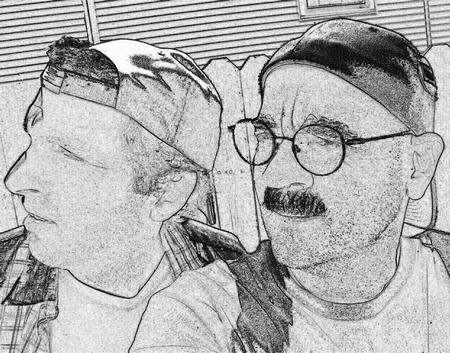 Fiesta In The Dank is a special release because it marks the 30th anniversary of the year that Charles Rice Goff III and Killr “Mark” Kaswan formed Disism. After lying low for a while, Disism got kicked started in 2012 when Goff found several cassette tapes of improvisations and collages that had been recorded between 1988 and 1995. This resulted in the Disism reDIScovery series in which Goff edited the recordings into various fun forms for public release.

Fiesta In The Dank consists of brand new recordings made in May of this year. The set opens with the appropriately titled Chains Batons Pipes And Hammers, which is a musical and rhythmic sound collage of bells, synthesizer, clatter percussion and jamming guitar, some of which gets pretty fuzzed and spacey. There’s a clear feeling of thematic development and the music evolves quite a bit for less than 7 minutes, with the mood getting intense at times. I also like the way pleasant melody and dissonance abounds in equal and enjoyably cohesive measure. Wake Of The Siluriformes is next and if you like Space Rock and have a taste for the avant-garde then this one’s for you. Freaky space electronics zig-zag and soar along with free-improv guitar and some kind of horn or kazoo, whimsically melodic acoustic guitar, myriad synths and plinkity electronic melodies. Lots of components here and they’re craftily blended in freakishly contrasting ways. Piranesi’s Prisons continues in a similar fashion, mixing eerie sci-fi effects and weirded out Psych guitar with toy instruments and more. The atmosphere gets hauntingly cosmic after a while, like some kind of Plan 9 From Outer Space meets Dr Caligari soundtrack sprung from a Robert Fripp and Residents collaboration. Ergo Ipso is a hallucinatory mix of experimental free-improv, oodles of electronics, both spaced out and playfully strange, plus an occasional sense that some Halloween soundtrack is going on. Birth Of Remodernism is another piece with a soundtrack feel, being simultaneously schizophrenic and off-kilter musical. Finally, Raspberry Sporidium and the closing title track play like one piece, having some cool Prog sounding keys, plus all kinds of other zany keys, typically played at the same time, and a wild mixture of space electronics, weirdly warbled guitar and robotic forest sounds (which may be the croaking frogs I see in the credits). It’s like someone mixed together an avant-garde toy instrument ensemble, a sci-fi soundtrack, a jug band and an oompah band. Wild!

What stood out most prominently for me on Fiesta In The Dank is the use and abuse, plus clever and always fun blending of multiple musical and sound components. The bit and piece sources are important but the craft is in the editing, making for lots to wrap one’s head around over multiple spins. Well done guys. Keep ’em coming.

For more information visit the Taped Rugs Productions web site at: http://tapedrugs.com
The CDR is available through the web site but a digital version can be downloaded for free at: https://archive.org/details/FiestaInTheDank