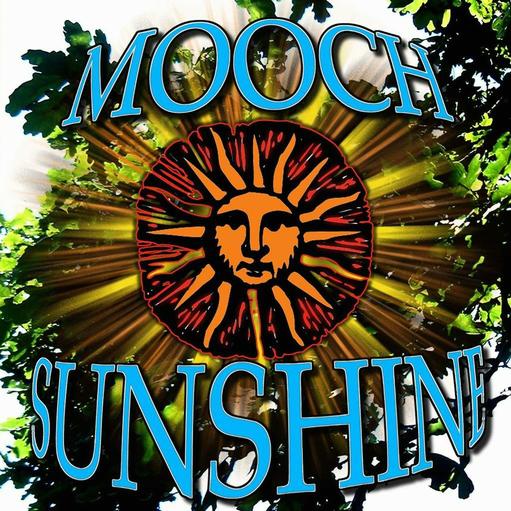 Mooch ship commander Steve Palmer has indulged his love of 60s Psychedelic Pop by releasing periodic “song” albums under the Mooch name. This has been a wee bit controversial for some fans who struggle to reconcile these songs with the Mooch Space Rock sound. But the fact is that even among the Mooch Space Rock albums there is no one “sound”, so I’ve welcomed them all. The song albums have been damn good and Steve’s latest, Sunshine, is a corker, serving up 20 new tunes, all quite compact at around the 2 minute range.

Sunshine will sound familiar to those who have heard the previous Mooch song albums, though Steve takes this one in some different, though classically 60s oriented directions. The Beatles, Their Satanic Majesties Request, The Bee Gees, early Moody Blues, I could go on with the 60s analogies.

Sunshine demonstrates how production and studio craftsmanship had such an influence on 60s Psychedelia. The songs are beautifully arranged with surreal and totally trippy orchestrations, classical music elements and swirly, mind-bending effects. Steve really scored getting Crystal Jacqueline on board, who sings lead on most of the songs, though Jill Carr makes a return, and Kev Ellis handles some of the lead vocals to surprising effect.

Standouts include He Left Me In The Afternoon, with its flowing sitar waves and cosmic drones that underscore the core Pop-Psych song. The Void goes way out into space, being simultaneously haunting and majestically trippy, with beautifully crafted orchestrations, effects, sitar and drones. Around The World is a production highlight that packs on the effects, being a catchy yet totally disorienting tune. There are lots of songs like these that have catchy melodic hooks but the production and effects make them enchantingly freaky.

Too Many People is a little different, sounding like it would be right at home on an album by The Association. Tell Me How is like Psychedelic Petula Clark. The pastorally Psychedelic Spring Song harks back to previous Mooch song albums with vocals by Jill Carr. Save Me has a jangly Byrds quality and features a very different vocal performance by Kev Ellis, who is delightfully outside his usual element on this album. I never would have guessed that was him singing. Ditto for Red, White & Blue and The Midas Touch, though Kev is a little more recognizable on the lysergically doomy and Psychedelically theatrical The Bad Trip Song.

I listened to this album several times in a short period and have decided that this is Steve’s best 60s song Mooch album yet. The songs are as well written and catchy as previous efforts, but the production, arrangements and effects take the music elsewhere in terms of 60s Pop-Psych. The album really lives up to the Sunshine title. Well done Steve.

CDR copies are available directly from Steve Palmer upon request. They come in hand-printed, recycled card sleeves, with printed art inside. Cost is £6 + postage to your country. Email Steve at dekray@yahoo.com