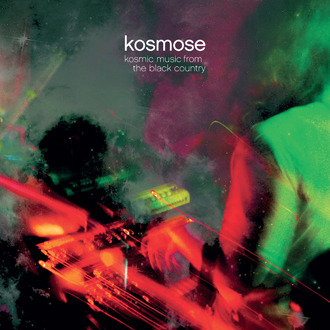 This archival set of music caught my attention because it represents a chapter in the history of Belgian musician Alain Neffe that was previously unknown to me. Neffe was a pioneer in the homemade music/cassette culture underground that emerged in the late 70s and took off in the 80s, becoming a prominent figure with his Insane Music for Insane People compilation cassettes. Neffe also founded some notable band projects, including Pseudocode (which Kosmose preceded), BeNe GeSSeRiT, Human Flesh, and others.

Throughout its history Kosmose had a fluctuating lineup, though the core was always the duo of Neffe and Francis Pourcel. All the music was improvised, with no discussion or preconceived notions of structure. Kosmose gave only 12 live performances, none occurring outside their home base of Charleroi, and these tapes exists only because Neffe recorded most of the band’s rehearsals and performances. The recordings were all made between 1973-78.

The first CD includes 8 tracks of music which reveal that classic exploratory Kosmiche was not exclusive to Germany. Listening to this music one would think this was a German band like Ash Ra Tempel or Agitation Free. But it’s from Belgium! One track features a guitar/drums ambient-soundscape excursion which later veers into a combination of jamming rhythmic minimalism and Prog keys meet Berlin school electronica, and still later we get some really cool spaced out guitar soloing. We’ve got an intense, energetic freakout jam, though at only 4 minutes it doesn’t take the time I would expect to develop and the sound quality isn’t as good as many of the other tracks so a little disappointing in that respect. There’s plenty of wildly Kosmiche Free-Jazz drum propelled jams. I like the exploratory Prog-Kosmiche track with wild fuzzed out keys that give the music a drugged out Ra Tempel meets Soft Machine on steroids feel. Another piece features a combination of heavy rocking Free-Jazz drumming, Sun Ra blasted off into space and 50s sci-fi soundtrack keys and haunting Kosmiche atmospherics. Some of the music isn’t all that far off from Big Band era Alien Planetscapes, which makes sense because Doug Walker was a Space Rock musician heavily influenced by Free-Jazz and Progressive Rock. Another standout is the CD 1 closing track which consists of heavy freak flag flying Arabian tinged Psychedelic Kosmiche with bits of Jethro Tull and Blues-Rock twang.

The second CD includes 3 tracks, all around 20 minutes or more. The first two struggle to justify their length. The opening 22 minute piece has lots of good ideas that run the gamut of elements I described on CD 1, but lacks direction and meanders a bit too much, though there are a couple of killer segments that get very emotionally intense and spaced out. The following 27 minute jam starts off in full deep space freakout mode with frenzied synth runs, soaring pulsating space waves, stinging guitar licks and loads of effects. It’s a solid kick off but things soon mellow and the musicians wonk around in an ultimately futile attempt to fall into a groove. So again we have lots of possibilities and exciting segments, particularly some impressive rocking sound collage, effects and guitar bits, but overall it’s not sustained for 27 minutes. Much more cohesive and stimulating throughout is the 19 minute closing track. It starts off intensely atmospheric, with a gradual but steady Kosmiche Rock with Berlin school vibe buildup. The swirling deep space synth waves, organ, energetic drumming and melodic/rhythmic bass are like a cross between German Kosmiche, Free-Jazz and early experimental Pink Floyd. I love the freaky cosmic synth work within an improvisational Jazz rocking context, and with the strange vocalization and rhythms the music has a Can quality at times.

In summary, what a pleasant surprise to learn of the isolated existence of a Belgian Kosmiche band. Fans of early experimental Krautrock/Prog-Psych/Electronics would do well to check this out.

Sub Rosa has released Kosmic Music From The Black Country in 2-CD and 2-LP editions. Due to space limitations the LPs have fewer tracks. I’ve got the double CD set which is a very nice triple foldout package with a 22 page information packed booklet in French and English.