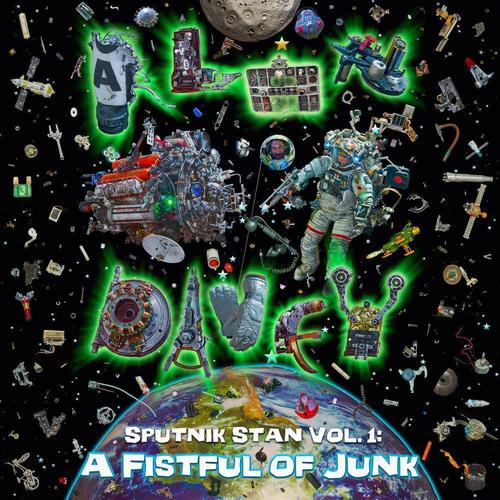 Alan Davey’s latest is a cracking fun adventure with Sputnik Stan and his ship computer Mel Function as they whiz around space collecting junk and hoping the Hubble Telescope fails because that’s the holy grail of junk. Stan likes to stop at the “U.F.O Cathouse” for a little R&R occasionally (which is conveniently attached to the International Space Station). And that’s the quickie summary of the story which is presented in music, lyrics, narratives and a 20 page comic book with absolutely freakin’ amazing artwork by Kevin M Sommers. Comic books are an IDEAL pairing for Space Rock!

Our story opens with spaced out atmospherics and effects as Mel reports to Stan, a gruff character who muses about his mission. We then launch headlong into Weigh It In Tranquility, a classic heavy duty Alan Space Rock ‘n’ Roller with pounding bass leads dueling with the guitar. But then we glide into melodic synth driven mission control mode which melts into Magnetosphere Disturbance, a pulsating Space-Prog number with hypnotic guitar leads that sing over the astral drifting synths. Zoie Green’s lead vocals are lovely on the mesmerizing Hubble’s Looking Tasty These Days. Stoic covers a lot of ground in just a few minutes, kicking off with electronic and compositional gymnastics. There’s a lot of zig-zagging around before we launch into the main song, with its Rap-like vocals against a chaotic but steady rocking acidic pulse. Delysid Funk is a get down funky tune with a nasty Hard Rock edge and cool dual guitar leads. And when the DJ voice comes in we learn that Stan was listening to this song by “The Eclectic Devils” on the radio. My Man On The Moon is another trademark Alan styled Space Rocker with a Prog and Metal infusion. Stan stops off at the U.F.O. Cathouse on Unidentified Flying Orgasm Parts 1 & 2, which is a mind-bobbling banquet of song, effects, and saucy swaggering Space Rock and Funk-Fusion when Stan hooks up with a couple of gals (played with appropriate nasty girl character by Sarah Davey and Alisa Coral). Finally, 18 Engines, One Mission is a destructive slab of fuzz Metal infused Space/Hawk Rock ‘n’ Roll that over 8 minutes takes plenty of time for both song, narrative and instrumental stretching out.

Throughout the set we hear Mel’s reports and Stan’s responses, and I got a kick out of Stan’s constant quips to Mel, as if the female voiced computer were his nagging spouse. Particularly humorous is when Stan is dum-dee-dum singing to himself as he accumulates Aluminum, Titanium, Uranium and Magnesium. Kudos to Frank J Morris for doing such a good job as the voice of Stan. In addition to Stan, Mel and the DJ interspersed between and within songs we’ve got various forms of Houston communications, who treat Stan as a Han Solo styled rogue. All well done and craftily mixed and stitched together to create a good time junk hero, Drive-In movie Space Rock adventure.

The CD will be available November 16. It’s limited to 1000 and comes inserted into the 20 page 10.25 x 7 inch comic book. The CD comes in a 2 panel cardboard sleeve and that slips into the comic which comes with a plastic protective sleeve to eliminate corner folding when storing. All in full colour! The LP should be ready a few weeks later. It’s limited to 200 and is a double colored vinyl package with Sides A & D being a 12″ and Sides B & C being a 10″. Alan plans to release Vol. 2 in 2017.