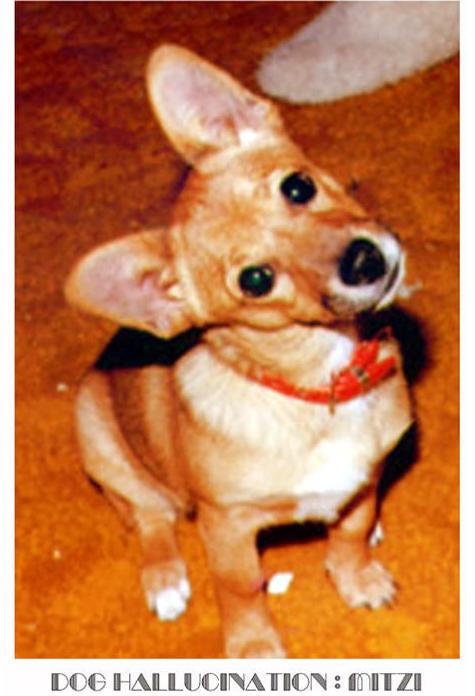 The new one from Dog Hallucination is a cassette release that features a swell photo of Mitzi the dog on the cover, a nice little booklet of artsy photography by D. Petri and overall some nice packaging and music that would make any dog proud (the cassette is housed in a DVD case and includes a 24 page art booklet). These are 4 track cassette and 16 track laptop recordings from 2004 to 2014 by D. Petri on guitar, drums, accordian, effects, zither, voice, cups, percussion, piano and field recordings. Doggy P. Lips on guitars, effects, drums and Jeremiah Gregg on sitar, piano, drums and co-writing. I usually match up the song descriptions with the song titles but since this is a cassette with endless song titles I’m just gonna do some kind of approximation since nothing really matters and this life is really just Mitzi’s hallucination.

RECALLING: Quiet, ambient piano coolness… and… onward thru the fog. PARALLEL TO SUNRISE: Yes, a driving beat with spanglic guitar… quite pleasant and space age phucked upness in a good way! Now comes the phat bass….. changes space gears into the tinkling of a bicycle bell? Quiet field recordings… creepin’ horns, sounds a bit like a Dr. Who Jack in the Bachs… yes, very strange, out there and uncategorizable. THOUR: Some drums and piano that are simple and nice… now the sitar… sounds like a Peter Sellers movie, “Birdy Num Num”. I’m kinda trippin’ out man. I wonder how old D. Petri and the gang are? Yes, goddammit, it’s art!!! Even if it’s not really 1967!?!? It’s blowin’ thru the eternal ’67 Jasmine of our minds… chillin’ in the upstairs bathtub while the zombies are ordering pizza on the downstairs phone. SENDING: A singing bowl? Like Roky Erickson said, “I’m transmitting but not receiving” but I am receiving a Dog Hallucination full on… an ominous rumble of swellness. LOOKING OUT OVER NIGHT LIT: More of the same in a slightly different gear. I think I’m having a Transcendentlin’?!!? MOMETHROES: And more, it’s all quite lurvely, I feel so blissed out that I guess I’ll put off that East Texas crime spree. UNCANNY RESEMBLANCE: Damn the tape’s over and I’ve got 16 more titles on this side of the tape. That D. Petri is a sneaky clever boy. BIRTH SIX: A)IMPATIENCE: Lopsided wierdo rock, loping across the room in an 1980’s sorta way!?!? B) THIS THEN THAT: Sounds like a soundtrack to a 1983 No Budget thriller starring not very famous 12 year olds but in a good way. C) IT EASILY FOLLOWS: Switches gears, a bit more untempo nerd rock. I’m feelin’ some mid 70’s Zappa!?! Mebbe not, I never listened to Zappa, just the Captain. Gets into a nice little groove, yeah these guys can play!! D) ROYING INPASSE: The morning sun peeping over Weird Man Mountain, lets take the rest of our Vitamin A and seize the day! THIN BETWEEN: A) CLOSEST PLACES: Scattershot rock and rhythm, some nice piano and drumming and it keeps a nice stumblebum of lefthanded lollygagginess. B) THE DIGNITY OF FIRST APPREHENSION: It’s good that D. Petri is apprehensive but has some dignity about it… the field recording of night time outside buggish critters. C) HERE: Some Art Rock along with the night bugs. Oh yeah, this tape has interesting song titles but “Here” is not that interesting of a song title! UNCANNY RESEMBLANCE: Kinda like backwards Oompa Loompa music… startsta sound like Glam Rock Hogs ah rootin’ in the Krautrock Black Forest… back to meditative blasturations of the Goologong… quite quiet, like a still still… and it’s over!!!! Keep it up guys.

Stream, download and purchase from the Dog Hallucination Bandcamp site at: http://doghallucination.bandcamp.com
Visit the Aubjects label web site at: https://aubjects.wordpress.com