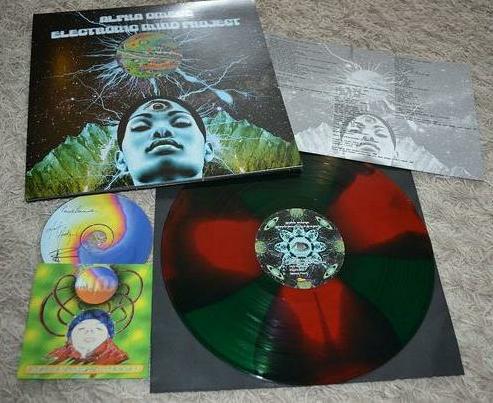 Clostridium Records follow up their 2013 release of the latest studio album from Australian Space Rockers Alpha Omega with a reissue of the band’s 2001 debut. This is pretty nifty… The vinyl is housed in a beautiful gatefold with killer artwork that is brand new and vastly superior to the original. The LP consists of 8 of the 10 original songs plus a live track not on the original. PLUS you get a CD with the original ten songs and original artwork. I reviewed this back in 2003 but here are my impressions after a fresh listen.

Alpha Omega’s musical and lyrical inspiration are pure Hawkwind and remind me a lot of early Darxtar, their Pseudo Sun offshoot, Xoo and the like. They sing of multiverses, worlds without time, space dust settling on the mind, floating in voids, sonic disturbance… you get the idea.

After a Brock/Calvert/Moorcock narrative introduction, Black Hole Approaching kicks off with Space Ritual freakout effects before launching into an at first acoustic/electric song and then a sonic attack Space Rocker. Cold Light Years is an acoustic/electric rocker with flittering electronics that is alternately raw chunky rocking and rhythmically drifting. Void Parts I & II consist of Hawk Rock that starts off with a dirty Garage infusion, but then after a blast-off interval goes blazing Space-Punk with snotty narrative vocals and head spinning oscillations. The Moment is space doomy but spirited and even has an anthemic quality. One of my favorite songs is the thematically intricate Private Hell, which starts off as Space Rock with a hip shakin’ 80s New Wave/Post-Punk edge before transitioning to a high intensity, down ‘n’ dirty Hard Rock/Space-Psych-Prog jam. Very cool. Scratching In Stone injects a dose of boogie-woogie in the Space Rock. Mystique features sound effects and floating space electronica with freaky alien spoken word. And my hands down favorite of the set, Space Pilot, is a heavy Space-Metal rocker with a killer combination of song and jam segments that will appeal to Krel and Spacehead fans. Finally, the live track The Eye was originally on the band’s Live at Terra Australis 2002 set and is a wild as hell heavy duty space rocker.

If you like bands who wear their Hawkwind influences on their shirtsleeves then Alpha Omega are for you. Clostridium also released their latest studio albums (from 2013) in their always beautiful packaged vinyl (CLICK HERE for my review of that one). NOTE that all are also available for streaming and download from the Alpha Omega Bandcamp site.