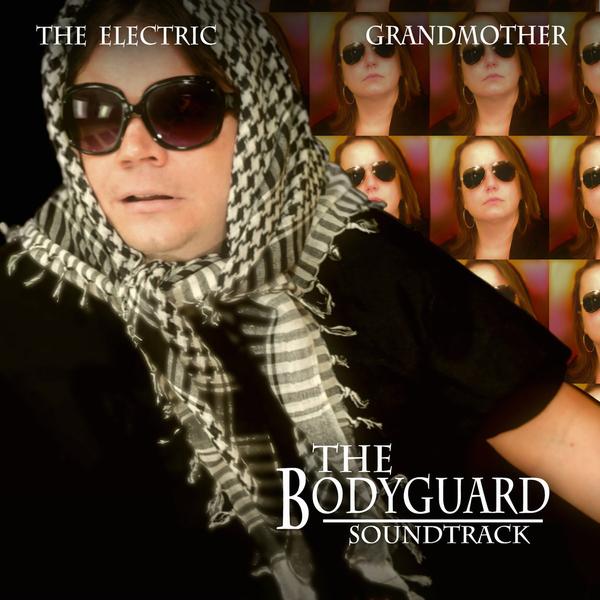 The Electric Grandmother are the Washington, DC based duo of Pete Faust and Mary Alice Hamnett who play seriously strange but good fun and whimsically freaky songs. They’re by no means Space Rock, but they can by spacey. And they sure are Psychedelic, but not in any traditional sense. Actually I’ve had a whacking good time trying to describe just what the hell they do, knowing full well that in the end you’ll just have to hear it for yourself.

The Bodyguard Soundtrack consists of 22 short songs, few much more than 2 minutes, which in some ways struck me as a lo-fi take on The Residents Commercial Album, plus lots of weirded out lo-fi takes on early 80s Synth-Pop/Post-Punk/New Wave. The songs are mostly upbeat and have catchy melodies, but it’s the weirder elements that linger. And the lyrics can get pretty crazy. I mean, how can you not like an album with song titles like Bill and Hillary Clinton Making Out in a Hot Tub Full of Poop and Pee?

Several songs brought to mind the Residents song feel, or maybe Renaldo and the Loaf doing Pop songs would be a better description. I like the punky robotic electro Pop tunes, especially the hilariously goofy and crazily spaced out We Threw Up On Nuns. There’s no shortage of bouncy spacey electro Sunshine Pop ‘n’ Roll songs that I thought were very well done. I liked the steroidal lo-fi electro Pop of Kiss Your Food, and there may be a thematic tie with the following number, Food Gives Us Shit, which is similar but has a dreamier flow despite the hyper-kinetic percussion.

There are also several cool and strange tunes with a Trip-Hop/Dub/Rap element. Three Men And A Baby features freaky yet upbeat Psychedelic Trip-Hop Pop that throws a smoke screen cover over some crazy lyrics. The Raptor Rap has a cool electro Rap-Pop groove. I really enjoyed the weird alien glom of spaced out Trip-Hop infused electro Pop on Fuller House. And Yo Palm Springs says a lot in less than 2 minutes, consisting of a traditional cotton field work song vibe within a Dub-Pop outer casing with lightly percussive and melodic sci-fi ambience. Freak-eeeeee!!

Did any of that make any sense? Really, there’s so much going on here that there’s no concise description or analogy that encapsulates what The Electric Grandmother is up to. But you’ve read this far so I’m assuming you’re intrigued so check ’em out.